Comments (0)
Add to wishlistDelete from wishlist
Cite this document
Summary
Political socialization enables individuals to get a good understanding of the political attitudes and behaviors. It takes place both at the…
Download full paperFile format: .doc, available for editing
HIDE THIS PAPERGRAB THE BEST PAPER91.4% of users find it useful 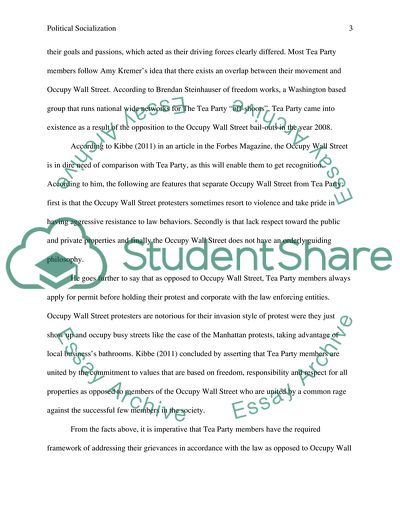 Tea Party Movement and the Occupy Wall Street Protest Political socialization refers to a life-long process that attributes its shaping effect to contributions by individuals and institutions. Political socialization enables individuals to get a good understanding of the political attitudes and behaviors. It takes place both at the individual and group level and goes beyond the acquisition of political attitudes and behaviors to include the learning and understanding of more advanced political ideologies. Some of the most common topics encountered here are Occupy Wall Street and The Tea Party Movement.
Occupy Wall Street is a grassroots movement, mostly composed of young citizens and it is funded by volunteers around the world. They do not depend on corporate sponsorship and their main aim is to fight for the right of the oppressed many. One of the slogans they use to air their grievance is “I am 99% and I have a voice”. On the other hand, The Tea Party is an Astro Turf of people with corporate sponsorship and the members are usually in mid life or above 60 years.
According to Gitlin (2011), Occupy Wall Street protests grew tremendously in October 2011 especially in Manhattan triggering comparisons with The Tea parties. Joe Biden explained the Occupy Wall Street protests as expression of grass root frustration by Tea Party Members. According to him, the protests were brought about by the breech of bargain that resulted to unfair levels of incomes. In his article “The Left Declares Its Independence”, Gitlin (2011) postulate that the “We Are The 99%” chant words that were used by Occupy Wall Street protesters was directed to the country’s 1% rich, that is composed of ‘financial predators and confident gamers’ who crashed the global economy without concern for anyone.
The statement “We Are The 99%” was synonymous to The Tea Party; it clearly exposed the intense differences. Both the Occupy Wall Street and The Tea Party abominated the elite but their goals and passions, which acted as their driving forces clearly differed. Most Tea Party members follow Amy Kremer’s idea that there exists an overlap between their movement and Occupy Wall Street. According to Brendan Steinhauser of freedom works, a Washington based group that runs national wide networks for The Tea Party “off-shoots”, Tea Party came into existence as a result of the opposition to the Occupy Wall Street bail-outs in the year 2008.
According to Kibbe (2011) in an article in the Forbes Magazine, the Occupy Wall Street is in dire need of comparison with Tea Party, as this will enable them to get recognition. According to him, the following are features that separate Occupy Wall Street from Tea Party; first is that the Occupy Wall Street protesters sometimes resort to violence and take pride in having aggressive resistance to law behaviors. Secondly is that lack respect toward the public and private properties and finally the Occupy Wall Street does not have an orderly guiding philosophy.
He goes further to say that as opposed to Occupy Wall Street, Tea Party members always apply for permit before holding their protest and corporate with the law enforcing entities. Occupy Wall Street protesters are notorious for their invasion style of protest were they just show up and occupy busy streets like the case of the Manhattan protests, taking advantage of local business’s bathrooms. Kibbe (2011) concluded by asserting that Tea Party members are united by the commitment to values that are based on freedom, responsibility and respect for all properties as opposed to members of the Occupy Wall Street who are united by a common rage against the successful few members in the society.
From the facts above, it is imperative that Tea Party members have the required framework of addressing their grievances in accordance with the law as opposed to Occupy Wall Street protesters. While members of Tea Party may have diverse opinions on various issues, they are united by common purposes that include less government involvement, lower taxes and finally freedom.
References
Kibbs, M. (2011, October 19). Occupy Wall Street is certainly no Tea Party. The Forbes Magazine, 1-2.
Gitlin, T. (2011, October 8). The left declares its independence. The New York Times, Sunday Review, 4.
Pilkington, E. (2011, October 7). Occupy Wall Street: tea party leaders admit similarities but not too many. The guardian, 2. Read More
Share:
Tags
Cite this document
(“Political Socialization Essay Example | Topics and Well Written Essays - 500 words - 1”, n.d.)
Political Socialization Essay Example | Topics and Well Written Essays - 500 words - 1. Retrieved from https://studentshare.org/history/1608594-political-socialization

CHECK THESE SAMPLES OF Political Socialization

...?Political Socialization Political socialization is the process by which the political values of a society are passed on to the next generation of citizens (“Political Socialization”). It is also the process by which the individual citizen, throughout their entire life, gains their political values and their ideas about politics (CliffsNotes). The agents of political socialization are those groups through whom these ideas are passed onto the individual citizens. These include the family unit, the education system, religious organizations, and the greater...
2 Pages(500 words)Essay

...Political Socialization Autobiography What is the first political event that you can remember? Describe it in detail. The first political event that is remembered by many would be the Great Depression during the end of the 1920s. The stock market crashed during October 29, 1929 and wiped out 40% of paper vales of common stock. Many people also lost their jobs while others were recruited in the Civilian Conservation Corps (CCC) to earn $30 a month. Views on how to solve the depression were the main tool for politicians on whether they will win or lose the election. Roosevelt’s New Deal program aimed to stop the depression and start building the state’s economy. 2. What is...
3 Pages(750 words)Essay

... Section/# Political Socialization When speaking about one’s political socialization, it is a topic that involves ahost of different issues. The can include but are not limited to, personal experience with the political process, religious beliefs or lack thereof, educational influences, as well as world views and/or belief systems espoused by the family in which one was raised. As such, this brief analysis will attempt to weigh and analyze the type of different political socialization experiences that have shaped the way in which this author engages or chooses not to engage in the political arena of our nation. The first of these factors can be traced to the fact that although I consider myself to be a believer, I do not allow my... involved...
3 Pages(750 words)Essay

Political socialization is a very important process that creates and conveys the political culture of a society. Examine one of

...? Political Socialization Political Socialization Introduction Western society is supposed to be free. We are free to believe as we wish in an ideological, religious, and cultural sense. For the most part, the citizenry is permitted to carry on living their daily lives in the way that they see fit as long as they do so within socially constructed norms. It is the reality, however, that much of our mindset comes from what other people want us to believe. Access to information is critical in order to ensure that we possess enough knowledge in order to make our own informed decisions on a wide variety of issues. The primary source of that information comes from the media. While the media in most western countries runs independently... F....
10 Pages(2500 words)Essay

...? Political Socialization and Ideology Political Socialization and Ideology INTRODUCTION: As humans it is quite natural for us to involve amongst each, share each other's issues and concern, mutually cooperate and work together in order to form a stable society that is governed on principles of fraternity, brotherhood, equality, collaboration, peace and love. When a society is formed then the need arises which requires individuals to have some sort of governance and leadership in order to maintain and regulate peace within the region. This is the point where politics emerges and individuals start to develop their cognition and understanding of...
5 Pages(1250 words)Essay

...Review of Political Socialization with reference to African American groups ---- Prajakta Kanegaonkar Political socialization is a term which has gained a lot of significance over a period of time. This process helps a person understand where voting patterns come from. But off course we have to note that voting represents the direct outcome of any impact on the changes happening in the thought process of the society. . The society over a period of time builds itself on the basis of solid thought process. This process does not take place overnight. It is rightly observed that revolutions and rebellions are usually started by the young of the society. Here we need to note...
2 Pages(500 words)Essay

...Political Socialization, Gatekeeping and Agenda-setting Method Political socialization is a concept that deals with the development procedures by which children and adolescents acquire various features of a political culture such as attitudes, beliefs, values, behavior patterns and habits that essentially shape a political community. According to Davidson (1983), it is the “Study of the developmental processes by which children and adolescents acquire political cognition, attitudes and behaviors” (p. 20). Indeed the process of political socialization is a sum-total of all the cognitive,...
2 Pages(500 words)Essay

...The Role of Mass Media in Political Socialization Introduction Janda et al. defined mass communication as the process of transmitting information toa widely diverse and large population (106). Mass media serve as the means for disseminating such information. The mass media function to inform the public about current issues and events; thus, it has an “agenda-setting effect” (Janda et al. 106). Doris Graber conducted a study on the influence of mass media in American politics. The findings of the study showed that high school students obtain greater amount of information from mass media compared to their teachers, friends, and family. In addition, information from mass media becomes the...
11 Pages(2750 words)Thesis

15 Pages(3750 words)Essay
sponsored ads
Save Your Time for More Important Things
Let us write or edit the essay on your topic "Political Socialization" with a personal 20% discount.
GRAB THE BEST PAPER

Let us find you another Essay on topic Political Socialization for FREE!