Comments (0)
Add to wishlistDelete from wishlist
Cite this document
Summary
The political issue on Kissinger’s secret visit to China created a controversy that changed the diplomatic relations between China and the United States. Under the command of the former U.S. President Nixon, the National Security Advisor, Henry Kissinger, went to a secret…
Download full paperFile format: .doc, available for editing
HIDE THIS PAPERGRAB THE BEST PAPER95.8% of users find it useful 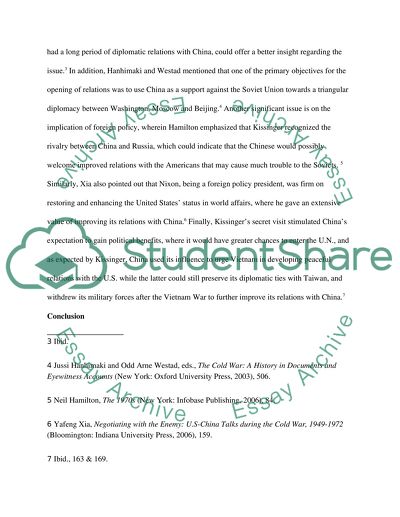 Introduction The political issue on Kissinger’s secret visit to China created a controversy that changed the diplomatic relations between China and the United States. Under the command of the former U.S. President Nixon, the National Security Advisor, Henry Kissinger, went to a secret visit in China to conduct and discuss matters that truly made a significant history of American, foreign policy. As Fergusson noted, Kissinger’s secret trip to China in 1971 has made two areas of its foreign policy be consistent, and these include the renewal of the United States’ relationship with China and Kissinger’s strategic thinking influenced every president from Kennedy and up until the current U.S President Obama. 1
This paper seeks to present three arguments on the issue regarding Henry Kissinger’s secret trip to China in 1971.
Arguments
As manifested by historical events, Kissinger’s trip to China could be considered as an essential factor that strengthened the U.S-China relations. Fergusson further noted that the substantial matters discussed during his trip in 1971 enabled the United States’ opening to China, and at the same time, China began to open its relations with the United States, which was actually driven by “Mao Zedong’s fear of encirclement.”2 Under such circumstance, a potential argument could be justified such that if it was not for China’s opening to the United States, China would not emerge to be America’s largest foreign holder and as to how it would utilize its present economic power is a crucial matter that needs to be addressed, wherein Kissinger, who had a long period of diplomatic relations with China, could offer a better insight regarding the issue.3 In addition, Hanhimaki and Westad mentioned that one of the primary objectives for the opening of relations was to use China as a support against the Soviet Union towards a triangular diplomacy between Washington, Moscow and Beijing.4 Another significant issue is on the implication of foreign policy, wherein Hamilton emphasized that Kissinger recognized the rivalry between China and Russia, which could indicate that the Chinese would possibly welcome improved relations with the Americans that may cause much trouble to the Soviets. 5 Similarly, Xia also pointed out that Nixon, being a foreign policy president, was firm on restoring and enhancing the United States’ status in world affairs, where he gave an extensive value of improving its relations with China.6 Finally, Kissinger’s secret visit stimulated China’s expectation to gain political benefits, where it would have greater chances to enter the U.N., and as expected by Kissinger, China used its influence to urge Vietnam in developing peaceful relations with the U.S. while the latter could still preserve its diplomatic ties with Taiwan, and withdrew its military forces after the Vietnam War to further improve its relations with China.7
Conclusion
As the U.S. Secretary of State, Kissinger truly played a crucial role in the development of the US-China diplomatic relations. In fact, his secret trip to China was a huge success that made him influential in terms of foreign policy, where he contributed much of America’s success in world affairs. There may have been some criticisms regarding the secrecy of his visit to China, yet it was able to create a positive impact towards the Chinese in fulfilling their common political interests.
Bibliography
Fergusson, Niall. “Dr. K’s Rx for China,” The Daily Beast, 2011.
Hamilton, Neil. The 1970s. New York: Infobase Publishing, 2006.
Hanhimaki, Jussi, and Odd Arne Westad, eds. The Cold War: A History in Documents and Eyewitness Accounts. New York: Oxford University Press, 2003.
Xia, Yafeng. Negotiating with the Enemy: U.S-China Talks during the Cold War, 1949-1972. Bloomington: Indiana University Press, 2006. Read More
Share:
Tags
Cite this document
(“Henry Kissinger 1971 secret trip to China Thesis”, n.d.)
Henry Kissinger 1971 secret trip to China Thesis. Retrieved from https://studentshare.org/history/1605183-henry-kissinger-1971-secret-trip-to-china

CHECK THESE SAMPLES OF Henry Kissinger 1971 secret trip to China

...of joining in the Vietnam War whatsoever or for that matter launching an attack on any other American congruent interests. Early December 1970, the government of China communicated via Khan the president of Pakistan to the United States’ National Security Advisor Henry Kissinger welcoming the special envoy of President Richard Nixon to China. In response, Kissinger indicated America’s readiness for holding high-level meetings with China. China reaffirmed the message by depicting that the country was willing and ready to receive in public the American envoy in Beijing to hold direct meeting and discussions....
16 Pages(4000 words)Research Paper

...? A Clockwork Orange (1971 movie) The film A Clockwork Orange, by the renowned director Stanley Kubrick, is basically a science fiction. One can easily identify that the director shows keen interest to comment on the contemporary society. Almost all the problems faced by human beings are vividly portrayed by the director. Besides, the director makes use of the characters as his mouthpiece to communicate with the viewers. Thesis statement: An investigation to unearth the scope of the problems faced by human beings, within the film A Clockwork Orange by Stanley Kubrick. Plot summary The plot revolves around the protagonist Alex DeLarge, who is an outlaw and a member of a gang involved in anti-social activities. The film...
2 Pages(500 words)Essay

...?Blue Mountains, Sydney Australia The Blue Mountains are found only 50km away from the capital, Sydney, d after the characteristic blue haze that the area has when viewed from a distance. They have been inhabited for several thousand years, but have recently become a tourist attraction featuring such sights as the Three Sisters (a sandstone rock formation) and activities like four-wheel driving, abseiling and scenic railways. The area is a combination of a World Heritage Area, a town and a major tourist attraction, and this is what makes the area so intriguing and the reason for the field trip which is the topic of this report, which focuses on the Three Sisters. The Trip As the area is most easily...
6 Pages(1500 words)Essay

...Whity (1971) by Rainer Werner Rainer Werner, a renowned German movie director and actor, wrote the movie known asWhity, in 1971. He is commonly known as Fassbinder and was born in 1945. It is one of Fassbinder's personal and famous developments in his career. The movie remains fresh in the minds of the viewers long after his death in 1982. Until his death, Fassbinder had written a number of movies including Avant-garde, Katzelmacher, The American Soldier, Beware of a Holy Whore, World on a Wire, just to name but a few. It shows how talented the film writer was though he died at an early age of thirty-seven years. The stars in the movie include Ron Randell, Hanna Schygulla and Katrin Schaake (Itchload...
5 Pages(1250 words)Essay

...the role of Kissinger and Nixon in the cold war. Although the two individuals mocked each other’s integrity at times, they made decisions that brought about international consequences. They managed to execute their deals without publicity even if that meant defying the congress. They sought to ease the tension of the war by establishing a triangular front in diplomacy. Despite the criticisms, some of their policies had positive effects on easing the tension caused by the cold war (Banyan, 2007). References Banyan, W. (2007). Nixon, Kissinger and the New World Order: A Revisionist History. Retrieved on October 4th 2012, from http://www.martinfrost.ws/htmlfiles/third_section/nixon_kissinger.html Burr, W....
4 Pages(1000 words)Research Paper

...﻿I almost did not see the bear at first; it was standing quietly and very still watching us from within the dense bush, its dark coat blending easily with the dark background of dead and dying leaves. It was less than ten feet away and its eyes were focused intently on Kelvin, my friend was on his knees trying to figure out north using the old rusty compass. The bear was huge and its small beady eyes were focused his back with what appeared to my terrified eyes; an evil glint. My first instinct was to shout a warning; however I suppressed that as well as the urge to run since I knew when faced with a bear, any sudden noise or movement should be avoided since it might excite the animal into attacking. “Hey Kelvin”, I said... almost did not...
7 Pages(1750 words)Essay

...and policies. Together, they had both achieved their goals in the international affairs. ("Henry") From then on, Kissinger was among the most popular and the most controversial personalities in the US government. Being the national security adviser to Nixon's administration, he had concentrated on gaining power for the United States over any other countries in the international context. He focused on professional foreign services, secret negotiations with North Vietnam, the Soviet Union, and China. One of his considered 'successes' in foreign affairs was his negotiations on the Paris agreements of 1973 that had ended the US direct involvement in the Vietnam War. He also...
12 Pages(3000 words)Essay

Entitlement Programs and the handicaps that go along with having them

...the Soviet Union. In 1971 a move was made to improve relations, China invited a table tennis team to China; hence the term ping pong diplomacy. The US response was to support Chinas entry into the UN, something it has always vetoed. China entered the UN in 1972 "The disarmament of America was a result of the SALT agreements with the Soviet Union, and the passage of the Arms Control and Disarmament Act by the US Congress, while the Soviet Union, Red China and Israel continued to strengthen their nuclear arsenals. We stand today weakened from within. All of the Henry...
35 Pages(8750 words)Essay

...diplomatically, undermine Communist alliances, and increase leverage over the USSR (Ragone & Velshi 34). Q. But, still, the process of setting up this meeting must have been difficult. How did it all come together? A. True, mistrust between the US and the PRC was a huge barrier. Henry Kissinger was first sent to China to break the ice in 1971. In fact, he had to go there twice to convince the Chinese officials that the US was willing to reconsider normal relations with china (Ragone & Velshi 34). The US also moved advocate for China’s representation in the UN with an added sweetener of representation in the UN Security Council. Q. That...
5 Pages(1250 words)Essay
sponsored ads
Save Your Time for More Important Things
Let us write or edit the thesis on your topic "Henry Kissinger 1971 secret trip to China" with a personal 20% discount.
GRAB THE BEST PAPER

Let us find you another Thesis on topic Henry Kissinger 1971 secret trip to China for FREE!