Comments (0)
Add to wishlistDelete from wishlist
Cite this document
Summary
Richard Helms deliberately lied in front of the Senate about the involvement CIA had on 7 February 1973 in Chile.1 Similarly, William Colby lied in front of the church committee in the year 1975 denying the involvement of US in Angola. These men stood at the position where they…
Download full paperFile format: .doc, available for editing
HIDE THIS PAPERGRAB THE BEST PAPER91% of users find it useful 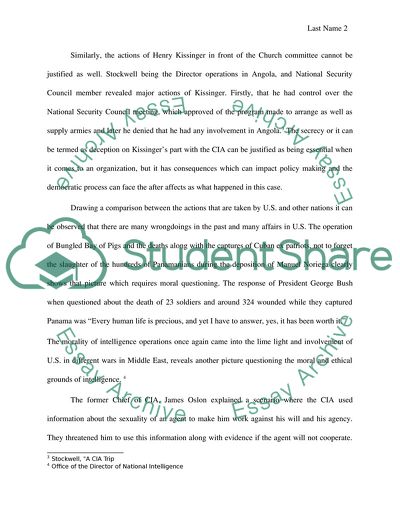 Extract of sample "Ethical and Moral Issues In Intelligence"

Ethical and Moral Issues in Intelligence Introduction Richard Helms deliberately lied in front of the Senate about the involvement CIA had on 7 February 1973 in Chile.1 Similarly, William Colby lied in front of the church committee in the year 1975 denying the involvement of US in Angola. These men stood at the position where they had to choose between the ethical issues of honor to their oat or to tell the truth. This made them face the extreme ethical dilemma and made Colby say:
“I found myself in a position of conflict. I had sworn my oath to protect certain secrets. I didnt want to lie. I didnt want to mislead the Senate. I was simply trying to find my way through a very difficult situation (Powers 62).”2
No one can clearly explain their intentions and their involvement with intelligence, but in the end, it was all about the individual’s moral and ethics.
Similarly, the actions of Henry Kissinger in front of the Church committee cannot be justified as well. Stockwell being the Director operations in Angola, and National Security Council member revealed major actions of Kissinger. Firstly, that he had control over the National Security Council meeting, which approved of the program made to arrange as well as supply armies and later he denied that he had any involvement in Angola.3 The secrecy or it can be termed as deception on Kissinger’s part with the CIA can be justified as being essential when it comes to an organization, but it has consequences which can impact policy making and the democratic process can face the after affects as what happened in this case.
Drawing a comparison between the actions that are taken by U.S. and other nations it can be observed that there are many wrongdoings in the past and many affairs in U.S. The operation of Bungled Bay of Pigs and the deaths along with the captures of Cuban ex patriots, not to forget the slaughter of the hundreds of Panamanians during the deposition of Manuel Noriega clearly shows that picture which requires moral questioning. The response of President George Bush when questioned about the death of 23 soldiers and around 324 wounded while they captured Panama was “Every human life is precious, and yet I have to answer, yes, it has been worth it.”
The morality of intelligence operations once again came into the lime light and involvement of U.S. in different wars in Middle East, reveals another picture questioning the moral and ethical grounds of intelligence. 4
The former Chief of CIA, James Oslon explained a scenario where the CIA used information about the sexuality of an agent to make him work against his will and his agency. They threatened him to use this information along with evidence if the agent will not cooperate. The given illegality along with social stigma attached with homosexuality to be present in the targets home county this was a huge threat. 5 This was wrong on the part of intelligences on both moral and ethical grounds as it could have major implications on life of the agent.
Conclusion
In concluding, the ethical and moral issues are important in the intelligence. Current work represents several real life examples which involve the ethical and moral issues in the intelligence.
Work Cited
Godfrey, "Ethics and Intelligence," p. 625.
Powers, T."Inside the Department of Dirty Tricks," Atlantic (August 1979), p. 62.
Stockwell, "A CIA Trip," p. 26.
Office of the Director of National Intelligence, [webpage]. available from: http://www.dni.gov/index.php/newsroom/speeches-and-interviews/177-speeches-interviews-2006
Olson, J. Fair Play: The Moral Dilemmas of Spying (Washington, D.C.: Potomac Books, 2006) p.46 Read More
Share:
Tags
Cite this document
(“Ethical and Moral Issues In Intelligence Admission/Application Essay”, n.d.)
Ethical and Moral Issues In Intelligence Admission/Application Essay. Retrieved from https://studentshare.org/miscellaneous/1607999-ethical-and-moral-issues-in-intelligence

“Ethical and Moral Issues In Intelligence Admission/Application Essay”, n.d. https://studentshare.org/miscellaneous/1607999-ethical-and-moral-issues-in-intelligence.
Comments (0)
Click to create a comment or rate a document

CHECK THESE SAMPLES OF Ethical and Moral Issues In Intelligence

...﻿Ethical and Moral Issues regarding Intellectual Property Introduction   Most high-tech industries are distinguished by their intellectual properties and these are highly important for them in relation to their brand, research, innovation and discovery of new processes and products. But, a major challenge they face is to protect intellectual property as it has become a growing trend that small-baby fake companies in other countries more often counterfeit world-class brands, copyrights, patents and they market their creations under these intellectual properties. Though most countries and worldwide authorities have developed IP protection laws to help these companies protect their...
4 Pages(1000 words)Research Paper

Ethical and moral issues via Internet

...). This decision raises serious moral and ethical issues in a highly globalized world where the flow of information is important for commerce and maintaining social order. Chinese government is a communist’s state and the flow of information is highly regulated not only in the internet but also in the other forms of communication including the media and other electronic means such as television and radio (Stephen, 2005). In largely capitalistic world, Chinese government attempts to maintain their preferred form of government at all costs by preventing free flow of information. One of the main characteristics of communism is denying the citizens the freedom of expression and association...
1 Pages(250 words)Essay

Ethical issues with the artificial intelligence of computers

...? ETHICAL ISSUES WITH THE ARTIFICIAL INTELLIGENCE OF COMPUTERS Introduction The ethical and moral concerns related to the potential future establishment of devices, with general intellectual abilities, extensively outperforming those of human beings are reasonably different from ethical issues emerging in modern information and automation systems. Such artificial intelligence would not be just a different technological innovation; it would rather be another most crucial development ever created, and would result to explosive development in all technological and scientific sectors, as the artificial intelligence would operate with superhuman capacity and efficiency. Additionally, to the level that ethics is a rational recreation... these...
6 Pages(1500 words)Research Paper

...Ethical issues in Journalism Ethics is set of rules in relation with values and morals that people follow in day-to-day lives. Ethics not only used for personal purposes but also in every individual’s career or profession (Angle 44). Journalism, as one of the professions, has also set of guidelines for better execution of the profession. In line with this, there are four fundamental ethics in journalism. These include “seek the truth and report it, minimize harm, act independently, and be accountable” (U.S. Society of Professional Journalists 2). With each of these, there are more particular codes that need to be followed by journalists....
6 Pages(1500 words)Essay

...Running Head: Moral Issues Moral Issues Inserts His/Her Inserts Grade Inserts 07 July 2009 Ethics integrity is an important aspect of moral and ethical issues of modern corporations. The designation "professional" is highly desired in engendering industry and profession. Engineers take courses of action that seem on the surface to be against their economic interest because they want to protect the privilege of being known as professional. Engineers who seek admittance must demonstrate understanding of and acceptance of the profession's language. The engineering knowledge possessed by each profession is a...
8 Pages(2000 words)Essay

...Moral Intelligence Introduction Moral Intelligence is the mental capa to determine how universal human principles should be applied to our values, goals, and actions (Lennick & Keil, 2007). It is our ability to distinguish what is right from wrong. Universal Principles are those beliefs about human conduct that are common to all cultures regardless of gender ethnicity, religion, etc. Ethics is the set of moral principles or set of values and standards that we have come to adopt since childhood. Intelligence makes a difference but one must learn how to use it properly as a tool to reach their best potential and capture...
9 Pages(2250 words)Essay

Ethical and Moral Issues in Business

...Society depends on the moral conduct of its members to function properly. People often face ethical issues in their everyday lives as well as in the workplace. It is important not to confuse ethics and moral issues. These concepts may be interrelated, but they have important differences. “Morals define personal character, while ethics stress a social system in which those morals are applied” (Wisegeek, 2012). Morals are an introspective view of the morality of the person. The culture where a person is raised can affect the ethical...
2 Pages(500 words)Essay

...Legal, ethical, or moral Legal or ethical/ moral Issue MONTEJO Hospital Rules for Hospital that Deported Jimenez The Montejo Case is a legal issue than moral considering the various legal guidelines on the decisions in the case. The other reason making the case a legal issue is that the transportation of Jimenez to Guatemala was in response to a court order and the hospital was following decisions made during a court proceeding (Florida District Court of Appeal, August 23, 2006). That decisions made were guided by a court order and presence of laws and regulations including Florida laws on court proceedings and the false imprisonment as cited in the case depict the legality of the issue. Jimenez deportation and the suit against... of a...
2 Pages(500 words)Research Paper
sponsored ads
Save Your Time for More Important Things
Let us write or edit the admission/application essay on your topic "Ethical and Moral Issues In Intelligence" with a personal 20% discount.
GRAB THE BEST PAPER

Let us find you another Admission/Application Essay on topic Ethical and Moral Issues In Intelligence for FREE!