Comments (0)
Add to wishlistDelete from wishlist
Cite this document
Summary
At that time, Ethiopia had valuable exports and she was also forming a new army with the assistance of many European powers which was purchased by the money of the Ethiopians. The military was undersize by European standards contrary to the Italians thus it stressed them a lot…
Download full paperFile format: .doc, available for editing
HIDE THIS PAPERGRAB THE BEST PAPER92.2% of users find it useful 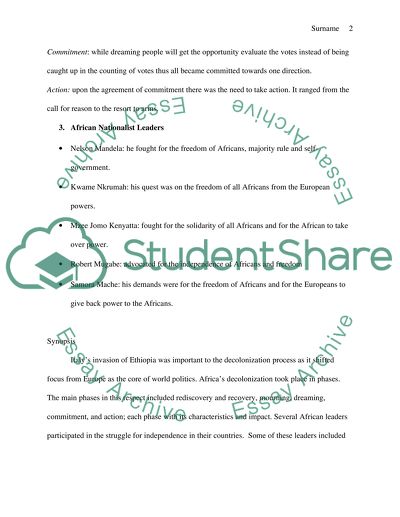 The Importance of the Italian Invasion of Ethiopia in the Decolonization Process At that time, Ethiopia had valuable exports and she was also forming a new army with the assistance of many European powers which was purchased by the money of the Ethiopians. The military was undersize by European standards contrary to the Italians thus it stressed them a lot. Following the investment in Somalia, France, seeking to have Italians safely use their destructive energy, gave the way to an attack on Ethiopia instead of concessions in respect of Tunisia.
2. Phases of Decolonization
Rediscovery and recovery: people who were colonized were inexorably suffering from inferiority in terms of their cultural and social background, according to Laenui(2). However on the move to decolonization people started rediscovering the importance of their culture and society and started to recover from the inferiority.
Mourning: this was the natural outgrowth of the phases of decolonization. People lamented about their victimization which began their process of their healing from colonization.
Dreaming: most crucial face in this process as the total scene of possibilities were expressed, measured through debates, discussions and building dreams towards the establishment of new social order.
Commitment: while dreaming people will get the opportunity evaluate the votes instead of being caught up in the counting of votes thus all became committed towards one direction.
Action: upon the agreement of commitment there was the need to take action. It ranged from the call for reason to the resort to arms.
3. African Nationalist Leaders
Nelson Mandela: he fought for the freedom of Africans, majority rule and self-government.
Kwame Nkrumah: his quest was on the freedom of all Africans from the European powers.
Mzee Jomo Kenyatta: fought for the solidarity of all Africans and for the African to take over power.
Robert Mugabe: advocated for the independence of Africans and freedom
Samora Mache: his demands were for the freedom of Africans and for the Europeans to give back power to the Africans.
Synopsis
Italy’s invasion of Ethiopia was important to the decolonization process as it shifted focus from Europe as the core of world politics. Africa’s decolonization took place in phases. The main phases in this respect included rediscovery and recovery, mourning, dreaming, commitment, and action; each phase with its characteristics and impact. Several African leaders participated in the struggle for independence in their countries. Some of these leaders included Kwame Nkrumah of Ghana, Jomo Kenyatta of Kenya, Robert Mugabe of Zimbabwe, Nelson Mandela of South Africa and Samora Mache of Mozambique.
Work cited
Laenui, Poka. Process of decolonization. 2006. Web. 13 September, 2012 http://www.sjsu.edu/people/marcos.pizarro/courses/maestros/s0/Laenui.pdf Read More
Share:
Tags
Cite this document
(“Africa's Road to Independence Essay Example | Topics and Well Written Essays - 250 words”, n.d.)
Retrieved from https://studentshare.org/history/1602856-africas-road-to-independence

CHECK THESE SAMPLES OF Africa's Road to Independence

...?Running head: KOSOVO INDEPENDENCE Kosovo Independence Insert Insert Grade Insert October 29, Kosovo Independence Introduction Edmund Burke conceived society as being made up of complex web-work of institutions that undergo continuous growth (Raeder 1). Social order and political progress in most societies emerge from the interplay of the way social institutions are managed and run, as well as its overall relation with social forces. As a result, most societies become victims of social and political conflict when social institutions fail per se to regulate the social behaviors of diverse population and interest groups (Raeder p.1). Kosovo gained independence in 2008 when...
5 Pages(1250 words)Essay

...Auditing Auditing Auditing is an incredibly important matter in the world today, and if you want to learn about a matter such as this, then there are several embedded matters that you will need to inform yourself on first; such as the fact that an auditor's objective is basically defined as that of "to provide a high level of assurance through the issue of a positive expression of opinion that enhances the credibility of an assertion about an accountability matter" (Gay & Simnett, 2003, p.745). However the fact of this auditor to be independent is clearly the most important factor here, and independence is defined as being the "ability to withstand pressure from management influence when conducting an...
10 Pages(2500 words)Essay

...Running Head: Independence Day Meaning of Independence Day Introduction: Every year on July four the United s celebrates its independence day, different meanings have been attached to this day depending on the understanding the history of the pre colonial period. Following the colonization of the united state by the British a revolution war broke in April in 1975, the British responded to this rebellion by passing prohibitive acts and hiring German mercenaries to suppress the rebellion. There were increased efforts to declare the 13 states independence from British rule and this led to the formation of a committee by congress to draft the declaration,...
5 Pages(1250 words)Essay

...promoted ethnicity. One of the major consequences of the 'indirect rule' by the British in Ghana, Kenya and South Africa was the establishment of traditional rulers in these countries who wanted to conserve culture and tradition. The emphasis on traditional ruler vs. educated elite had an important impact on the nationalization process of these nations. In a profound analysis interrogating the reasons for the failure of African nationalism in the post-independent period, which is a challenging task, the impact of 'indirect rule' of the British on ethnicity and nationalism of the African countries becomes palpable. Significantly, the workings of imperialism in West Africa indisputably...
4 Pages(1000 words)Essay

...AUDITOR INDEPENDENCE Audit is the process of evaluating a set of financial ments, processes, systems to comment on the vera and authenti of the same, that the books of accounts represent a true and fair view of state of affairs an enterprise. Investors, regulators, creditors and other third parties place credence on audited statements. It can be clearly seen that if audit is to be carried out in free and objective manner the auditors must be independent in fact (actual independence) and if their opinions are to be accepted auditors must also appear to be independent. Corporate world has time and again been rocked by scandals and sudden failures, of these, Enron & World Tel are considered water shed cases due to the sheer size... of their...
4 Pages(1000 words)Essay

Black people in south africa in the 90 s

... ones. It is that disparity which stands before us here. The Union of South Africa was formed into a dominion of the British Empire in 1910, whereupon racial segregation and economic isolation became an institutionalized policy of the white-dominated government (South Africa 1998). Looking back, this was by far the decision which would have the greatest consequences upon the future of the country. Even if the ways and means whereby race-based economic disparities continued to plague South Africa’s black population throughout the 1990’s were as widespread as the disparities themselves, one area for which the country should receive praise is in the realm of literacy rates and infant mortality. By 2000 literacy rates had risen... ), a...
6 Pages(1500 words)Essay

...Africa: A fragile peace one a bloodied continent The article, Africa: A fragile peace one a bloodied continent, was written by UN undersecretary general of peace keeping operations, Mr. Jean Marie Guehenno. It was published on International Herald Tribune on 29 January 2004. This article explains the bloody wars and internal agitations going on inside African continent and the future of peace keeping processes in Africa. The major points of this article are; Peace keeping efforts in Africa will meet success only if the African states and their supporters continue to be innovative and learn from their past mistakes. The killing of innocent people stopped up to certain...
5 Pages(1250 words)Article

...Your Food Security in Sub-Saharan Africa Food insecurity as a result of drought, famine, political instability, economical inadequacy, conflicts, and HIV has exposed 38 million African people to immediate threats of stability, security, and peace (Morris qtd. in Clover 6).This research paper analyses the article titled, “Food Security in Sub-Saharan Africa” written by a researcher at Institute of Security Studies (ISS), Jenny Clover. The article was written in 2003 and published in African Security Review. The main objectives of the article are to understand the concept of food security and identify the factors that led to lack of food security in Africa in general and Sub-Saharan Africa in particular. Brief Summary Access to food... is a...
5 Pages(1250 words)Article

...Reaction Paper to Nyang’oro: Africa’s Road Synopsis Nyang’oro’s article, Africa’s Road to Independence, discusses matters regarding how African nations attained their independence. The article starts with a discussion of the colonization procedure, as well as the resistance by Africans to their colonial powers. The article also discusses how nationalism went through changes right after the Second World War. According to Nyang’oro, African forces, after the Second World War, started to replicate what other forces were doing in order to overcome the European rule. Such forces were the Indians, as well as the United Nations. The article is...
2 Pages(500 words)Essay

...Africa’s Capitalist Revolutions Africa has faced a lot of problems since the end of colonialism. Poverty being the greatest problem in Africa it has resulted to the other problems that the continent faces. These problems include, conflict, epidemics, and economic turmoil. However, Africa’s economy has been growing steadily over the years, especially after the end of the cold war. The end of the cold war resulted in a lot of changes in Africa. The reason behind this is because Africa was no longer of interest since fears of whether it would fall into the United States of America’s capitalism or the United Social Soviet Union’s (USSSR)...
2 Pages(500 words)Essay
sponsored ads
Save Your Time for More Important Things
Let us write or edit the essay on your topic "Africa's Road to Independence" with a personal 20% discount.
GRAB THE BEST PAPER

Let us find you another Essay on topic Africa's Road to Independence for FREE!