Comments (0)
Add to wishlistDelete from wishlist
Cite this document
Summary
This research aims to evaluate and present trans-Atlantic slave trade in such regions as the East African Coast and Southern Africa. This essay analyzes the culture and history of East African Coast and South Africa of the 16th and 18th…
Download full paperFile format: .doc, available for editing
HIDE THIS PAPERGRAB THE BEST PAPER93% of users find it useful 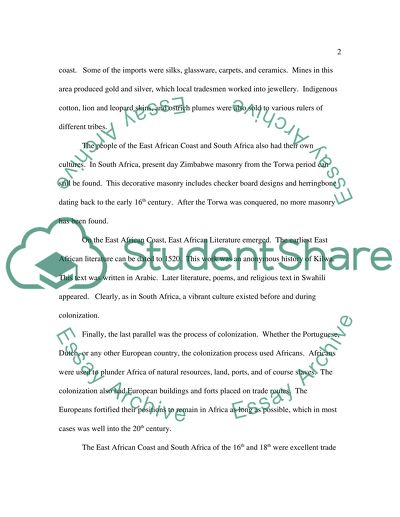 ﻿The East African Coast and Southern Africa
The East African Coast, stretches more than a thousand kilometres from Northern Kenya to Southern Tanzania. A Swahili, African with influences of Arabic and Islamic, people lived on the East African Coast. The Swahili created over a thousand trading settlements stretching from Mogadishu in the North to Mozambique and Madagascar in the South. The Portuguese established two settlements beginning in 1531. Portuguese lasted well into the 20th century.
Southern Africa was also a trade center in the 18th and 16th century. Torwa, Zulas, Maroserana, and other African tribes ruled. The European influence however struck again during this time. Denoon asserts that"the emergence of the strong confederacies, which led ultimately to the formation of the Zulu state, was entirely independent of events at the Cape" (Denoon, 1992:702). Denoon was speaking of the Dutch East India Company creating Cape Town in 1652.
The parallels between what was happening the East African Coast and Southern Africa were numerous. The first was old trade routes created by the Swahilis and South African tribes were being taken over by an outsiders, meaning the European colonists. The trade routes were being used to move all kinds of merchandise. Basically, old trade routes were being used to rape Africa of its precious natural commodities. Instead of coming into Africa and having to build roads, the Africans had already created a system.
One trade route was the Mutapa state, South of the Zambezi River in Mozambique of today. The Mutapa controlled trade routes from inner Southern and Central African coast. Some of the imports were silks, glassware, carpets, and ceramics. Mines in this area produced gold and silver, which local tradesmen worked into jewellery. Indigenous cotton, lion and leopard skins, and ostrich plumes were also sold to various rulers of different tribes.
The people of the East African Coast and South Africa also had their own cultures. In South Africa, present day Zimbabwe masonry from the Torwa period can still be found. This decorative masonry includes checker board designs and herringbone dating back to the early 16th century. After the Torwa was conquered, no more masonry has been found.
On the East African Coast, East African Literature emerged. The earliest East African literature can be dated to 1520. This work was an anonymous history of Kilwa. This text was written in Arabic. Later literature, poems, and religious text in Swahili appeared. Clearly, as in South Africa, a vibrant culture existed before and during colonization.
Finally, the last parallel was the process of colonization. Whether the Portuguese, Dutch, or any other European country, the colonization process used Africans. Africans were used to plunder Africa of natural resources, land, ports, and of course slaves. The colonization also had European buildings and forts placed on trade routes. The Europeans fortified their positions to remain in Africa as long as possible, which in most cases was well into the 20th century.
The East African Coast and South Africa of the 16th and 18th were excellent trade routes and have rich cultures. This made colonialism too tempting for the Dutch and Portuguese in these regions. Both areas were rich territories plundered by European.
References
Denoon, D. Dependence and interdependence: southern Africa, 1500-1800.
Salim, A. I. East Africa, the coast. Read More
Share:
Tags
Cite this document
(“Trans-Atlantic Slave Trade: The East African Coast and Southern Africa Essay”, n.d.)
Retrieved from https://studentshare.org/history/1542617-trans-atlantic-slave-trade

...﻿The Trans-Atlantic Slave Trade 1. The Trans-Atlantic slave trade was one of the largest forced migrations in world history. The slave trade was a long held process from the early 16th century to the mid-19th century during which about 10.5 million Africans were captured from their homes, herded onto ships to the West. On their voyage, the slaves were packed so tightly on board where they could hardly move, and they were sent to entirely strange land. They had to undergo hard times on their way to bondage and even after reaching there. ...
4 Pages(1000 words)Essay

The trans-Atlantic slave trade has normally been considered only regarding the adults. However, now children’s experiences are also being counted. According to an estimate, children made up one-quarter of the African slaves made to migrate to America. In spite of this big number there is indeed a lack of sources and apparently, no importance is given to what the children experienced, leaving their voices unheard. Enslavement Children were very unwilling to participate in the slave trade and in spite of their age they saw themselves captured and in imprisonment after the war. The women, children and the older people became particularly vulnerable after their men were killed during the war; the ones who were spared death were...
6 Pages(1500 words)Research Paper

The Role of Religion in the Trans-Atlantic Slave Trade

...﻿The Role of Religion in the Trans-Atlantic Slave Trade Introduction The transatlantic slave trade was driven by religion especially in the suppression, domestication and control of the African slaves. The European slave traders assisted the African tribal leaders in brutal capture of the slaves who were shipped to their colonies in the Americas where they were forced to work in plantation and industries. The Catholic Church contributed to the development of the trade because it was not opposed to the creation of the new world with the Holy Roman Empire authorizing European involvement in the trade. The justification of the slave traders for their conquest in West and Central Africa was that they needed to convert Africans... into...
8 Pages(2000 words)Essay

...the western hymns in their own local way, as part of the Christian heritage which differentiates the music worship styles in the western and East African societies (King et al. 120). The incorporation of the communities’ dance, clapping, culture of dressing and languages, and other oral features produced a totally different gospel music. The merchants from Asia and Arabia had been trading in the coast regions for jewelry, silk, finery, brass, porcelain, and plates in exchange of ivory, animal skins, and copra from East Africa; a period that involved historical acts of slave trade across the continents...
5 Pages(1250 words)Essay

... Origin and Development of Atlantic Trade Atlantic slave trade refers to the trade which took place between 16th and 19th centuries across the Atlantic Ocean. The trade originated after the establishment of trade contracts between old world and new world continents. Tidal currents have been for centuries limited the trade, but the emergence of new seafaring technologies enhanced traversing of the Atlantic Ocean. According to historian John Thornton, various geographical and technical factors necessitated exploitation of Africans for slaves by Europeans. Such factors acted as drive towards exploitation of profitable commercial opportunities outside Europe and the desire of creating alternative trade network to the one under control... of...
4 Pages(1000 words)Essay

...﻿The Trans-Atlantic Slave Trade The Muslim in North Africa dominated the sub-Saharan trade well into the first half of the 15th Century. The Portuguese did not want to clash with these North African Muslim Arabs, and when they wanted to trade with Africa, they travelled through to the west coast of Africa. As they travelled, they discovered several technologies that enhanced European navigation through Atlantic Ocean. The Portuguese and other groups that came to Africa had the initial intention of...
3 Pages(750 words)Essay

...today, it seems that the Africans are the ones who suffered and gained the least in that trade regime. Works Cited: Bravo, Karen E. "Exploring the Analogy Between Modern Trafficking in Humans and Trans-Atlantic Slave Trade" Boston University International Law Journal. 2008. Vol. 25. No. 207. Pp. 209-295. Nunn, Nathan. "Slavery, Institutional Development, and Long-Run Growth in Africa, 1400-2000" University of British Columbia and the Canadian Institute for Advanced Research. August 2005. Pp. 1-46. "Slavery and Justice" Report of the Brown University Steering Committee on Slavery and Justice. 2007. Pp....
15 Pages(3750 words)Essay

...The Atlantic Slave Trade INTRODUCTION The introduction aims to offer an overview of Atlantic slave trade and present different schools of thought forit; and support one particular view given by an expert on the subject. Common points between the three staple crops and their role in stimulating the need for labor The three great staple crops that slaves produced in the New World were tobacco, coffee, and sugar. The rise in the plantation of these crops induced the need to import labor from Africa. These crops determine the trends of the slave and the master economy. In economy, the...
2 Pages(500 words)Essay

...to the creation of what is now the world’s largest desert. This caused Africans to move further south. And when the Sahara was fully formed, most Africans could not move to North Africa to link up to mainstream activities and technologies. Therefore, they moved in small scattered communities that were in the interior of West Africa and East Africa. Other conditions caused Africans to move further down south to places like the coast of West Africa, Central Africa and Southern Africa. 2. State Formation in Africa before...
10 Pages(2500 words)Assignment
sponsored ads
Save Your Time for More Important Things
Let us write or edit the essay on your topic "Trans-Atlantic Slave Trade: The East African Coast and Southern Africa" with a personal 20% discount.
GRAB THE BEST PAPER

Let us find you another Essay on topic Trans-Atlantic Slave Trade: The East African Coast and Southern Africa for FREE!