The Oppressive Legislature and the Actions of the British - Essay Example

Comments (0)
Add to wishlistDelete from wishlist
Cite this document
Summary
In the report, it is stated that the oppressive legislature and the actions of the British brought the colonies of America together against their common enemy. For the citizen in the states at the time, it was, very likely, an extremely difficult decision to make…
Download full paperFile format: .doc, available for editing
HIDE THIS PAPERGRAB THE BEST PAPER96.1% of users find it useful 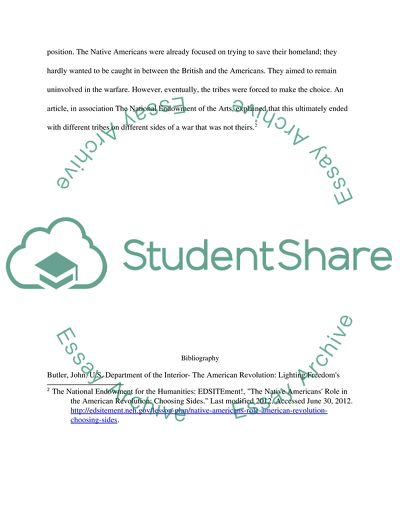 ﻿Choosing Sides
The oppressive legislature and the actions of the British brought the colonies of America together against their common enemy. For the citizen in the states at the time it was, very likely, an extremely difficult decision to make. Many American residents had strong loyalties and gained their status from England, to side against them might cost them that prized status. The wealthy were not the only ones with something to lose. A great number of loyalists were farmers and artisans, as well. But for certain groups the difficult decisions were harder than others.
Many members of the clergy were torn as to which side they should choose. In some parts of the country religion flourished, under the banner that God with the “Patriots” side. John Butler, a writer for the Department of the Interior, discussed that other churches and denominations suffered losses in attendance and, like the Anglicans, had to begin shutting their doors.1 The Quakers were by nature pacifists. They were opposed to any kind of acts of violent warfare. However, they entirely supported the colonists when they boycotted British goods. To the Quakers this was an acceptable form of non-violent, peaceful resistance. Some Quakers were accused of being loyalists but generally they considered themselves to not be a part of the revolution.
Minorities at the time faced difficult challenges, as well. African American slaves found themselves on both sides of the revolutionary war. Many fought on the side of the “Loyalists.” However, the reasons were most likely based on the fact that the British offered to free those slaves that abandoned their “Patriot” masters. Native Americans were, also, caught in a difficult position. The Native Americans were already focused on trying to save their homeland; they hardly wanted to be caught in between the British and the Americans. They aimed to remain
uninvolved in the warfare. However, eventually, the tribes were forced to make the choice. An article, in association The National Endowment of the Arts, explained that this ultimately ended with different tribes on different sides of a war that was not theirs.2
Bibliography
Butler, John. U.S. Department of the Interior- The American Revolution: Lighting Freedom's
Flame, "The Stories of the Revolution-Religion and the American Revolution." Last
modified Dec. 4 2008. Accessed June 30, 2012.
http://www.nps.gov/revwar/about_the_revolution/religion.html.
The National Endowment for the Humanities: EDSITEment!, "The Native Americans' Role in
the American Revolution: Choosing Sides." Last modified 2012. Accessed June 30, 2012.
http://edsitement.neh.gov/lesson-plan/native-americans-role-american-revolution-choosing-sides. Read More
Share:
Tags
Cite this document
(“The Oppressive Legislature and the Actions of the British Essay”, n.d.)
The Oppressive Legislature and the Actions of the British Essay. Retrieved from https://studentshare.org/history/1599486-final-33

“The Oppressive Legislature and the Actions of the British Essay”, n.d. https://studentshare.org/history/1599486-final-33.
Comments (0)
Click to create a comment or rate a document

...?Week 3 Scenario The tort actions I see in this scenario are the tort of battery (an intentional tort), intentional infliction of emotional distress and the tort of negligence. The potential plaintiffs are Malik and Daniel, who are also the potential defendants in this scenario. I mention that both parties are defendants because there was negligence on behalf of Malik and intentional harm on behalf of Daniel. The elements that I found for each of the plaintiffs claims are as follows: If Malik had not accidentially spilled the beer on Ruben (Daniels son), Daniel would not have got fired from his job, being accused of giving alcohol to a minor. Also, if it were not for Malik following Daniel and his son to the parking lot...
2 Pages(500 words)Essay

...their decisions on hiring or firing them. This legislation was developed to ensure that individuals who may be suffering from genetic disorders/diseases are able to get a fair shot at employment as the rest of their compatriots and that their health complications would not come in the way of them getting a job (Tilcsik, 2011). The legislature was passed in 2008 and aims and restoring parity between all employees in the field after realizing that there was a chance that healthy individuals with no genetic problems were being given preference over their colleagues with genetic defects (Tilcsik, 2011). These defects did not necessarily affect the performance of the individual who was afflicted by it and thus such...
3 Pages(750 words)Essay

...? FLORIDA LEGISLATURE BILL TRACKING Florida Legislature Bill Tracking The legislatives could make or break the success of amendments or acts, which entails them to be assisted in their choice of whether voting for a “yes” or a “no” for each bill. Social workers can assist in this process by lobbying for either the approval or rejection of the bill by laying down the pros and cons of either choice (Teater, 2009). This involves bill tracking, creating legislative alert for constituents or direct benefactors of the bill, and providing effective testimonies in front of legislative committees or other entities that have power in its approval or rejection (Flynn, 1992). Tracking a bill and finding out whether it becomes enacted... or not is...
4 Pages(1000 words)Research Paper

...is to take a gap analysis which is the active process to understand how large is the leap to be taken to meet the vision and what should be the action taken. Then priorities would have to be set and resources allocated to developing communication and leadership skills. People at all levels should be involved in the decision making because the ones that interact with the customers are in the best position to suggest methods of improvement. When people from different levels are involved, it could bring about a change in the vision of the company. Each of the teams or divisions should have strategic action plans. Targets would have to be set and if necessary, they may even have to bring in fresh talent into...
4 Pages(1000 words)Essay

...﻿Nevada Legislature Basically, the Nevada Revised Statutes (NRS) state that a physician does not need the consent of a child’s parents or guardians to examine a child, if the doctor has been ordered to examine a child by a law enforcement agency or by a child welfare agency. In order to be clear on the legality of the examination without consent, the physician must make a report to a law enforcement agency or a child welfare agency first, and then be asked to perform the examination. It is not clear that a physician may perform such an examination of his own volition, but once law enforcement is involved, the matter of consent can be put aside in favor of the child’s welfare. Specific statutes that address this...
1 Pages(250 words)Case Study

...Texas Legislature Texas is the second most populated in the United s. The Texas Legislature exercises both authority and responsibility over the people it serves. Alongside legislative powers, the state also enjoys other powers and authority. The legislature also allows for administrative responsibilities, investigative powers and powers of impeachment (Madden 125). Texas has grown and developed at a high speed, attaining an 80% urban margin in the current times. The Texas State Legislature’s responsibility to the public requires that the legislature carries out public education and awareness on crucial issues that arise in its line of duty. Policy...
1 Pages(250 words)Essay

...ACTION Action A action refers to a lawsuit that is filed on behalf of a group of people, as referred to as a who have similar or same legal claims or injuries that are as a result of the same action or product; the defendant, in this case is sued by these persons as a group (Backhaus, Cassone, & Ramello, 2012; Herr, Haydock, & Stempel, 2004). Class actions can also be referred to as ‘multi-district litigation’ or ‘mass tort litigation’. Class actions usually occur in civil cases. A small class or group of plaintiffs-named-or a plaintiff files a lawsuit on behalf of several thousand or a larger group of unnamed plaintiffs who share...
1 Pages(250 words)Essay

...to Part 2 Anti-Oppressive Practice & Challenging Discrimination Oppression refers to a social act of enforcing severe precincts or restrictions on an individual, institution, or group of people. In most cases, such restrictions are placed on the oppressed groups by a political organization or government in power that exploits the groups thereby ensuring that such groups are unable to compete with other groups in society. This action leaves the person or groups or institutions, exploited, devalued and derived of some privileges. Anti –Oppressive Practice(AOP) refers to the method of tackling discrimination by putting more emphasis on the wider problems...
8 Pages(2000 words)Essay

...Action of country: Introduction Before starting a branch of a company or marketing a new product in another country, it is very important to do the cultural analysis of the country in which you want to start the company or market our product. Cultural analysis will provide a brief idea about the country or the market hence providing an overview of what is expected of you by the country or the community and also what you expect from the country. This will help in understanding there means of communication, there dressing style, cultural practices and believes and religion which may be different from those of the country you come from (Gullestrup, 2006). First thing in analysis of the countries cultural practices is understands... as home....
7 Pages(1750 words)Essay

Hutchinsons Strictures upon the Declaration of Congress

...was that the legislatures themselves had allowed the standing troops and that no action could be taken that wasn’t approved by the legislature. Even if Hutchinson’s claim was true, many of the Governors were dependant on the British Crown for their income and would support the British against colonial interests. Hutchinson himself was the Governor of Massachusetts, the heart of the American Revolution, and yet his words clearly highlight who he supported and why. Hutchinson also claims that the Military has every right to interfere with subordinate Civil Power when they supported the Revolution and that the Supreme Civil Powers i.e. the Governors...
17 Pages(4250 words)Research Paper
sponsored ads
Save Your Time for More Important Things
Let us write or edit the essay on your topic "The Oppressive Legislature and the Actions of the British" with a personal 20% discount.
GRAB THE BEST PAPER

Let us find you another Essay on topic The Oppressive Legislature and the Actions of the British for FREE!