Comments (0)
Add to wishlistDelete from wishlist
Cite this document
Summary
Tell how you would have reacted to the attack on Fort Sumter. Include a discussion of the South’s arguments about States’ rights and “The Cause” as understood by Southerners.
On issues such as the sovereignty of…
Download full paperFile format: .doc, available for editing
HIDE THIS PAPERGRAB THE BEST PAPER92.6% of users find it useful 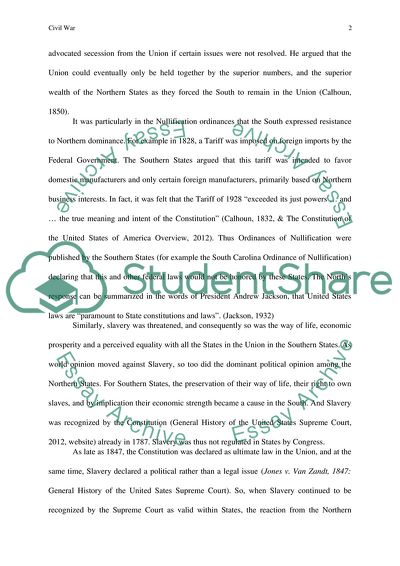 identification (all above optional – if you need them) History and Political Science Topic React to the ment that the Civil War was inevitable. Tell how you would have reacted to the attack on Fort Sumter. Include a discussion of the South’s arguments about States’ rights and “The Cause” as understood by Southerners.
The Essay
On issues such as the sovereignty of States, interpretations of the Constitution and particularly Slavery, the vast differences between North and South are evident, and the Civil War does seem to have been inevitable.
Essential to the causes of the American Civil War is the strong feelings Southern States had regarding their status within the Union. The sovereignty they believed was their right was constantly threatened in the period leading up to the Civil War as the balance of power moved from the Southern States to the Northern. It was felt that these States were being eroded as their ability to self-determine slowly changed. Particularly the Northern States’ greater voting power was questioned by Southern leaders such as John Calhoun, who advocated secession from the Union if certain issues were not resolved. He argued that the Union could eventually only be held together by the superior numbers, and the superior wealth of the Northern States as they forced the South to remain in the Union (Calhoun, 1850).
It was particularly in the Nullification ordinances that the South expressed resistance to Northern dominance. For example in 1828, a Tariff was imposed on foreign imports by the Federal Government. The Southern States argued that this tariff was intended to favor domestic manufacturers and only certain foreign manufacturers, primarily based on Northern business interests. In fact, it was felt that the Tariff of 1928 “exceeded its just powers … and … the true meaning and intent of the Constitution” (Calhoun, 1832, & The Constitution of the United States of America Overview, 2012). Thus Ordinances of Nullification were published by the Southern States (for example the South Carolina Ordinance of Nullification) declaring that this and other federal laws would not be honored by these States. The North’s response can be summarized in the words of President Andrew Jackson, that United States laws are “paramount to State constitutions and laws”. (Jackson, 1932)
Similarly, slavery was threatened, and consequently so was the way of life, economic prosperity and a perceived equality with all the States in the Union in the Southern States. As world opinion moved against Slavery, so too did the dominant political opinion among the Northern States. For Southern States, the preservation of their way of life, their right to own slaves, and by implication their economic strength became a cause in the South. And Slavery was recognized by the Constitution (General History of the United States Supreme Court, 2012, website) already in 1787. Slavery was thus not regulated in States by Congress.
As late as 1847, the Constitution was declared as ultimate law in the Union, and at the same time, Slavery declared a political rather than a legal issue (Jones v. Van Zandt, 1847: General History of the United Sates Supreme Court). So, when Slavery continued to be recognized by the Supreme Court as valid within States, the reaction from the Northern States, and Abolitionists throughout the country was severe enough to ensure that the Civil War would have to be fought to resolve the issue of Slavery. Importantly, the Southern States, in addition to the constitutional issues mentioned, insisted that the Constitution be maintained as it was, in opposition to growing Abolitionist opinion in the North.
Geographically, the tensions between Southern States were also felt as the States with direct access to ports, and hence the revenues streams from exports, could afford to talk of secession, while other states, more landlocked, were hence also more reliant on the growing Northern States and could not readily talk of secession. It was felt, in fact, that “equilibrium between the two sections in the government as it stood when the Constitution was ratified and the government put in action has been destroyed”. (Calhoun, 1850)
Therefore the news of the start of the conflict at Fort Sumter, for a Southerner, may have been welcomed as the beginnings of the protection of the Southern way of life and culture. For a Northerner, it may have seemed that the opportunity had presented itself to unify the United States even further, and get rid of Slavery at the same time.
An observer, however, without vested interest in either side, would consider this the inevitable start of a Civil War, which would threaten the development of the United States of America in the most fundamental way.

CHECK THESE SAMPLES OF Civil War

...Civil War Civil war in America was fought between 1861-1865 following the disputed election of Abraham Lincoln as president. The war was between the Northern State who were opposed to slavery and the Southern States, which did not want to see the end of slavery in their state. The war was fought maily at the Southern States, which also lead to the secession and formation of the Confederate State of America. The call for secession was rejected in totality by the slave States and the president, which in turn lead to the civil war. In the end in 1865, the confederate state surrendered marking the end of...
4 Pages(1000 words)Movie Review

...﻿Civil War Abstract Many scholars have observed that civil war usually present complex situations with which to deal. At the onset of a civil war, the immediate aftermath is usually death and other forms of atrocities. Many civil wars have been caused by the desire to wield power. Civil war exposes people to untold sufferings. Women and children are usually the hardest hit since they are highly vulnerable. Using secondary sources analysis and first hand observation, results indicate that civil wars cause emotional suffering, psychological...
12 Pages(3000 words)Essay

...At What Point Was The Civil War Inevitable? Details: al Affiliation: At What Point Was The Civil War Inevitable? The Civil War; the War for Southern Independence; the War of Secession; the War of Rebellion; the war between the North and the South; even the named seems to be wavering in unanimity. Characterized as “irrepressible,” “criminally stupid,” and/or “unnecessary bloodletting,” the controversy that goes deep to the causes of the war tells as much (Kurtz, 1985, p.130).With deep roots in the prevailing political and economic environment of the time,...
4 Pages(1000 words)Essay

8 Pages(2000 words)Essay
sponsored ads
Save Your Time for More Important Things
Let us write or edit the essay on your topic "Civil War" with a personal 20% discount.
GRAB THE BEST PAPER

Let us find you another Essay on topic Civil War for FREE!