Comments (0)
Add to wishlistDelete from wishlist
Cite this document
Summary
Among some of the targets of the author are high-risk entrepreneurial settings applying high-risk technologies, like petroleum plants,…
Download full paperFile format: .doc, available for editing
HIDE THIS PAPERGRAB THE BEST PAPER95.1% of users find it useful 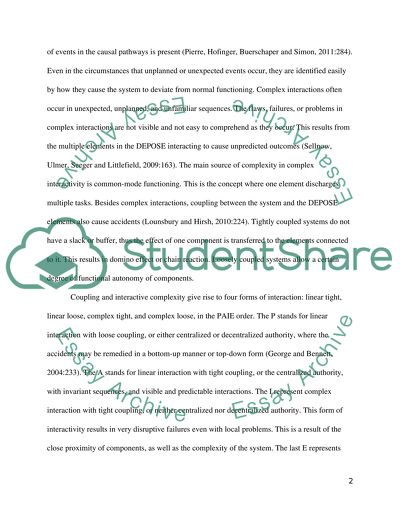 Normal Accidents: Living With High-Risk Technologies The Normal Accident Theory by Charles Perrow focuses on the interaction of human management practices and complex technological systems. Among some of the targets of the author are high-risk entrepreneurial settings applying high-risk technologies, like petroleum plants, hydroelectric dams, nuclear power plants, and the likes. These systems pose a high potential of catastrophes. While differentiating these targets from less risky systems, Perrow creates and uses a generalized typology of systems (Healy, 2011:142). The author further presents arguments a certain class of accidents normal, inevitable, and potentially disastrous in nature exists. Such accidents occur in systems that incorporate many complex interconnections, stringent performance conditions, and many components. Such systems pose a problem of determining and foreseeing failures that might occur (Malloch and O’Grady, 2009:123). Perrow considers a set of considerations named DEPOSE that presents unexpected contingencies and unforeseen complications. These considerations are design limitation, procedural errors, operator errors, procedural errors, equipment failures, and variable in the environment unknown.
Systems prone to normal accidents are identifiable by their complex interaction and components coupling relationship. The interaction of components in a system across the DEPOSE elements may either be complex or linear. In linear interactions, an expected sequence of events in the causal pathways is present (Pierre, Hofinger, Buerschaper and Simon, 2011:284). Even in the circumstances that unplanned or unexpected events occur, they are identified easily by how they cause the system to deviate from normal functioning. Complex interactions often occur in unexpected, unplanned, and unfamiliar sequences. The flaws, failures, or problems in complex interactions are not visible and not easy to comprehend as they occur. This results from the multiple elements in the DEPOSE interacting to cause unpredicted outcomes (Sellnow, Ulmer, Seeger and Littlefield, 2009:163). The main source of complexity in complex interactivity is common-mode functioning. This is the concept where one element discharges multiple tasks. Besides complex interactions, coupling between the system and the DEPOSE elements also cause accidents (Lounsbury and Hirsh, 2010:224). Tightly coupled systems do not have a slack or buffer, thus the effect of one component is transferred to the elements connected to it. This results in domino effect or chain reaction. Loosely coupled systems allow a certain degree of functional autonomy of components.
Coupling and interactive complexity give rise to four forms of interaction: linear tight, linear loose, complex tight, and complex loose, in the PAIE order. The P stands for linear interaction with loose coupling, or either centralized or decentralized authority, where the accidents may be remedied in a bottom-up manner or top-down form (George and Bennett, 2004:233). The A stands for linear interaction with tight coupling, or the centralized authority, with invariant sequences, and visible and predictable interactions. The I represent complex interaction with tight coupling, or neither centralized nor decentralized authority. This form of interactivity results in very disruptive failures even with local problems. This is a result of the close proximity of components, as well as the complexity of the system. The last E represents complex interaction with loose coupling, or decentralized authority (Khosrowpour, 2007:160). This form of interaction requires management of the system by a network of operators with local experience.
Bibliography
George, A, and Bennett, A., 2004. Case Studies and Theory Development in the Social Sciences. Massachussetts: Harvard University Press.
Healy, J., 2011. Improving Health Care Safety and Quality: Reluctant Regulators. Surrey: Ashgate Publishing Limited.
Khosrowpour, M., 2007. Emerging Information Resources Management and Technologies. Hershey, PA: Idea Group Publishing.
Lounsbury, M., and Hirsh, P., 2010. Markets on trial: The Economic Sociology of the U.S Financial Crisis. Bingley, UK: Emerald Group Publishing Limited.
Malloch, K., and O’Grady, T., 2009. The Quantum Leader: Applications for the New World of Work. Sudbury, MA: Jones and Bartlett Publishers.
Pierre, M., Hofinger, G., Buerschaper, C., and Simon, R., 2011. Crisis Management in Acute Care Settings: Human Factors, Team Psychology, and Patient Safety in a High Stakes Environment. Berlin: Springer-Verlag Berlin Heidelberg.
Sellnow, T., Ulmer, R., Seeger, M., and Littlefield, R., 2009. Effective Risk Communication: A Message-Centered Approach. New York: Springer Science. Read More
Share:
Tags
Cite this document
(“SCHOOL OF SOCIAL SCIENCE AND PUBLIC POLICY:(D E P A R T M E N T O F G Essay”, n.d.)
SCHOOL OF SOCIAL SCIENCE AND PUBLIC POLICY:(D E P A R T M E N T O F G Essay. Retrieved from https://studentshare.org/history/1588619-school-of-social-science-and-public-policyd-e-p-a-r-t-m-e-n-t-o-f-g-e-o-g-r-a-p-h-y-risk-management

Number one Key Health Problem(s) in the Case Study

...likings or otherwise. Euro Brand promotion is in line with the globalization trends. Comparable situations and benchmark companies General Electric, Westinghouse and Square D in the electrical industry, and Kimberley-Clark, Scott Paper and Johnson & Johnson in paper-based fast moving consumer products face similar situations as P&G (Porter, 2004, p.322). Conclusion P&G is well-advised to commit itself to launch Vizir product on a pan-European basis for reasons of gaining first mover advantage, taking advantage of its R&D efforts and maintaining frontline status as a leader in global markets. References...
2 Pages(500 words)Essay

The Governance of Globalisation; Is it time for an alternative approach

He characterisationand identificationof your unknown bacteriu: s c i e n t i f i cp a p e

...the gram positive and those that take the color of the counter stain are called gram negative. Here the primary dye is crystal violet and the secondary dye is safranin O or basic fuchsin. 3. Biochemical tests: a. Catalase test: This test is used to identify the micro organisms which produce the enzyme catalase. The catalase enzyme converts the hydrogen peroxide into water and oxygen. If the catalase enzyme is produced by the bacteria, when a drop of hydrogen peroxide is added to the medium, the bubbles are found to have formed indicating the positive reaction. (Brown 2010). b. Oxidase test: The oxidase test is used to differentiate the pseudomonadacease and Enterobacteriaceae families of bacteria based on the...
9 Pages(2250 words)Lab Report

...on a person’s state of health. They can identify the presence of an acute illness, they can quantify the prevalence of a medical problem and its effects. They are also a marker of the status of a chronic disease for example hypertension. A person should regularly go for vital parameter checkups so as watch their health to avoid serious medical problems in future. References Funnel, R., & Koutoukidis, G. (2008). Tabbners Nursing Care: Theory and Practice, 5th edn. Elsevier Australia. Mackowiak, P.A. (2009). Temperature Regulation and Pathogenesis of Fever. Principles and Practice o Infectious Diseases. 7th edn., chap 50. Philadelphia, PA: Elsevier Churchill-Livingstone. Rebeiro,...
4 Pages(1000 words)Research Paper