Comments (0)
Add to wishlistDelete from wishlist
Cite this document
Summary
The author examines "In Life of Constantine" (Book 1) in which Eusebius praises and applauds the man whom he holds in great reverence and earnest, and is apparently in awe of. He sets the scene of the thirtieth anniversary of the death of Constantine.  …
Download full paperFile format: .doc, available for editing
HIDE THIS PAPERGRAB THE BEST PAPER91.7% of users find it useful 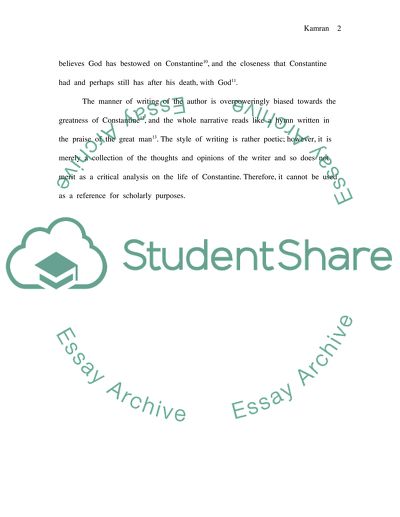 Harris Kamran History Critical Analysis 14 September Eusebius: Life of Constantine (Book In Life of Constantine (Book 1, Eusebius praises and applauds the man whom he holds in great reverence and earnest, and is apparently in awe of2. He sets the scene of the thirtieth anniversary of the death of Constantine3, and states that even to this day, and at his thirtieth anniversary, Constantine continues to rule the masses and impress upon their hearts with his greatness and holiness4, and it is as if he were still alive and reigning5. The author claims that after so many years of his death, the presence of Constantine is, in fact, felt even more strongly than when he was alive6, due to the multitude of followers who have honored the memory of the great man by incorporating the teachings of his life into their lives7, and so now it is as if all these people were his children, and he were still ruling the world through them8. After lying the ground for the anniversary of his death, the Eusebius narrates a little of the history of Constantine, constantly singing his praises, and claiming that no ruler before him had experienced the greatness that Constantine experienced, by ruling so many nations of the world9. An underlying theme of the work is the glory and the blessings that the author believes God has bestowed on Constantine10, and the closeness that Constantine had and perhaps still has after his death, with God11.
The manner of writing of the author is overpoweringly biased towards the greatness of Constantine12, and the whole narrative reads like a hymn written in the praise of the great man13. The style of writing is rather poetic; however, it is merely a collection of the thoughts and opinions of the writer and so does not merit as a critical analysis on the life of Constantine. Therefore, it cannot be used as a reference for scholarly purposes.
Endnotes
1. Kevin Knight, “Life of Constantine (Book I),” New Advent, 2009, http://www.newadvent.org/fathers/25021.htm
2. Ibid.
3. Ibid.
4. Ibid.
5. Ibid.
6. Ibid.
7. Ibid.
8. Ibid.
9. Ibid.
10. Ibid.
11. Ibid.
12. Ibid.
13. Ibid.
Bibliography
Knight, Kevin. “Life of Constantine (Book I).” New Advent. 2009.
http://www.newadvent.org/fathers/25021.htm. Read More
Share:
Tags
Cite this document
(“300 word essay, history of history 8 Essay Example | Topics and Well Written Essays - 250 words”, n.d.)
300 word essay, history of history 8 Essay Example | Topics and Well Written Essays - 250 words. Retrieved from https://studentshare.org/history/1580006-300-word-essay-history-of-history-8

CHECK THESE SAMPLES OF Eusebius: Life of Constantine

Constantine I The Great Emperor

...Empire, it was suggested that a new capital of the empire should be formed. To express the East as a part of the empire, Byzantium was name the capital of the Roman Empire after being renamed to Constantinople. The capital was formed with an aim to make it a center of excellence for the entire empire a place where learning, culture and traditional values would be upheld. Constantinople had important position in the life of Constantine. It was not only the capital of his empire but most of the years of his later life were spent there. He did a lot of work to make Constantinople an exemplary city. The Trajan’s bridge or more commonly known as the Constantine’s bridge...
7 Pages(1750 words)Essay

BYZANTINE History / The Life of Constantine

..., III.VI). Constantine had high respects for church people, like bishops, and provided entertainment for them during the occasion held at Vicennalia (Richardson, III.XV). Conclusion The reign of Constantine as an emperor was a spectacular phenomenon. On the one hand, he focused on maintenance of peace and godly life; on the other hand, he gained control over a huge Roman empire. During his emperorship, he also promoted Christianity and gave all his efforts for maintaining peace of churches. It was believed that he had transformed Roman Empire into a friend of God. Constantine proved to be a true servant of God and gave full credit to God and churches for his victories and...
4 Pages(1000 words)Essay

...to write the History of the Church, which was the initial all-inclusive account of the early Christian history that preserved the wide range of portions of the work otherwise not available today. Eusebius literary works has remained categorized into four groups; the apologetic, the history, the dogmatic, and the Biblical. However, this paper seeks to only review and evaluate the historical document in his writing, his biography and the readings from his book. Eusebius was born in the early fourth century in Palestine Caesarea. The history he wrote about the church records the period from Christ’s birth up to the victory of the Constantine on the Licinius. He covers the duration of the...
4 Pages(1000 words)Book Report/Review

Eusebius and the History of the Church

..., and was translated in numerous languages during the course of history. This paper will focus on the eighth book, which tells about the persecutions of emperors from Diocletian to Maximian, and the tenth book, which is about the reign of Constantine and the tolerance of the Romans to Christians that resulted in the time of peace and tranquility. The eighth book in Eusebius’ Ekklestiastices Historias tells of the rise of the Christian faith, as well as its fall, which he accounts to the events that he himself experienced in his own time.3 Initially, the Roman rulers and officers were very favorable with regards to those of the Christian faith. Aside from letting the lesser of the people worship in accord...
5 Pages(1250 words)Term Paper

Eusebius authorial goals in the Life of Constantine

... the original columns are supposed to have been taken from a building of the Flavian era when the arch was first build (Storage and Maish, 2007). This can be seen as a case of vandalism conducted on a monument which was the result of vandalism conducted on other buildings. Therefore, instead of being a pure reflection of the building arts of the era, elements of the arch often reflect other eras and this adds to the value of the arch as work of art. Around the arch, there are sculptures and figures drawn in relief which show scenes from battles, from the life of Constantine and others through history which have been noted by historians as well as artists. Some of these panels might have come from other buildings and monuments one... Arch of...
4 Pages(1000 words)Essay

Eusebius - History of the First Church

...the triumphant Church with the persecuted previous one. Eusebius also authored the Preparation and Demonstration and such minor works as Martyrs of Palestine and The Life of Constantine. The Topography of Palestine is still considered the most important of works in its department and his views were wide and varied from Pagan to Christian. The Church History is not only valuable because of its many original sources, it possess an invaluable collection of knowledge no longer accessible to us. Subjects contained within The Church History include Abraham, Luke’s genealogy of Christ, Mary, mother of Christ, the pre-existence of Christ and Revelations (Eusebius). The Church...
5 Pages(1250 words)Term Paper

...launched a brilliant attack on Britain and then sailed up the Thames to London destroying the remnants of Allecttus’ army. He began restoring their frontier defenses. His enforcement of Diocletians edicts against Christ was very lax; there was the burning of some churches though no believers were executed. Soon after becoming the Senior Emperor in the West, Constantine realized he was going to die (“Emperor 1 Constantine”). Knowing this and being on his death bed, he requested to be baptized. This last kind act was performed at his bed by Eusebius, Bishop of Nicomedia. When Constantine died on the 22 of May, 337 AD, his body was carried to the Church of the Holy...
5 Pages(1250 words)Term Paper

...Constantine and Christianization Flavius Valerius Constantinus, otherwise known as Constantine the Great (272-337) is generally remembered as a pivotal figure in the transition from Roman to Christian domination of the known world. The stories that have been passed down about the conversion of the emperor Constantine to Christianity rest upon a combination of startling visions of light and the power of God on the one hand, and a personal search for relief from the moral errors and dilemmas that tormented him as a ruler. It is reported that he saw an image of the Christian cross in the sky, and this convinced him of the truth of the Christian religion, and the need to tolerate Christian...
5 Pages(1250 words)Research Paper

... Ashoka, Constantine, and Muhammad In previous world histories, religion and had a substantive link, and whenever a king made a conversion to a new religion, the subject took significant notice of such and often followed their rules to their new religions. In the history, Constantine and Ashoka’s conversions remain the most important and famous considering the impact they had both in religion and the state (Gordon and Baumann 428). In a similar perspective, Muhammad has also had a significant impact on the aspect pertaining to religious conversion. Despite the fact that Ashoka and Constantine possessed large territorial empires, the domains they ruled over never lasted after their deaths even though they tried to recognize... their...
1 Pages(250 words)Assignment
sponsored ads
Save Your Time for More Important Things
Let us write or edit the essay on your topic "Eusebius: Life of Constantine" with a personal 20% discount.
GRAB THE BEST PAPER

Let us find you another Essay on topic Eusebius: Life of Constantine for FREE!