Comments (0)
Add to wishlistDelete from wishlist
Cite this document
Summary
After reviewing the website articles on the suffrage movement, womens liberation, and women in public office, in what ways did the suffrage and womens liberation/feminist movements change the lives of women from 1848 to present day?
The suffrage and women’s…
Download full paperFile format: .doc, available for editing
HIDE THIS PAPERGRAB THE BEST PAPER94.1% of users find it useful 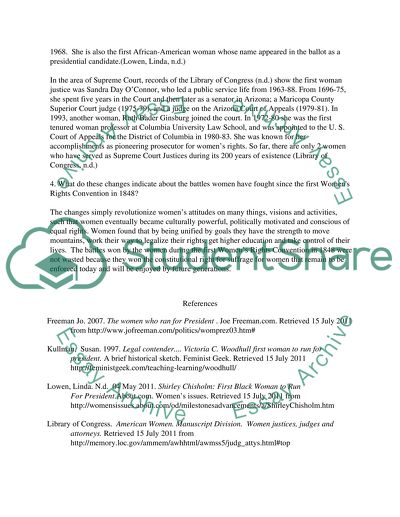 Extract of sample "Polictics and Equality: From Abigail Adams to Hilary Rodham Clinton"

History and Political Science   s submitted Polictics and Equality: From Abigail Adams to Hilary Rodham Clinton
1. After reviewing the website articles on the suffrage movement, womens liberation, and women in public office, in what ways did the suffrage and womens liberation/feminist movements change the lives of women from 1848 to present day?
The suffrage and women’s liberation/feminist movements irrevocably changed the lives of women from 1848 to present day in every field of our endeavor today. Those brave women left us a heritage of women’s rights that have been achieved against great sacrifices in what we can call a peaceful revolution. The transition of women’s ideals put women in equity with males in the matter of economic, political and social status. Women strived to make a difference and to change the deep seated cultural attitudes that set the discrimination against women that denied them equal opportunities for development of their potentials. In a way, ideals and beliefs were slowly changed, and women aspired to be free to choose their own paths in life. From domesticity, women now challenge societal problems and political issues and let their cries be heard in media, in rallies and by the government authorities. Women today are no longer submerged in discrimination but are able to play the defense for equal rights.
2. How did the early years of feminism in the 1960s and early 1970s provide opportunity for women of today?
The feminism in the `1960s and early 1970s laid the groundwork for greater possibilities for education, empowerment, working women, art and feminist theory. These early years characterized the feminists’ goals to have women freedom, equal opportunity and control over their lives. Feminism inspired women to go to college, and to work professionally and to demand for equality in politics, religion, and in other areas and institutions as a balance of gender issues comes into place. Feminists’ movement influenced the way women talk, think and behave and beliefs that their options should be the same with the men. The women’s movement led to the passage of laws that guarantee equality and the right for reproductive freedom. (Napikoski, L. n.d.)
3. One of the changes for women has occurred in terms of women who have run for president of the United States, and those who have served, or are serving, as Supreme Court justices.
According to Joe Freeman (2007) between 1964 to 2004, there were 224 women who ran for president of the United States in the Democratic primaries and 14 were in the Republican primaries. But before these dates the first woman who ran for US presidency was Victoria C. Woodhull in 1872 under the Equal Rights Party (Kullman, 1997). The first African-American woman to seek US presidency in 1972 is Shirley Chisholm after serving the US Congress in 1968. She is also the first African-American woman whose name appeared in the ballot as a presidential candidate.(Lowen, Linda, n.d.)

In the area of Supreme Court, records of the Library of Congress (n.d.) show the first woman justice was Sandra Day O’Connor, who led a public service life from 1963-88. From 1696-75, she spent five years in the Court and then later as a senator in Arizona; a Maricopa County Superior Court judge (1975-79), and a judge on the Arizona Court of Appeals (1979-81). In 1993, another woman, Ruth Bader Ginsburg joined the court. In 1972-80 she was the first tenured woman professor at Columbia University Law School, and was appointed to the U. S. Court of Appeals for the District of Columbia in 1980-83. She was known for her accomplishments as pioneering prosecutor for women’s rights. So far, there are only 2 women who have served as Supreme Court Justices during its 200 years of existence (Library of Congress, n.d.)
4. What do these changes indicate about the battles women have fought since the first Womens Rights Convention in 1848?
The changes simply revolutionize women’s attitudes on many things, visions and activities, such that women eventually became culturally powerful, politically motivated and conscious of equal rights. Women found that by being unified by goals they have the strength to move mountains, work their way to legalize their rights, get higher education and take control of their lives. The battles won by the women during the first Women’s Rights Convention in 1848 were not wasted because they won the constitutional right for suffrage for women that remain to be enforced today and will be enjoyed by future generations.
References
Freeman Jo. 2007. The women who ran for President . Joe Freeman.com. Retrieved 15 July 2011 from http://www.jofreeman.com/politics/womprez03.htm#
Kullman, Susan. 1997. Legal contender.... Victoria C. Woodhull first woman to run for president. A brief historical sketch. Feminist Geek. Retrieved 15 July 2011 http://feministgeek.com/teaching-learning/woodhull/
Lowen, Linda. N.d. 04 May 2011. Shirley Chisholm: First Black Woman to Run For President.About.com. Women’s issues. Retrieved 15 July 2011 from http://womensissues.about.com/od/milestonesadvancements/a/ShirleyChisholm.htm
Library of Congress. American Women. Manuscript Division. Women justices, judges and attorneys. Retrieved 15 July 2011 from http://memory.loc.gov/ammem/awhhtml/awmss5/judg_attys.html#top
Napikoski, Linda. N.d. Goals of the Feminists Movement. About.com. Women’s History. Retrieved 15 July 2011 from http://womenshistory.about.com/od/feminism/a/feminist_movement_goals_in_the_60s_a nd_70s.htm Read More
Share:
Tags
Cite this document
(“Polictics and Equality: From Abigail Adams to Hilary Rodham Clinton Coursework - 1”, n.d.)
Retrieved from https://studentshare.org/history/1578196-polictics-and-equality-from-abigail-adams-to-hilary-rodham-clinton

“Polictics and Equality: From Abigail Adams to Hilary Rodham Clinton Coursework - 1”, n.d. https://studentshare.org/history/1578196-polictics-and-equality-from-abigail-adams-to-hilary-rodham-clinton.
Comments (0)
Click to create a comment or rate a document

CHECK THESE SAMPLES OF Polictics and Equality: From Abigail Adams to Hilary Rodham Clinton

Buddhist traditions in the West

...History and Political Science, Essay March, Remember the Ladies Was Abigail Adams politically correct to use her influence to defend women’s rights? Mrs. Adams was fighting for equality of rights in sexes and I believe Abigail was correct in defending women’ rights because at that time women practically had no rights since their constitutional rights were locked in restrictive cultural norms. Perhaps early religious belief perpetuated the idea that women were created for conception. The papers presented by Women’s International Center, cited early Christian Theologists such as St. Jerome and Thomas Aquinas positioned women under the mantle of male...
5 Pages(1250 words)Essay

...?Whereas it is oftentimes temping to group early American settlers and colonists into convenient labels and stereotypes, the fact of the matter is that the differential between the early colonials and settlers was much greater than one might at first expect. As a function of comparing and contrasting the differential between prominent individuals within the early history of the United States, the following analysis will focus upon the lives and relationships that were shared between Abigail and John Adams as compared to the relationship that was shared between Margaret and John Winthrop. From the analysis that will be performed, it will be plainly obvious to the reader that even though these couples were relatively closely related... , in...
4 Pages(1000 words)Essay

..., that Clinton met Hillary Rodham, a bright young woman whose political objectives were in harmony with those of Clinton (Finkelman and Wallenstein 80). The Clintons moved to Arkansas after their graduation, where Bill took up a teaching position at the University of Arkansas but since his heart was in politics, he right away entered the world of politics. His first shot at an elective seat after graduating from Yale was in 1974 when he faced the Republican incumbent U.S. House of Representatives John Paul Hammer Schmidt in an election Clinton lost. Clinton lost the election in by a small margin to the surprise of many marking his stature...
5 Pages(1250 words)Essay

...Naghmeh (Melody) Haghighi Matt Manson English 340 March 2006 Patch Adams Being a good physician is both a science and an art. Thismeans that a good physician learns not only how to take care of their patients with the skills necessary to treat their physical illnesses, but also how to respect and treat each of them as human beings. All individuals have the right to respect, and they do not lose the right to expect or receive it when they become patients in a clinic or hospital. Unfortunately, some physicians are less concerned about their patients than they are about their paychecks, or they simply don't recognize that patients may have other needs besides physical ones, which may need to be taken care of in order to...
4 Pages(1000 words)Essay

It Takes a Village by Hillary Rodham Clinton

...﻿It Takes a Village by Hillary Rodham Clinton No man is an island. This seems to be the concept underlying the book It Takes a Village and Other Lessons Children Teach Us written by Hillary Rodham Clinton. The title came from the African proverb which states that “It takes a village to raise a child.” According to Kerby Anderson (1996) the proverb represents a new paradigm of feminist and socialist thinking. Clinton wrote the book to emphasize the importance of educating the children through the cooperation of the village (Stark 2006). During one of her 1999 public speech, Clinton said “community support is the key to valuing families”...
5 Pages(1250 words)Book Report/Review

...A Symbolic Look at Hillary Rodham Clinton Often times during the of her husband's Presidency, Mrs. Clinton was revered as a powerful, driving force for her husband, his ideals, and the future of the country. Some feared her as being too powerful, while others tended to feel that she was not powerful enough. Strong willed and educated with a law degree from Yale University, Mrs. Clinton through education and personal action that the role of First Lady in thinking of those past such as Lady Bird Johnson or Mrs. Eisenhower, had changed and would continue to change for the foreseeable future. There are some who fear strong woman, while there are also those who revere them. The question is should someone like Hillary Rodham Clinton... be...
3 Pages(750 words)Essay

Adams vs. Jefferson and Liberty, Equality and Power

...of the of the Comparative book reviews of Adams vs. Jefferson and Liberty, Equality and Power Adams vs. Jefferson: The focus of ferling's Adams vs. Jefferson lies not only on the events and political scheming encircling the fiercely contested presidential election of 1800 but it also is an outstanding learning of the political scenario, throughout the early national period. A large section of the book portrays the Election of 1800 as the culmination of a political movement which witnesses the obliteration of the Revolutionary consensus, increase in activity of prepared ideologically guided parties. Ferling engages the reader through his detailed and appealing narrative,...
2 Pages(500 words)Essay

...﻿ Hilary Clinton and Clara Barton Student Name Instructor Name Date Hilary Clinton and Clara Barton Introduction Throughout history, women have contributed so much in different fields – such as education, nursing, children’s welfare, administration or the government. Their contributions were given recognition by both the public and the private organizations. For instance, Florence of Nightingale dedicated her life helping the injured soldiers and civilians during wartime. Her nursing efforts earned her the credit as the founder of the nursing profession. There are also women in the government sector who had accomplished much in their specific jobs. There are those who were active in the feminist movements and fought... for the...
8 Pages(2000 words)Research Paper

2 Pages(500 words)Essay
sponsored ads
Save Your Time for More Important Things
Let us write or edit the coursework on your topic "Polictics and Equality: From Abigail Adams to Hilary Rodham Clinton" with a personal 20% discount.
GRAB THE BEST PAPER

Let us find you another Coursework on topic Polictics and Equality: From Abigail Adams to Hilary Rodham Clinton for FREE!