Modernism and Modernization between Japan and Korea - Essay Example

Comments (0)
Add to wishlistDelete from wishlist
Cite this document
Summary
Modernism and modernization involves an in-depth analysis on various aspects of three countries with a lucid presentation on song china, Josean Korea and Meiji Japan. At the outset this treatise has dwelt on certain parameters that embrace the country of Korea especially Josean Korea in a few words. …
Download full paperFile format: .doc, available for editing
HIDE THIS PAPERGRAB THE BEST PAPER97.6% of users find it useful 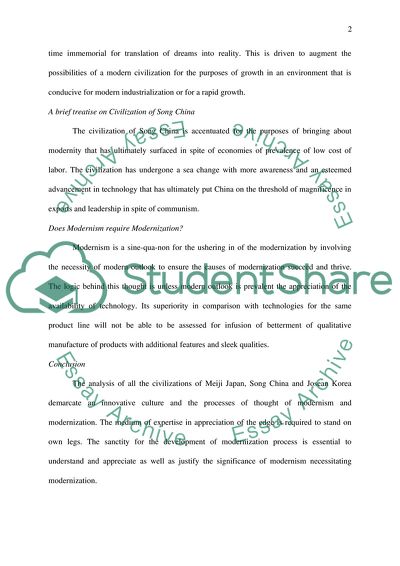 Extract of sample "Modernism and Modernization between Japan and Korea"

﻿East Asian Japan Civilization Fall 2010
Introduction
Modernism and modernization involves an in-depth analysis on various aspects of three countries with a lucid presentation on song china, Josean Korea and Meiji Japan. At the outset this treatise has dwelt on certain parameters that embrace the country of Korea especially Josean Korea in a few words. An attempt has been made to analyze and magnify the quintessence of the comparison in the process between modernism as well as modernization.
Comparison between modernism and modernization of Josean Korea
The present day Korea is completely modernized with the advent of technology and the presence of Korean Chaebols that have the inbuilt leadership to command a major chunk of the market share as well as resources that spontaneously create an expertise and market edge to represent in global markets. Modernism means the presence of the latent modernity that involves a group of minds in a society that concentrates on modern thinking with continuous spree of modern thoughts that creates an outlook with absolute innovative and new methodologies. From this angle the economy of Korea has performed well and has been successfully withstanding the vicissitudes of uncertainties in going through the hub of the trade cycle. There has been a modern outlook in thoughts that have converged in a manner that is conducive for a rapid modernization as well as industrialization. Hence, the country witnesses strong and sound corporate known as chaebols that bring about enormous contribution to the national exchequer. (Brown, Ju, and John Brown, 2006).
Comparison of Modernism and Modernization of Meiji Japan with Korea
The qualities of modernism and modernization of Meiji Japan would involve a qualitative approach of the transition that transforms the biblical thoughts developed over time immemorial for translation of dreams into reality. This is driven to augment the possibilities of a modern civilization for the purposes of growth in an environment that is conducive for modern industrialization or for a rapid growth.
A brief treatise on Civilization of Song China
The civilization of Song China is accentuated for the purposes of bringing about modernity that has ultimately surfaced in spite of economies of prevalence of low cost of labor. The civilization has undergone a sea change with more awareness and an esteemed advancement in technology that has ultimately put China on the threshold of magnificence in exports and leadership in spite of communism.
Does Modernism require Modernization?
Modernism is a sine-qua-non for the ushering in of the modernization by involving the necessity of modern outlook to ensure the causes of modernization succeed and thrive. The logic behind this thought is unless modern outlook is prevalent the appreciation of the availability of technology. Its superiority in comparison with technologies for the same product line will not be able to be assessed for infusion of betterment of qualitative manufacture of products with additional features and sleek qualities.
Conclusion
The analysis of all the civilizations of Meiji Japan, Song China and Josean Korea demarcate an innovative culture and the processes of thought of modernism and modernization. The medium of expertise in appreciation of the edge is required to stand on own legs. The sanctity for the development of modernization process is essential to understand and appreciate as well as justify the significance of modernism necessitating modernization.
Work Cited
Brown, Ju, and John Brown. China, Japan, Korea Culture and Customs. South Karolina: BookSurge LLC, 2006. Read More
Share:
Tags
Cite this document
(“Modernism and Modernization between Japan and Korea Essay”, n.d.)
Retrieved from https://studentshare.org/history/1574726-modernism-and-modernization-between-japan-and-korea

(Modernism and Modernization Between Japan and Korea Essay)
https://studentshare.org/history/1574726-modernism-and-modernization-between-japan-and-korea.

“Modernism and Modernization Between Japan and Korea Essay”, n.d. https://studentshare.org/history/1574726-modernism-and-modernization-between-japan-and-korea.
Comments (0)
Click to create a comment or rate a document

CHECK THESE SAMPLES OF Modernism and Modernization between Japan and Korea

...? Japan-Korea Trade Relations Japan and Korea are among the most important economies in the East Asia. Any impact on these economies would affect the rest of the economies in the region; therefore it is highly important that both the economies remain stable. In the recent past, it has been observed that without any cooperation, these economies would not be able to handle the economic crisis in the Asia. The Asian economic crisis caused both these countries to promote a closer economic relationship. This time, it was determined that mere private sector cooperation would not suffice, but the economies will have to cooperate at governmental level. Thus, it can be inferred...
8 Pages(2000 words)Term Paper

...JAPAN; MODERNISATION VS TRADITION The film 'The Last Samurai' was outstanding for many reasons - not the least being its depiction of Japanese society in the days of the great Samurai tribe and the dignity and quietness. This dignity and quietness yet a controlled energy has been compared to Mount Fuji 'passion within m calm outside' and is reflected in Japanese literature and the most eloquent ambassadors of Japanese culture ; its films and paintings. These seem to depict a serene world view seemingly unaffected by any attempt to be modern. Though Japan and its culture remain an enigma - you could look at a Japanese painting, be struck with it and, going home1, would be suddenly struck...
3 Pages(750 words)Essay

Christianity between South Korea and Japan

...population is Christian and that South Korea has witnessed the most spectacular historical and sociologically significant expansion in Christianity particularly over the past three decades, the period of the countrys remarkable modernization. Christians constitute approximately 25 percent of South Korea’s total population. Many observers agree that the dynamism of Korean Christianity is an outgrowth of the peninsulas unique history as well as the early role of indigenous leadership. Being a colony of Japan From 1910-1945 rather than of a Christian European nation, Koreans associated Christianity with anti-Japanese nationalism. Japan also viewed the...
8 Pages(2000 words)Essay

Gender Bias in Korea and Japan

...Gender Bias in Korea and Japan Koreans and Japanese are considered to have similar beliefs in almost all aspects of life, from culture and tradition to organization within their society. Gender inequality has been a persistent problem in both the nations since their establishment. The social problem has been catalyzed by their almost similar beliefs in culture and traditions, which supports male chauvinism and dominance. The traditional woman in the Korean society is considered one that takes care of her family at home. The husband is the head of the house and is expected to fend for the family. These views are similar to those in the traditional Japan culture. To analyze the gender bias...
6 Pages(1500 words)Essay

Buddhism in China, Korea and Japan

...Buddhism in China, Korea and Japan The Parable of the Burning House’s central theme is that man bears the lot of birth, worry, misery, sickness, oldage, and death, but is simply not aware of all this. Human beings can only come out of the fire that symbolizes misery by following Buddha. The parable is about a father whose three young sons are inside a house on fire. The sons are too indulged in playing with each other to notice the danger posed by the fire. Rather than drawing their attention toward the fear and inculcating fear in them, the father lures his sons out by promising to each of them that if they come out, they would get the sort of cart desired by each of them individually. The father gives...
1 Pages(250 words)Assignment

Buddhism in china, Korea and japan

...Buddhism in China, Korea and Japan Buddhist texts are rich in philosophy and spiritual reasoning. The ‘Lotus Sutra’ is an important script for the East Asian Buddhists, in countries that include China, Japan, and Korea. While admiring this Sutra, the Zen tradition of prayer and meditation has carried the legacy of ‘Lotus Sutra’ in its Koan practice. The muddy pond for the lotus, mentioned in this particular text can be compared to present day chaotic areas like New York’s Manhattan or Canada’s Toronto. The Parable of the Burning House The third chapter of this Sutra reflects upon the ‘Parable of Burning House’, as Buddha is hesitant to teach the Lotus Sutra to his...
1 Pages(250 words)Assignment

...China, Japan and Korea Problems influencing Governments China and Japan have a global recognition as some of the rapidly developing states in the Asian continent. Although currently the two nations are in good relations, this was not the case in the past. Historically, these states experienced both internal and external conflicts. The most common form of conflicts between China and Japan were political. Studies showed that the main reason for the political issues was that these states had no formal institutions that connected its citizens to the political system. In china for instance, it embraced a traditional form of governance, commonly known as Qing...
4 Pages(1000 words)Essay

... Teacher How does Gregors family behave at the end of the story? What are your reactions to the events and atmosphere at the end? Gregor’s character in Kafka’s metamorphosis suddenly turned to an insect when he woke up. It was not only his appearance that changed but also his voice. His parents were initially surprised but quickly accepted his transformation when Gregor’s father drove him back to his room when he ran after his manager as an insect. His mother and sister fed him and moved furniture in their house so that he can freely move. The story showed that no matter what will happen to us, our family will accept us no matter what even if we become and insect just like George. In the end, George’s sister had been feeding... Teacher...
1 Pages(250 words)Essay

...Modernism affiliation Modernism Modernism is an analytical movement that ascended from far-reaching and wide-scale alterations in western society in conjunction with cultural changes and trends in the early twentieth and late nineteenth centuries. Among the issues that molded modernism were the advancements of present industrial civilizations and the swift development of cities, trailed then by the fear of World War 1. Ayers, (2008), states that modernism also rebuked the inevitability of insight thinking, and various modernists rebuked religious belief. In general, modernism comprises of the creations and activities of those who felt the...
2 Pages(500 words)Essay
sponsored ads
Save Your Time for More Important Things
Let us write or edit the essay on your topic "Modernism and Modernization between Japan and Korea" with a personal 20% discount.
GRAB THE BEST PAPER

Let us find you another Essay on topic Modernism and Modernization between Japan and Korea for FREE!