Comments (0)
Add to wishlistDelete from wishlist
Cite this document
Summary
The present essay "Blood Pressure Measurement" is focused on the data received by means of the Levene’s Test. As the author puts it, since Levene’s Test value is higher than 0.05 we have to select the p-value for “Equal variances assumed”…
Download full paperFile format: .doc, available for editing
HIDE THIS PAPERGRAB THE BEST PAPER91.1% of users find it useful 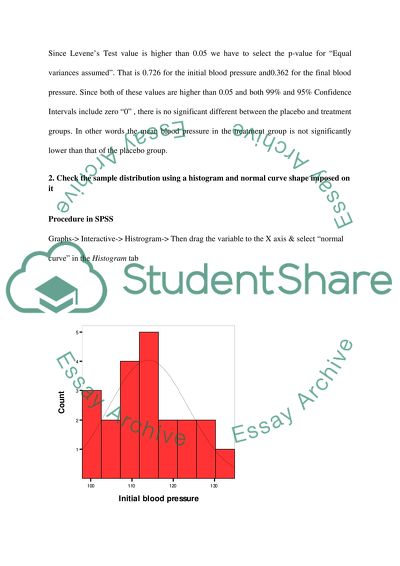 ﻿1. Carry out a t test of two independent sample means for two groups (placebo/control and treatment/calcium) using the blood dataset
Process in SPSS
Analyse-> Compare means-> Independent sample T Test
95% confidence interval
99% confidence interval
Since Levene’s Test value is higher than 0.05 we have to select the p-value for “Equal variances assumed”. That is 0.726 for the initial blood pressure and0.362 for the final blood pressure. Since both of these values are higher than 0.05 and both 99% and 95% Confidence Intervals include zero “0” , there is no significant different between the placebo and treatment groups. In other words the mean blood pressure in the treatment group is not significantly lower than that of the placebo group.
2. Check the sample distribution using a histogram and normal curve shape imposed on it
Procedure in SPSS
Graphs-> Interactive-> Histrogram-> Then drag the variable to the X axis & select “normal curve” in the Histogram tab
3. Carry out tests of skewness of the distribution.
Procedure in SPSS
Analyze-> Nonparametric tests-> One sample K-S
One-Sample Kolmogorov-Smirnov Test

Negative
-.090
Kolmogorov-Smirnov Z
.924
Asymp. Sig. (2-tailed)
.361
a Test distribution is Normal.
b Calculated from data.
4. Provide short definitions of the following terms:
Standard deviation: standard deviation is a measure of dispersion of a population or a data set from the observed mean. Low value indicates data has very close value to the mean while large values indicate highly deviated or spread data. In this test Standard deviations of initial blood pressure were 9.02 and 10.62 in placebo and calcium groups respectively.
Variance: is a measure of average statistical dispersion. Like standard deviation it also gives an idea about the distance of its possible values from the expected value of the mean. Whereas the mean is a way to describe the location of a distribution, the variance is a way to capture its scale or degree of being spread out.
Hypothesis test: hypothesis test is a statistical method of identifying difference between two populations or samples. This helps to find out these populations are different or equal. Here independent sample T Test was performed as the hypothesis test.
Level of significance: the significance level of a test is a probability of null hypothesis to be true. As an example in above test level of significance for final blood pressure between placebo and treatment groups is 0.36. This means null hypothesis (i.e. treatment has no effect) has 0.36 or 36% probability to exit. Usual cutoff for significance level is 0.05 or 5% and null hypothesis is rejected if the Level of significance is below 0.05.
Standard error of the sample mean : is the standard deviation of the error in the sample mean relative to the actual mean. In this comparison standard error of the initial blood pressure in the placebo group is 2.721.
References
Dodge, Yadolah (ed) 2003, The Oxford Dictionary of Statistical Terms, Oxford University Press Inc, NewYork. Read More
Share:
Tags
Cite this document
(“Blood Pressure Measurement Essay Example | Topics and Well Written Essays - 1000 words”, n.d.)
Retrieved from https://studentshare.org/health-sciences-medicine/1554974-carry-out-a-t-test-of-two-independent-sample-means-for-two-groups-placebocontrol-and-treatmentcalcium-using-the-blood-dataset-use-spss-compare-means-independent-samples-t-test-command-use-treatment-as-the-grouping-variable

...?Blood pressure is a measure of tension exerted by blood against the walls of the arteries. It de s the force of ventricular contraction, the resistance within the arterioles and the capillaries and the volume and viscosity of blood. Accurate measurement of blood pressure in the presence of findings in the history and physical examination of a patient can bring to light a diagnosis that may pertain to any of the above factors. This is why measurement of blood pressure is an integral part of general as well as cardiovascular examination. There are several...
2 Pages(500 words)Essay

How to Take a Blood Pressure

...? How to Take a Blood Pressure? (College) This study is an effort to introduce a new method to help individuals learn the theory and practice of taking blood pressure. Firstly, the study looks into various scholarly works on the subject to identify various ways adopted in the present medical curriculum to teach blood pressure measurement. In addition, it looks into the efficiencies and deficiencies of the present ways of teaching. Thereafter, the usefulness of computer simulation and video are also studied in depth. Finally, a new computer program is developed that will enable individuals to learn everything about taking...
5 Pages(1250 words)Coursework

...? High Blood Pressure Measurement Introduction Blood pressure measurement is among the most important and commonly performed office tests; however, man people tend to undervalue the importance of the test. As a matter of fact, the according to Geddes and Newberg (1992) nearly 45% of adults tend to have high blood pressure without their knowledge. I opted to conduct this experiment in order to ascertain how blood pressure level tends to fluctuate under various body conditions. Moreover, unlike other experiments that require complex procedures and equipments that can only...
4 Pages(1000 words)Essay

...of heart diseases and many diet conscious people have complied with this (Park, 2012). One will be forced to think again, according to the Archives of the International Medicine, the proponent of the idea are taken to have missed a point. The body conducted a research to prove the point but of the 20, 500 patients that were chosen at random and administered omega-3 and placebo developed heart diseases in equal measure (Park, 2012). This new advancement throws into jeopardy the first assertion. They concluded that there must have been biasness in the first research and the role of omega-3 in treating heart disease is still at large. Work Cited Krueger, Pat. "What Is a Relationship Between Weight & Blood...
1 Pages(250 words)Assignment

...Insert Introduction During the laboratory activity, systolic blood pressure (the maximum pressure exerted by the blood against the artery walls) of the test subject was 110 at rest. However, this pressure increased to 120 and 140 when subject was placed under 1kg and 2.5 kg workloads respectively. This was the case as blood flow has to increase during strenuous activity (exercise) in order to supply nourishment (oxygen and nutrients) to critical organs such as the heart, brain, lungs and muscles. At the same time, diastolic pressure (the lowest pressure in the artery) at rest was measured...
1 Pages(250 words)Essay

...cardiac output and hence reduces blood pressure initially. This is also called orthostatic hypotension (reduced blood supply to brain due to reduced cardiac output causing fainting). However after sometimes, baroreceptor respond to this decreased blood volume and stimulates the cardio-accelerator center in Rostral Ventrolateral Medulla which cause noradrenergic discharge. Nor adrenaline then acts on Beta-2 adrenergic receptors on myocardium to increase the heart rate and force of contraction to increase the blood pressure to normal and thus maintaining homeostasis (Williams et al, 2004). Q2. Analyzing the blood...
6 Pages(1500 words)Lab Report

The measurement of arterial and blood pressure

...﻿The measurement of arterial and blood pressure Section B B1 i) According to the JNC 7 Report the BP reading of subject N which is reported to be 125/78 is classified as prehypertension stage since it is greater than the prescribed systole limit of ≤ 120. Subject K on the other hand will be classified as a patient of hypertension stage – I which has a systolic range of 140-159 and a diastolic range of 90-99. The reading of subject K reported to be 150/90 comes under this category. ii) Mean arterial pressure (MAP) can be estimated through the following formula MAP ≈ DP + 1/3 (SP – DP) Accordingly subject N has a MAP of 93.67 mmHg while subject K has a MAP of 110 mmHg...
4 Pages(1000 words)Lab Report
sponsored ads
Save Your Time for More Important Things
Let us write or edit the essay on your topic "Blood Pressure Measurement" with a personal 20% discount.
GRAB THE BEST PAPER

Let us find you another Essay on topic Blood Pressure Measurement for FREE!