Comments (0)
Add to wishlistDelete from wishlist
Cite this document
Summary
No one person and no one profession can meet all the needs of the client with cancer and the family. To effectively manage outcomes requires teamwork involving the client, the family, the nurse, and other health professionals. (Meier, 2001)
The author of this paper works as a nurse in an Oncology Unit…
Download full paperFile format: .doc, available for editing
HIDE THIS PAPERGRAB THE BEST PAPER96.6% of users find it useful 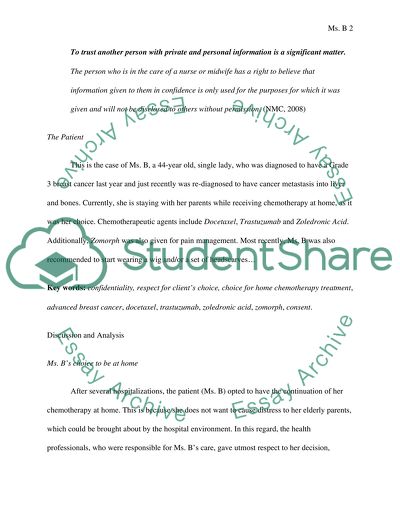 Extract of sample "Care for a Patient undergoing Chemotherapy"

Download file to see previous pages Furthermore, this paper aims to provide a critical analysis of all aspects of care, including the medical management and the nursing interventions that are purposefully rendered to the patient. Hence, the bases for the discussion and analysis in due course of this paper were gathered from relevant literatures and reputable references, thereby exemplifying its intent.
Important Note: The data presented therein are with strict and utmost confidentiality to protect the client's rights. In this regard, the identity and other markers of the client and the hospital are intentionally obscured to ensure observance of confidentiality. As such, the Nursing and Midwifery Council (NMC, 2002) stated that, as nurses (and midwifes), we must protect the confidentiality of all information pertaining to the patients and all aspects of their care, thereby warranting us to guard against any breaches of confidentiality. Furthermore, the so-called "Confidentiality Advise Sheet", which was updated by NMC (2008), explicated the following valuable reminder, which is quoted below:
To trust another person with private and personal information is a significant matter. The person who is in the care of a nurse or midwife has a right to believe that information given to them in confidence is only used for the purposes for which it was given and will not be disclosed to others without permission. (NMC, 2008)
This is the case of Ms. ...
Currently, she is staying with her parents while receiving chemotherapy at home, as it was her choice. Chemotherapeutic agents include Docetaxel, Trastuzumab and Zoledronic Acid. Additionally, Zomorph was also given for pain management. Most recently, Ms. B was also recommended to start wearing a wig and/or a set of headscarves
Key words: confidentiality, respect for client's choice, choice for home chemotherapy treatment, advanced breast cancer, docetaxel, trastuzumab, zoledronic acid, zomorph, consent.
Discussion and Analysis
Ms. B's choice to be at home
After several hospitalizations, the patient (Ms. B) opted to have the continuation of her chemotherapy at home. This is because she does not want to cause distress to her elderly parents, which could be brought about by the hospital environment. In this regard, the health professionals, who were responsible for Ms. B's care, gave utmost respect to her decision, thereby freely giving the client to decide for herself as a sane and rational individual. Moreover, though the client is in the advanced stage of breast cancer, she is still deemed as capable of making decisions for her treatment. We can correlate this concept to the Mental Capacity Act 2005 (Department of Health [DH], 2007), where the following significant idea is stated:
A presumption of capacity - every adult has the right to make his or her own decisions and must be assumed to have capacity to do so unless it is proved otherwise (DH, 2007)
In addition, the Mental Capacity Act 2005 "makes it clear as to who can take decisions in which situations and how they should go about it It enables people to plan ahead for a time when they may lack capacity" (DH, 2007). In this manner, the client, though having some depression but undergoing weekly psychiatric ...Download file to see next pagesRead More
Share:
Tags
Cite this document
(“Care for a Patient undergoing Chemotherapy Case Study”, n.d.)
Care for a Patient undergoing Chemotherapy Case Study. Retrieved from https://studentshare.org/health-sciences-medicine/1510137-care-for-a-patient-undergoing-chemotherapy

“Care for a Patient Undergoing Chemotherapy Case Study”, n.d. https://studentshare.org/health-sciences-medicine/1510137-care-for-a-patient-undergoing-chemotherapy.
Comments (0)
Click to create a comment or rate a document

CHECK THESE SAMPLES OF Care for a Patient undergoing Chemotherapy

This is also the position Stone (2007) takes in the quote under discussion.
Furthermore, Stone goes on to declare that Australia has been very slow to implement this practice as compared with other countries and government agencies. One of the primary reasons is that the public policy system in Australia is quite complex and the decision-makers have not come into agreement on where to place it in the policy matrix. This leaves Interprofessional Practice and Education in the dark (or the cold) as far as strategic planning for implementation as well as placing itself within the funding cycles of the government disbursements. (Stone, 2007)
Policies are created in order to put in place how politicians and government official...
6 Pages(1500 words)Assignment
sponsored ads
Save Your Time for More Important Things
Let us write or edit the case study on your topic "Care for a Patient undergoing Chemotherapy" with a personal 20% discount.
GRAB THE BEST PAPER

Let us find you another Case Study on topic Care for a Patient undergoing Chemotherapy for FREE!