Comments (0)
Add to wishlistDelete from wishlist
Cite this document
Summary
Organic food: is it really worth-buying?
We are what we eat. The supporters of healthy way of life and those people, who just want to live better and be healthier, know the phrase “organic food” pretty well…
Download full paperFile format: .doc, available for editing
HIDE THIS PAPERGRAB THE BEST PAPER98.1% of users find it useful 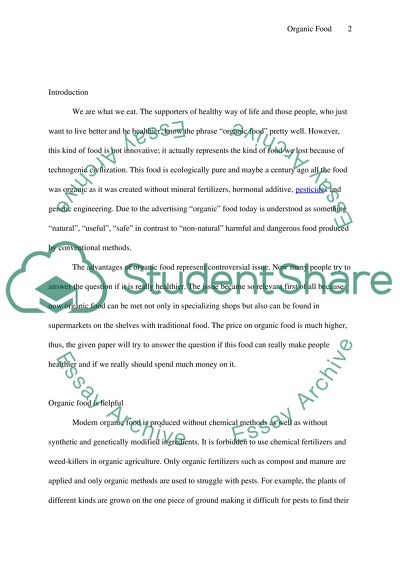 Extract of sample "Organic food: is it really worth-buying"

Download file to see previous pages Due to the advertising “organic” food today is understood as something “natural”, “useful”, “safe” in contrast to “non-natural” harmful and dangerous food produced by conventional methods. The advantages of organic food represent controversial issue.
Now many people try to answer the question if it is really healthier. The issue became so relevant first of all because now organic food can be met not only in specializing shops but also can be found in supermarkets on the shelves with traditional food. The price on organic food is much higher, thus, the given paper will try to answer the question if this food can really make people healthier and if we really should spend much money on it. Organic food is helpful Modern organic food is produced without chemical methods as well as without synthetic and genetically modified ingredients. It is forbidden to use chemical fertilizers and weed-killers in organic agriculture. Only organic fertilizers such as compost and manure are applied and only organic methods are used to struggle with pests. For example, the plants of different kinds are grown on the one piece of ground making it difficult for pests to find their favorite “dish”. The natural fertility of soil as well as the immunity of plants is saved, thus plants are able to resist pests naturally. Organically pure vegetables and fruits usually do not have attractive look, but they are tastier and more nutritious than those produced traditionally. They contain more vitamins, minerals, nutritious and biologically active substances. Certainly, due to the efforts spent on cultivation and small productivity, ecologically pure food is much more expensive than conventional, the price for it in the supermarkets is usually too times higher. For many countries the high price is connected with transportation if the most part of the food is brought from other states. Thus, the question arises if we really should pay a big money for the pleasure to eat a “pure” food, if we live, for example, in polluted megalopolis or factory city (Canavari, 2007). The majority of important nutritious substances humans get from food, vegetative and animal. Food structure is determined by the conditions, which it was produced in. If potatoes was grown with the use of chemical fertilizers and chicken we eat was produced with the help of special hormones for fast grow, this food can only damage human’s organism (Hond, 2003). In order to extend the term of storing, to improve the look and to increase the income food producers started and keep using more and more strong chemicals for growth stimulation, antibiotics for long storage and genetic engineering for producing food in unnatural conditions. However, non-official medical investigations in some European countries showed that with the beginning of intensive use of chemicals the cases of such diseases as cancer, diabetes, arthritis etc. increased. Really, applied chemicals and other substances, which human organism gets with food, destroy its immunity. And what results can we receive if to add to harmful effect of chemicals the influence of polluted air and sedentary life? If we can’t influence our ecological conditions effectively, it is still possible for us not to consume harmful food and make a right choice. This is the answer to the question if we should spend money for organic food. More and more people vote for ecologically pure ...Download file to see next pagesRead More
Share:
Tags
Cite this document
(“Organic food: is it really worth-buying Essay Example | Topics and Well Written Essays - 1250 words”, n.d.)
Retrieved from https://studentshare.org/health-sciences-medicine/1471589-organic-food-is-it-really-worth-buying

CHECK THESE SAMPLES OF Organic food: is it really worth-buying

Food Advertising and Its Impact on Young Minds

Issue of fairness: I believe like most parents and consumer protection groups that advertising directly to children is dangerous and unethical as it can be deceptive and manipulative. It also promotes consumerism and poor nutritional habits to a defenseless target audience.
To create awareness and promote stricter Regulations: In the UK, as compared to many other European nations, there are currently few policies or standards for food advertising and marketing aimed at children. For example, The Nordic countries are at the forefront of protecting children from the effects of advertising. Sweden has the strictest controls in Europe and in 1991 instituted a ban on television and radio advertising targeted at children under the...
18 Pages(4500 words)Research Proposal

Is the Clausewitz Theory on War Still Worth Studying

Von Clausewitz's writing has also become an interesting topic on study for scholars and students alike.

Carl von Clausewitz’s theory on war is valuable to war strategists and politicians alike. Although the theory cannot be said to be wholly applicable to all modern situations, a critical look at the book reveal valuable themes worthy studying and applying in conflict management and especially war. Especially viewed against the background of the fact that there was no much technological advancement in the 1800s. Clausewitz might have had in mind a world whereby he never foresaw any technological gains especially with the advent of computers. It is not ordinary that Clausewitz could have imagined the atomic bombs t...
9 Pages(2250 words)Essay

Different Factors That Cause Food Spoilage

The mechanism of action of these microbes is quite interesting. For example, some microbes release enzymes into the liquid surrounding them and absorb nutrition from the fluid digested externally. On top of that, this process of digestion leaves behind a residue of toxic waste, which is poisonous. That is why food items (both natural and processed) with high fluid content tend to be more susceptible to spoilage. So this is one internal or intrinsic condition for food spoilage.
Also, the vulnerability of a food item for a microbe attack is largely determined by its classification. Food such as carbohydrates, fats, and proteins are made up of organic compounds, whose nutrition attracts microbes. On the other hand vitamins and m...
6 Pages(1500 words)Assignment

Was Dropping the Bomb on Japan Really Necessary

Had this been done, could the wanton destruction of a predominantly civilian population be avoided? Considering this, it is necessary to question the true motivations of President Truman in his authorization of the bombs’ use. Was it actually to bring about a swift end to the protracted deadly conflict and ultimately intended to save lives, American and Japanese, that would be lost in an overland confrontation? Or was it, as has been suggested, more a decision based on keeping the Soviet Union from having any input regarding the division of post-war Asia as it had in dividing post-war Europe? Even if the first bomb, dropped on Hiroshima could be argued as justifiable, the widespread destruction and collateral damage was deva...
9 Pages(2250 words)Assignment

However, whether to fulfill basic needs or for prestige, what people buy usually make a statement about them and the sense of identity they have found themselves in. A consumer’s sense of identity will place them in a certain class based on their social power. Their possessions relate to the way they define themselves and how they are perceived by society and this paper will argue that people buy things they feel represent their identities and class.
Purchases motivated by class serve purposes related to personal enrichment and, more importantly, self-esteem. The social class concept introduced to marketing literature shows that the real or perceived social class in which a person belongs will influence the type of good...
6 Pages(1500 words)Assignment
sponsored ads
Save Your Time for More Important Things
Let us write or edit the essay on your topic "Organic food: is it really worth-buying" with a personal 20% discount.
GRAB THE BEST PAPER

Let us find you another Essay on topic Organic food: is it really worth-buying for FREE!