Subsaharan Africa Insurgent Movements :Must Include One or More Maps - Essay Example 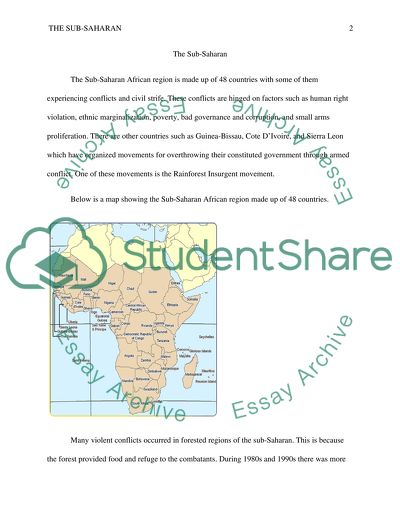 Extract of sample "Subsaharan Africa Insurgent Movements :Must Include One or More Maps"

The Sub-Saharan The Sub-Saharan The Sub-Saharan African region is made up of 48 countries with some of them experiencing conflicts and civil strife. These conflicts are hinged on factors such as human right violation, ethnic marginalization, poverty, bad governance and corruption, and small arms proliferation. There are other countries such as Guinea-Bissau, Cote D’Ivoire, and Sierra Leon which have organized movements for overthrowing their constituted government through armed conflict. One of these movements is the Rainforest Insurgent movement.
Below is a map showing the Sub-Saharan African region made up of 48 countries.
Many violent conflicts occurred in forested regions of the sub-Saharan. This is because the forest provided food and refuge to the combatants. During 1980s and 1990s there was more protracted conflict and violent in some of the Sub-Saharan countries. Liberia started its first civil war in 1989 while Cote d’Ivoire got into civil strife in 2002. The Sub-Sahara region is rich of green forest and have characteristics associated with violent conflict. For instant, the forested areas tend to be inaccessible and remote making it easier for insurgent to escape from government troops. In addition, they have petroleum, valuable timber, land, gold, diamonds, ivory, and other minerals which can be exploited by insurgents and fund their movements.
Governments viewed forested areas as peripheral places with little political importance and few people. These areas were poorly integrated into political processes and received few public services. In addition, the dominant ethnic groups marginalized tribal and indigenous people in forested areas. The marginalized people were limited to employment opportunities and experienced poor living standards. Ethnicity became a dividing factor among societies and influenced the eruption of civil strife and violent conflicts. The ethnic tension led to the development of Rainforest Insurgent movements. However, It was easy for insurgents to take up arms from the forested region since the marginalized people saw it as an opportunity to rebel against the corrupt government.
The Rainforest Insurgent movements in the Sub-Saharan region significantly affected the developed world economies. The forested regions had a wealthy natural resource base. Most of the insurgents extracted these forest resources and traded them with developed countries to raise funds for their movements. For instance, in “the Democratic Republic of Congo” high-value metals like cassiterite and Columbo-tantalite were traded with European countries to generate capital for DRC rebel groups. In addition, countries such as Sierra Leone, Liberia and Angola extracted alluvial gold and diamonds in remote forest regions, to gain money for rebellion activities. The Rainforest Insurgent movements influenced most of developed countries to support the rebel groups through trade activities. This influenced economic growth of the developed countries.
The Rainforest Insurgent movements also had significant effects on the Rainforest ecosystem. The armies involved in the movement burnt and cleared forested regions with defoliants to spot their opponents more clearly. They also hunted wildlife for food. In addition, land mining did not only maimed and killed people, but also maimed and killed large mammals such as gorillas. However, there were benefits associated with the Rainforest Insurgent movements in improving the natural forest resource. The movement forced large numbers of communities to flee from their rural areas. This allowed regeneration to occur in the abandoned areas. In addition, the vast land mines kept civilians out and promoted conservation of the places that had been cleared.
In conclusion, Sub-Saharan African regions experienced conflicts and civil strife through insurgent movements such as the rainforest insurgent movements. Out of the 48 Sub-Saharan countries, Guinea-Bissau, Cote D’Ivoire, and Sierra Leon were the main countries involved with armed conflicts. In addition, the forest regions influenced the occurrence of insurgent movements because they provided resources for funding the movements.

“Subsaharan Africa Insurgent Movements :Must Include One or More Maps Essay”, n.d. https://studentshare.org/geography/1664613-subsaharan-africa-insurgent-movements-must-include-one-or-more-maps.
Comments (0)
Click to create a comment or rate a document

CHECK THESE SAMPLES OF Subsaharan Africa Insurgent Movements :Must Include One or More Maps

More Than One Child In One Family

...﻿More Than One Child In One Family Introduction China is the most populated country in the world with total population of over one billion. The rapid increase in the population growth rates as well as the economic conditions of the country in past forced government to impose the policy of having one child in the family. This was intentionally done in order to ensure that population growth rates are reduced and the overall population is also controlled. It is believed that the implementation of this policy 30 years ago resulted into the decline of population by almost 400 millions thus allowing China to control its population. It is however, important to note that China has made great economic progress during recent times and is the fastest...
4 Pages(1000 words)Essay

...?GPS Vs. Paper Maps The ability to define various locations with GPS and paper maps is one which creates a sense of defining the locations and the capacity to locate a specific area. The paper maps generally worked better than the GPS because it was more accurate in defining the specific locations, while errors and misinterpretations occurred with the GPS. The statistical difference that is noted between both comes from the methodology that is used. With the GPS system, there is a coordination based on degrees, minutes and seconds that is converted into the navigation of where one needs to go as well as how long it will take to get to a given location. The paper map system uses statistics of basic length as well as a generalized location...
6 Pages(1500 words)Essay

The review will also identify the information gaps that require further review. Search Strategy The inclusion criteria include the sources covering the topic on HIV/Aids Prevention Policy in Sub-Saharan Africa (Zambia) and spanning from 2000 to date. The exclusion criteria involved the removal of the duplicates, articles not relevant to the topic, those that lack conclusive data as well as other reasons (Figure 1). However, information from the older sources will be included i.e. published or evaluated before 2000 in cases where the identified sources import information from older sources. The main factors that will form the scope of the study include HIV/AIDS prevalence in Zambia, policy overview, interventions, recommendations...
8 Pages(2000 words)Essay

...?Introduction As a rule, maps are regarded as a geographical tool mainly. However, regardless of its seeming simpli the aims and purposes that are pursued by creating a map are varied. Therefore, alongside with the purely geographical aims, the maps can be used as a political, sociological, or military tool; so, the cartography had been always regarded as one of the most important sciences ever, and served as an indicator of a civilization development. The aim of this paper is to study the map by the New Yorker J. Barber, published in 1776 by W. Hawkes, its background, the purpose of its creation, and the audience, which it was intended for. Background Study The map, offered for the analysis is The Country Twenty-Five Miles Round New York...
3 Pages(750 words)Admission/Application Essay

Running Head: PERCEPTUAL MAPS Perceptual Maps in APA Style by a. What would a perceptual map of your own industry (Aerospace) look like Where would you go to get data for your industry
Perceptual mapping is an important strategic management technique utilized by business organizations in order to understand the competition in their respective industry (Kotler 2001). One of the major strengths of perceptual mapping is its flexibility and usability in every sector.
In the case of the aerospace industry, perceptual mapping is an essential tool which shows how companies position themselves in terms of pricing and the level of service offered. It should be noted that before the deregulation of the airline industry, carriers hav...
2 Pages(500 words)Essay

The organisation secured a substantial new contract that can create 850 new jobs in the next two years but has to live up to the avowed standard of customer service.
The company specializing in management services to businesses and the general public has a turnover of 40 million and employs a staff of 1400 (fifteen years ago the company employed 3500 people) in 4 divisions in different locations in the North East of England. The special techniques and management systems the company developed made it an attractive 'outsourcing' destination for business services from a broad customer base including engineering and construction industries.
Increasing operational costs and the advent of information technology altered the bus...
14 Pages(3500 words)Essay

Insurgent Movements During and Immediately After WW2

...Insurgent Movements during World War II (French Résistance) Insurgent Movements during World War II (French Résistance) French Resistance was one of the insurgent movement that fought against Nazis Germany. It was a very heterogeneous movement. The myth created by Charles de Gaulle claims that Resistance played the important role in the liberation of France. However, the facts and documents cannot fully support this (Folker, 2012). The Resistance begun soon after the defeat in 1940. A part of the Frenchmen did not accepted the situation after Petain become a head of the country. The idea of Resistance was also partially connected with the xenophobia. The roots of xenophobia are in the consequences of Franco-Prussian War and the fact...
2 Pages(500 words)Essay

... level have been significantly rising. Despite the implications of the climate change, the earth must still supply living organisms inclusive of human being with water, shelter, andair. Thus, organizations like Globalgiving among others are coming up with projects with the aim of mitigating these conditions before elastic irreversible limits (Barnett & Campbell, 2010). Project Description Green Map is a project that has been initiated by the Globalgiving through funding from donors with the aim of elevating communities to live healthily and in a more sustainable place by providing conscious awareness to the decline in ecological, environmental and complexities related to climate change. Through this project in around sixty five countries...
5 Pages(1250 words)Essay

The business world is faced with calamities in strategy from but not because the managers cannot come up with useful strategies but because there is a deficiency in the execution of this strategy. Research shows that seventy percent of the strategy failures arise due to poor performance but not because of poor vision or lack of smarts. Strategy maps refer to diagrams that are used to document the primary strategic goals followed by a management team or organization. Strategy maps are essential elements of the documentation related to the balanced scorecard. Additionally, it is a feature of the second generation of balanced scorecard models that initially started in the mid-1990s (Armitage, 2004, p. 104). The initial diagrams were...
4 Pages(1000 words)Research Proposal
sponsored ads
Save Your Time for More Important Things
Let us write or edit the essay on your topic "Subsaharan Africa Insurgent Movements :Must Include One or More Maps" with a personal 20% discount.
GRAB THE BEST PAPER

Let us find you another Essay on topic Subsaharan Africa Insurgent Movements :Must Include One or More Maps for FREE!