Comments (0)
Add to wishlist Delete from wishlist
Cite this document
Summary
The region is basically a continent that constitutes the southern area of the landmass of America. For a land mass the size of a continent, the structure of geography of Latin…
Download full paper File format: .doc, available for editing
HIDE THIS PAPERGRAB THE BEST PAPER91% of users find it useful 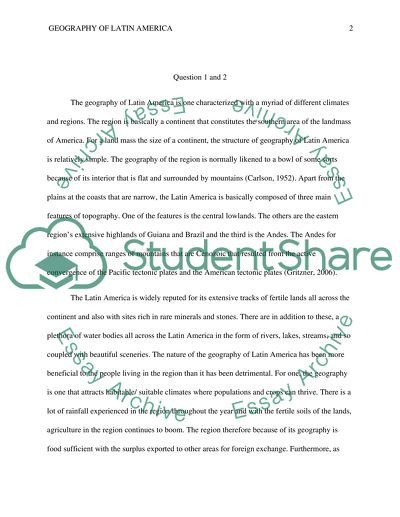 Geography of Latin America Number Question and 2 The geography of Latin America is one characterized with a myriad of different climates and regions. The region is basically a continent that constitutes the southern area of the landmass of America. For a land mass the size of a continent, the structure of geography of Latin America is relatively simple. The geography of the region is normally likened to a bowl of some sorts because of its interior that is flat and surrounded by mountains (Carlson, 1952). Apart from the plains at the coasts that are narrow, the Latin America is basically composed of three main features of topography. One of the features is the central lowlands. The others are the eastern region’s extensive highlands of Guiana and Brazil and the third is the Andes. The Andes for instance comprise ranges of mountains that are Cenozoic that resulted from the active convergence of the Pacific tectonic plates and the American tectonic plates (Gritzner, 2006).
The Latin America is widely reputed for its extensive tracks of fertile lands all across the continent and also with sites rich in rare minerals and stones. There are in addition to these, a plethora of water bodies all across the Latin America in the form of rivers, lakes, streams, and so coupled with beautiful sceneries. The nature of the geography of Latin America has been more beneficial to the people living in the region than it has been detrimental. For one, the geography is one that attracts habitable/ suitable climates where populations and crops can thrive. There is a lot of rainfall experienced in the region throughout the year and with the fertile soils of the lands, agriculture in the region continues to boom. The region therefore because of its geography is food sufficient with the surplus exported to other areas for foreign exchange. Furthermore, as already stated, the geography of the lands boasts rocks that contain a number of minerals such as copper, tin and mercury from the Altiplano, that are mined for monetary value (Webb, 1972).
Because of this good geography too, the Latin America has provided a suitable habitat for wildlife species such as in the Amazon that continue to elicit great tourism revenues. Other natural beauties of this geography such as the Iguazu falls in Argentina and the Perito Moreno glacier also bring in millions of tourists to the region annually. Because of all these activities that have been facilitated by the generous geography of the area, the region continues to experience great economic growth and the improvement of standards of living of the people. Trade in the region has also grown due to increased power of purchase and great economic activities, services and products (Gritzner, 2006).
However, mankind has also played some role in the geography of Latin America over time and more often than not these human interventions whether deliberate or not only serve to degrade the geography and the environment of the area with consequences patiently massing up with time. With increases in population, mankind has encroached into previously uninhabited lands such as forests and cleared them. This clearing has also been to facilitate for more room for agriculture (livestock or crop). The result is reduced quality and productivity of the ecosystem. Mining has also resulted in valleys and derelict topographies that have been rendered useless for both man and animals. But perhaps the most prominent of these human interventions is poor agricultural practices that have left lands open to soil erosion and so on. A good example of this is eastern Peru at the area where the Amazon lowland meets the eastern flank where land has been cultivated for agricultural gains leaving the area susceptible to massive soil erosions especially after harvests (Webb, 1972).
Question 3: Opinion and Conclusion
Basically, the most notable feature in Latin America is the Andes (comprising mountain ranges) which extends from south to north of the western region of the continent. In the Eastern region of Latin America are other older highlands – the Guiana Highlands and the Brazilian highlands. And in between these two highland ranges of the west and the east are lowlands that are drained by major river systems. The lowlands are the most productive, fertile and populated hence (Carlson, 1952). The region’s activities such as agriculture and tourism are greatly boosted by this suitable geography and its resulting climate. However, it is my opinion, as has been clearly evident over time, that prudent measures of managing mankind and wildlife activities are necessary in order to protect the region and its good climate/ geography.
References
Carlson, F. A. (1952). Geography of Latin America (3d ed.). New York: Prentice-Hall.
Gritzner, C. F. (2006). Latin America. New York: Chelsea House Publishers.
Webb, K. E. (1972). Geography of Latin America; a regional analysis. Englewood Cliffs., N.J.: Prentice-Hall. Read More
Share:
Tags
Cite this document
(“Latin America Essay Example | Topics and Well Written Essays - 500 words - 1”, n.d.)
Latin America Essay Example | Topics and Well Written Essays - 500 words - 1. Retrieved from https://studentshare.org/geography/1662882-latin-america

... at the verge of losing some of the foreign –trade benefits from the United States. Research experts have documented the elements of colonial legacy in the history of Latin American nations. Latin American nations have shown their willingness to share a common past of colonialism, freedom struggle, racial discrimination, poverty, political instability and foreign interferences. Analysing the economic growth of Central American nations like Costa Rica one can comprehend that the implementation of Free Trade Agreement failed to enrich Costa Rica’s economic growth. Colonial legacies in Latin American nations tried to learn the negative side of Free Trade Agreement because America considers the FTA as a political instrument than economic affair...
1 Pages (250 words) Assignment

...from conquests, through colonization and revolutions and to modern day violence- all of which has played a major role in various stages of its advancement (2001). In this paper, we shall discuss how the abuses committed by foreign invaders – first the Spaniards, then conquer of Veracruz by France and ultimately the imperial rule imposed by the United States has shaped the history of Latin America (L.A). The two biggest empires of Latin America, Aztec and Incas, were conquered and exploited by the Spaniards. Hernan Cortes and Francisco Pizarro respectively were the main leaders of the Spaniards behind the conquests of these two large empires. Cortes who was a Spanish conquistador had attacked the city of Aztec with a small troupe of 600...
3 Pages (750 words) Essay

...adequately describes how the Bolivian troops sold out Che Guevara. With the help of the CIA, he was killed. This is one of the things that he worked so hard against. This was the entrance, control and dominance of western influences in Latin America (Anderson, p 78). He saw this as a strong form of Neo Colonialism. This exploited the Latin American people without them even knowing it. Sex and Danger in Buenos Aires: Prostitution, Family and Nation in Argentina The author of this text looks keenly into the life of many families in the nation of Argentina (Guy, p 11). This is with consideration to the time where prostitution was legal in the country. The text describes prostitution as an...
3 Pages (750 words) Book Report/Review

Monroe Doctrine was a proof of new American imperialism, which attempted to secure American interests in the Western Hemisphere, as is evident from the speech of President James Monroe, delivered on the occasion of seventh annual meet of the Congress on December 2, 1823. It was made clear to the Western nations that America wanted no outside interference in the political matters of the countries of Western Hemisphere. Actually, the Monroe Doctrine was an indication of American desire to increase its political hold on the Latin countries, being ruled by proxy of the European powers. The purpose of the Doctrine was initially concurrent; it aimed to thwart away the European powers from the region, which later became part of its poli...
5 Pages (1250 words) Essay

... for Guatemala Was Wrong.” The Washington Post 11 March 1999: A1. Print. Byrne, Hugh. “We Will be Known by the Company We Keep: Lessons from US-Latin America Policy for the Post-September 11th World.” The Latin America Working Group. 2002. Web. Carter, Tom. “Guatemala Apology Deplored, Defended.” The Washington Times 12 March 1999 final ed.: A1. Print. National Commission on the Disappearance of Persons. “Never Again.” 1984. 440-447. Print.... Full Your 19 November Reading Response In Guatemala, in the guise of eliminating “internal enemies”, the repressive regimes started to crack down on people who opposed them in any way. Starting from a list of people to be eliminated in the Arbenz regime, given to them by the CIA, the organized workers...
2 Pages (500 words) Essay

..., and this highlights how the different European countries that conquered Latin America had different economic policies and approaches. For example, Spain conquered Latin America in order to exploit the natural resources in the region and export them to Europe. This form of exploration favored the state controlled type of economy, which, according to the article, persists till today. On the other hand, countries such as Netherlands and England favored free trade where they allowed for the production of sugar, cotton and tobacco, which were sold to other countries for profit. These were the basis of globalization and free markets. This explains why certain countries in...
1 Pages (250 words) Essay

...space. In my opinion, I believe that the human population in this region and others should strive towards sustainable living. This will help in reducing landscape damages that may lead to conflict and other ills. References Bartschi, A. (n.d.). Problems in the Amazon. Retrieved 09 October 2014 from http://wwf.panda.org/what_we_do/where_we_work/amazon/problems/. Erickson, C. (n.d.). The Lake Titicaca Basin A Pre-Columbian Built Landscape. Retrieved 09 October 2014 from http://www.sas.upenn.edu/anthropology/system/files/EricksonLentzvol.pdf. Pacheco, P., Aguilar-Stoen, M., Borner, J., Etter, A., Putzel, L & Diaz, M. (2011). Landscape Transformation in Tropical Latin America: Assessing Trends and Policy Implication for REDD+. Forests, 2,...
2 Pages (500 words) Essay

...permanently. In addition, thousands of people moved in to work on the projects, an aspect which further led to degraded environment and global warming. The subdivision of land led to reduced food, turning small holder’s farmers into peasants ( Hobbs, 2008). Mining areas degraded farming lands and destroyed the natural environment for micro-organisms. These developments were both for worse and better of the region. For worse, the natural environment had been destroyed and better, it lead to production of minerals which spurred economic growth. 2) How what the people did, regarding the regions physical geography, affect its political future and institutions? Initially, the entire Latin America was under colonial government which also had...
2 Pages (500 words) Essay

... from the Christian missionaries and made it easier to communicate. Consequents religion has brought events like carnival Reo de Jenairo that is celebrated annually. Foreigners come to spend hundreds of dollars that generate revenue to the continent thus improving their economy. Reference Keen, B & Haynes, K. (2012). A History of Latin America, Volume 2. New York: Cengage. Un-Habitat. (2012). Enhancing Urban Safety and Security: Global Report on Human Settlements 2007. London: Routledge.... Latin America Influence of the Inhabitants on the Physical Environment South America is home to people from different areas such as Columbia, Brazil, Uruguay, Paraguay, Chile and Argentina. Physical...
2 Pages (500 words) Essay
sponsored ads
Save Your Time for More Important Things
Let us write or edit the essay on your topic "Latin America" with a personal 20% discount.
GRAB THE BEST PAPER