Comments (0)
Add to wishlist Delete from wishlist
Cite this document
Summary
Most of these countries are developing countries. Saudi Arabia provides enormous opportunities of employment for these people.
A significant population of migrant workers in Saudi…
Download full paper File format: .doc, available for editing
HIDE THIS PAPERGRAB THE BEST PAPER97.9% of users find it useful 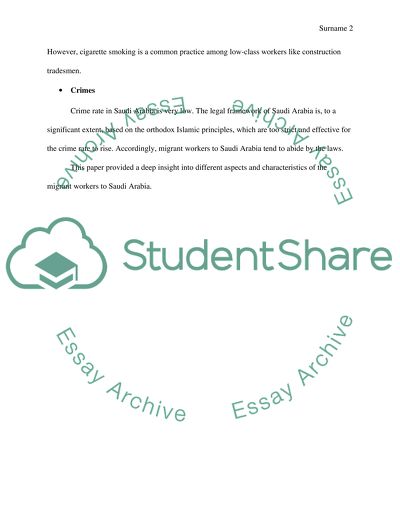 CHECK THESE SAMPLES OF Migrant workers to Saudi Arabia

In simple terms, migration can be defined as the process of the movement of people from one place to another occurs for better living prospects or job opportunities. Migration usually occurs internally and externally. In other words, migration cane takes place within the boundaries of the country and also between different countries. Globalization, liberalization and privatization like modern economic principles gave momentum to the migration activities. Countries like India, Pakistan, Sri Lanka etc have excessive labor forces and lesser job opportunities whereas countries or regions such as America, Europe, Middle East have excessive job opportunities and lesser manpower. In order to keep a balance between the number of labor fo...
10 Pages (2500 words) Essay

... Saudi Monarchy and its along the Passage of History ]In a fair political term, the political system of the Kingdomof Saudi Arabia can be considered as absolute monarchy. Indeed Saudi Arabian monarchy considers the king as the head of both the state and its government. The King of Saudi Arab functions as the chairman of the country’s Council of Ministers. But since the country is ruled according to the Islamic Laws, the King does not preserve any right to enact laws. He only “issues royal decrees in accord with the shari’a” (Matthes et al 2). The most difficult duty that the King has to perform is to maintain a balanced and harmonious relationship among the Royal Family members, the upper-class people of the society and the Ulama...
7 Pages (1750 words) Essay

...?  Migrant Workers in North America           Migrant Workers in North America Introduction Migrant labor is a phrase used in the United States to refer to workers who move from one place to another harvesting product that need to be collected as soon as they are ripe. Migrant labor refers to a situation where unskilled and casual workers move steadily from a single area to another providing their services on an impermanent, normally recurrent, basis. Migrant labor in different forms is found in North America, South Africa, India, Western Europe, and the Middle East. In both the Middle East and Europe, migrant labor habitually has been employed for urban instead of agricultural work and entails prolonged durations of residence (Foner, 2001...
5 Pages (1250 words) Research Proposal

... has been going on for many years in this country. In addition, the king has also promised that the Shura Council would also have women as full members, soon. Women are not allowed to drive in this country. Recently a lady, named Manal-al-Sharif, was arrested for driving a car. However, she was released after making an appeal to the king. Although there is no law governing the women drivers in Saudi Arabia, the senior religious leaders, guided by the Shari’a and their own interpretation of Koran, are against allowing women to drive in this country. A campaign called, “women2drive” has started in the kingdom, to liberate women from such prohibition. (World Report 2012) Rights of migrant workers There is no law protecting the basic rights...
15 Pages (3750 words) Research Paper

It stands as a significant industrial country, claiming over 25% of the global oil reserve. It is this wealth in oil that Saudi Arabia is known for and is what drives the country’s economy. Considered as the origin of Islam, the country has been keen to preserve its historical richness with the passage of time. Geography Saudi Arabia occupies about 80% of the Arabian Peninsula, measuring 865,000 square miles, just about 25% of the total surface are of the US. This is a big country as compared to the size of other countries globally. The country borders the United Arab Emirates, Qatar and the Persian Gulf to the east, Oman and Yemen to the south and Kuwait, Iraq and Jordan to the north. On the west, the Red Sea separates it from S...
5 Pages (1250 words) Research Paper

... Saudi Arabia The Kingdom of Saudi Arabia is located in a vital maritime location facing the Arabian Gulf and the Red Sea. The Kingdom has approximately 2100 km of coastal beaches attracting tourists seeking a little fun in the sun. These beaches, characterized by a vast variety of marine life, also bring a great deal of benefit to the kingdom’s fishery industry, representing a significant source of food and income for the local populace and businesses. Unfortunately, the Kingdom of Saudi Arabia has traditionally not put much effort into developing this industry. The craftsmen in the fishing trade are still using the traditional fishing boats just off the coastline. Most of these craftsmen continue to fish simply for local consumption...
6 Pages (1500 words) Essay

... on time or bad treatment by their employers. Foreign workers are employed under the sponsorship system in Saudi Arabia as well as other Gulf countries. Most workers come to Saudi Arabia through an invitation from their employers and they make a working contract with them. The employer can be an enterprise, an individual or even the State, when it concerns a post in the public sector example a doctor or an engineer. This system is highly criticized by international human rights NGOs and it creates a series of grave human rights violations, for example the ICERD. Employers behold migrant workers’ passports and therefore workers are totally at their mercy as they limit their liberty of movement. They are barred from changing jobs and cannot...
6 Pages (1500 words) Research Paper

...Migrant Workers to Qatar Source: Lonely Planet .Map of Qatar Migrant Workers to Qatar Qatar used to be a British protectorate popular for pearling until it attained independence. It has been ruled by Al Thani family from mid-1800s. The country contains significant oil and gas reserves. The Amir of Qatar crippled the Qatari economy by stashing the oil and gas revenues for himself. The Amir was overthrown by his own son Hamad bin Khalifa Al Thani in 1995 in a bloodless coup after having ruled the country since the year 1972 (Central Intelligence Agency, 2014). He ruled until 2013. Hamad saw the creation of Al Jazeera, an Arab broadcasting satellite network and pursued Qatar’s role in mediating conflicts in the Arab region. At the start...
2 Pages (500 words) Article

... (ICERD). Employers in Saudi Arabia confiscate migrant workers’ passports, and therefore the workers are totally at their mercy as the employers control the workers’ movement. They are barred from changing jobs and cannot leave their place of work. They are mistreated and denied their salary. Generally speaking, Saudi culture and its people have treated workers well. Workers can take part in all types of social communication, except discussing political issues because this is taboo. Asian countries such as Pakistan and India have the largest number of foreign workers in the area, which perhaps accounts for this social acceptance. There is a sense of unity among all these workers as well. Workers try to stay within their own...
7 Pages (1750 words) Research Paper
sponsored ads
Save Your Time for More Important Things
Let us write or edit the essay on your topic "Migrant workers to Saudi Arabia" with a personal 20% discount.
GRAB THE BEST PAPER

Let us find you another Essay on topic Migrant workers to Saudi Arabia for FREE!