Comments (0)
Add to wishlistDelete from wishlist
Cite this document
Summary
Fast food: positive and negative issues Nowadays, it can be noted that as a result of the increasing number of fast food chains in different places, many people prefer to eat fast foods. However, studies have confirmed that there are many problems with eating fast foods such as obesity and overweight…
Download full paperFile format: .doc, available for editing
HIDE THIS PAPERGRAB THE BEST PAPER96.5% of users find it useful 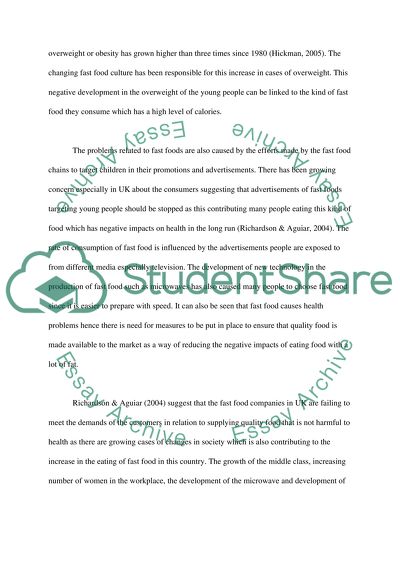 Download file to see previous pages However, the fast food centers have also increased in the U.K. This paper seeks to explore both the positives and negatives of fast food and the fast food culture. It is generally agreed that fast foods with higher amount of salt, fat and a higher amount of calories may have long term effects to our health and the most common impact of fast food on our health is obesity as suggested by many studies in this field which is going to be discussed below. Obesity is also related to other diseases such as heart attack given that the body of an individual will be carrying high levels of fat which is dangerous to health. According to Hickman (2005), food items such as burgers and pizzas are stuffed with food components that have higher levels of salt and fat and these are harmful to the body. Studies conducted about food sold by popular fast food centers namely McDonald’s, Burger King, KFC and Pizza Hut have shown that their fast food meals contain about 274 calories per 100g of food which is more than double that of home-made roast dinner (Hickman, 2005). It can be seen that the levels of calories in this food are so high such that the chances of harmful effects to the body are also very high. Studies that have also been conducted in UK show that the number of children between two to fifteen years with overweight or obesity has grown higher than three times since 1980 (Hickman, 2005). The changing fast food culture has been responsible for this increase in cases of overweight. This negative development in the overweight of the young people can be linked to the kind of fast food they consume which has a high level of calories. The problems related to fast foods are also caused by the efforts made by the fast food chains to target children in their promotions and advertisements. There has been growing concern especially in UK about the consumers suggesting that advertisements of fast foods targeting young people should be stopped as this contributing many people eating this kind of food which has negative impacts on health in the long run (Richardson & Aguiar, 2004). The rate of consumption of fast food is influenced by the advertisements people are exposed to from different media especially television. The development of new technology in the production of fast food such as microwaves has also caused many people to choose fast food since it is easier to prepare with speed. It can also be seen that fast food causes health problems hence there is need for measures to be put in place to ensure that quality food is made available to the market as a way of reducing the negative impacts of eating food with a lot of fat. Richardson & Aguiar (2004) suggest that the fast food companies in UK are failing to meet the demands of the customers in relation to supplying quality food that is not harmful to health as there are growing cases of changes in society which is also contributing to the increase in the eating of fast food in this country. The growth of the middle class, increasing number of women in the workplace, the development of the microwave and development of more areas in the UK which offer fast food have contributed to the increase in rate in which people fast food (Richardson &Aguiar, 2004). Other actors in the fast food industry are finding it attractive such that they are also seeking to fill the gap between customers and ...Download file to see next pagesRead More
Share:
Tags
Cite this document
(“Fast food: positive and negative issues Essay Example | Topics and Well Written Essays - 1000 words”, n.d.)
Retrieved from https://studentshare.org/family-consumer-science/1418706-fast-food-positive-and-negative-issues
(Fast Food: Positive and Negative Issues Essay Example | Topics and Well Written Essays - 1000 Words)
https://studentshare.org/family-consumer-science/1418706-fast-food-positive-and-negative-issues.
“Fast Food: Positive and Negative Issues Essay Example | Topics and Well Written Essays - 1000 Words”, n.d. https://studentshare.org/family-consumer-science/1418706-fast-food-positive-and-negative-issues.
Comments (0)
Click to create a comment or rate a document

CHECK THESE SAMPLES OF Fast food: positive and negative issues

Community life has its advantages but also has its limitations to the members and the outsiders.
“The good things we secure for ourselves are uncertain and precious until it is secured for everyone and incorporated into our common life.”-Jane Addams. With society moving faster and more detached to technology, busy schedules, and job changes, it becomes harder and harder to feel a sense of community. This can result in a life of solitude and a lose a sense of belonging. Community life helps extract people out of this solitude life and introduce better, challenging and fun tasks such as participation in acts of kindness. It also provides room for volunteering, meeting neighbors, discussing important issues with othe...
7 Pages(1750 words)Case Study
sponsored ads
Save Your Time for More Important Things
Let us write or edit the essay on your topic "Fast food: positive and negative issues" with a personal 20% discount.
GRAB THE BEST PAPER

Let us find you another Essay on topic Fast food: positive and negative issues for FREE!