Comments (0)
Add to wishlistDelete from wishlist
Cite this document
Summary
The author of the paper states that the impact of any natural disaster is quite drastic and unforgettable in the lives of human beings. Any natural calamity leaves a major impact on the usual way of living of individuals for quite a long period of time…
Download full paperFile format: .doc, available for editing
HIDE THIS PAPERGRAB THE BEST PAPER94.6% of users find it useful 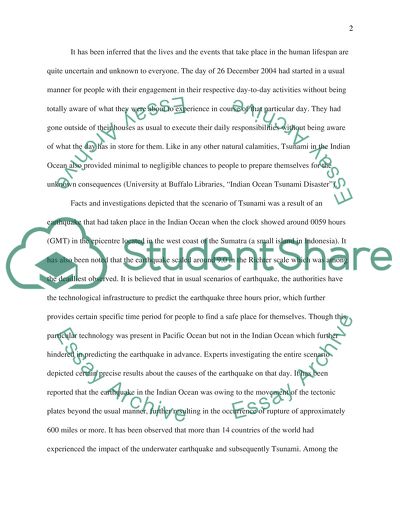 Download file to see previous pages Evaluation of the impact of one day in human life through analyzing the effects, causes and consequences of Tsunami and earthquake will be the prime area of deliberation for this study. It is believed that uncertainly is one evident aspect of the lives of human beings. Life of a human being is quite unpredictable in nature as no one is aware of what the future has in store for them. It is also believed that people and their surroundings change from time to time. This facet shows that time is an important element that has a major impact on the lives and wellbeing of people. It is further deliberated that it is just a moment that can change everything in the lives of humans. This might be in a positive or in a negative manner altogether. This aspect can be better comprehended from the example of natural disasters that change the lives of people mostly in a negative manner. A natural disaster is a particular scenario that is minimally controllable by human beings owing to which the consequences of the same become drastic (Lace 7-11). Contextually, the scenario of Tsunami (a natural catastrophe) had a set of major and unforgettable consequences which will be described in the later section of this particular discussion.

CHECK THESE SAMPLES OF 2004 Indian Ocean Earthquake and Tsunami

Japan economy after the earthquake and tsunami

...?Japan is one of the richest countries in the world and a member of the prestigious G8 group. The gross domestic product per capita of Japan is $32,600 (CultureGrams). On March 11, 2011 Japan was struck by tragedy when it was hit by the 4th largest earthquake in mankind’s history. The massive 9.0 earthquake and its subsequent tsunami devastated the people of Japan. The tsunami drowned entire villages. Over 13,000 people lost their lives in the natural disaster and over 14,000 additional people still missing (Gather). The earthquake that hit Japan along with causing great human suffering had devastating effects in the economy of Japan. The purpose of this paper is to describe the economic effects of the March 11th earthquake on Japan...
3 Pages(750 words)Research Paper

Earthquake and tsunami in Japan

Earthquake and Tsunami in Japan This paper focuses on the water uses especially after a natural disaster like earthquakes and tsunamis have occurred, as in the case of Japan which happened on the eleventh of March this year. Apart from personal hygiene, drinking, cooking, irrigating crops and landscapes, water is used for cooling, recreation and dust control. Again in the case of the recent Japan disaster, the most important water use was for the cooling on the nuclear power plant at Fukushima, northeast of Japan which was damaged by the earthquake and tsunami. This has caused the leak of radioactive substances into the surrounding environment and the sea. Radioactive substance is a great threat to both live and property. The rest...
2 Pages(500 words)Research Paper

... Japan Earthquake and Tsunami The world has progressed and there have been technological breakthroughs and advancements which have greatly empowered human beings. The human mind has progressed and people have started to utilize their knowledge and expertise for the achievement of excellence and developments in the field of science and technology. Man has tried to achieve total control over their lives and the happenings in the world. But certain happenings clearly indicate the fact that there are still certain fields over which there is no human control and man cannot avoid these inevitable circumstances that result due to the actions of nature. Natural disasters account as a perfect example signifying the limitations of the human...
9 Pages(2250 words)Term Paper

..., though there has to be uninterrupted supervision of human mind. “An alert, observant, analytical, proactive, far-seeing human mind is a thousand times more valuable than gadgets and technologies in the prevention and mitigation of disasters and crises” (Raman). Works Cited: National Geographic News. “The Deadliest Tsunami in History?” 7 Jan. 2005. Web. 22 Aug. 2011.

...Indian Ocean Tsunami On the 26th of December 2004, people living on the Indian Ocean coast in Asia experienced that had never been seen before. An earthquake with a magnitude of 9.3 according to the Richter scale struck the area causing giant sea waves to rise from the Indian Ocean. This short discussion presents some possible measures that could have been implemented to avert the situation. Although destructions resulting from tsunami were unavoidable, people living in the affected areas could have applied several techniques to prevent the damages. Proper and planned buildings could have greatly reduced loss of life and property experienced in the region. Proper building strategies should have promoted buildings with escape routes...
1 Pages(250 words)Essay

Sociology of the 2004 Indian Ocean Earthquake and Tsunami

... the case of the 2004 Indian Ocean Earthquake and Tsunami of how society prepares for, responds, copes, and behaves during a disaster and derives useful lessons both for sociology and for advancement of the science of homeland security. The over-riding objective is that through the case study, we hope that society and homeland security professionals can improve their work related to disaster preparedness and response. The 2004 Indian Ocean earthquake refers to the earthquake that struck at 0:59 GMT on 26 December 2004 with a magnitude of 9.3 with the epicenter at 160 km west of Sumatra, Indonesia and 900 km southwest of Penang, Malaysia (Horton et al., 2008, p. 307). An encircled star in the southwestern area of Figure 1 indicates...
8 Pages(2000 words)Research Paper
sponsored ads
Save Your Time for More Important Things
Let us write or edit the research paper on your topic "2004 Indian Ocean Earthquake and Tsunami" with a personal 20% discount.
GRAB THE BEST PAPER

Let us find you another Research Paper on topic 2004 Indian Ocean Earthquake and Tsunami for FREE!