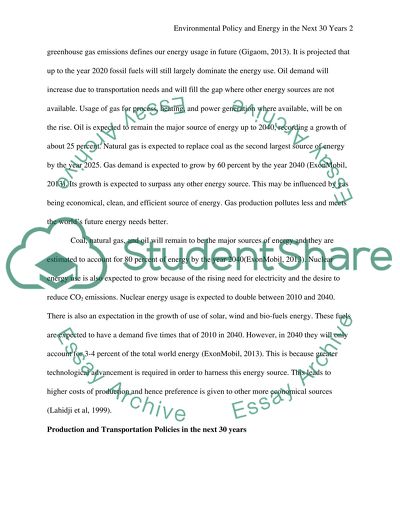 Download file to see previous pages The policies that are adopted should be geared towards invention of new energy sources to support those that are being depleted and the production, transportation and usage must ensure environmental sustainability. This paper examines the trend in the production, transportation, and usage of energy in the next thirty years, and secondly, the environmental impact due the forecasted trends. Trends in the Production, Transportation, and Consumption of Energy in the next 30 years Energy policy is the way in which the government or an entity decides to address energy, production, distribution, and consumption. The components of such a policy may include international treaties, legislations, offering incentives to investment, taxation and other public policies (AuthorStream, 2012). Consumption The global energy demands are expected to rise by 30 percent from 2010 to 2040 (ExonMobil, 2013). This calls for diversification of energy sources, seeking reliable and affordable sources of energy. It is only through this mix that energy can promote economic growth and social advancement. The world is changing with improved standards of life; introduction of modern appliances and fuel efficient vehicles coupled with limitations of greenhouse gas emissions defines our energy usage in future (Gigaom, 2013). It is projected that up to the year 2020 fossil fuels will still largely dominate the energy use. Oil demand will increase due to transportation needs and will fill the gap where other energy sources are not available. Usage of gas for process, heating, and power generation where available, will be on the rise. Oil is expected to remain the major source of energy up to 2040, recording a growth of about 25 percent. Natural gas is expected to replace coal as the second largest source of energy by the year 2025. Gas demand is expected to grow by 60 percent by the year 2040 (ExonMobil, 2013). Its growth is expected to surpass any other energy source. This may be influenced by gas being economical, clean, and efficient source of energy. Gas production pollutes less and meets the world’s future energy needs better. Coal, natural gas, and oil will remain to be the major sources of energy and they are estimated to account for 80 percent of energy by the year 2040(ExonMobil, 2013). Nuclear energy use is also expected to grow because of the rising need for electricity and the desire to reduce CO2 emissions. Nuclear energy usage is expected to double between 2010 and 2040. There is also an expectation in the growth of use of solar, wind and bio-fuels energy. These fuels are expected to have a demand five times that of 2010 in 2040. However, in 2040 they will only account for 3-4 percent of the total world energy (ExonMobil, 2013). This is because greater technological advancement is required in order to harness this energy source. This leads to higher costs of production and hence preference is given to other more economical sources (Lahidji et al, 1999). Production and Transportation Policies in the next 30 years Fossil fuels as earlier stated are expected to remain the most dominant energy source in the next 30 years. Advanced and more efficient technologies are expected to be developed in the production of fossil fuels in the next 30 years. Coal has normally been criticized for polluting the environment, the next 30 years may see introduction of new ...Download file to see next pagesRead More
Share:
Tags
Cite this document
(“Environmental policy and energy in the next 30 years Research Paper”, n.d.)
Environmental policy and energy in the next 30 years Research Paper. Retrieved from https://studentshare.org/environmental-studies/1466737-environmental-policy-and-energy-in-the-next
(Environmental Policy and Energy in the Next 30 Years Research Paper)
Environmental Policy and Energy in the Next 30 Years Research Paper. https://studentshare.org/environmental-studies/1466737-environmental-policy-and-energy-in-the-next.
“Environmental Policy and Energy in the Next 30 Years Research Paper”, n.d. https://studentshare.org/environmental-studies/1466737-environmental-policy-and-energy-in-the-next.
Comments (0)
Click to create a comment or rate a document

The relatively recent demarcations of the Iranian nation’s borders reflect primarily a correlation with rivers and watersheds, or else areas of low human occupancy like swamplands, inhospitable deserts, or marsh. Iran contains some areas of low-land in the western plains, as well as on the coasts of the Persian Gulf and the Caspian Sea. The physical geography of Iran has been compared to a bowl: a high outer rim enclosing a lower, albeit not low-lying, interior. The “rim” as such consists of mountain ranges that extend from Asia Minor and the Caucasus as far as the plains of Punjab. Taking all of these features into account, however, the average elevation of the entire country is roughly about three thousand feet...
8 Pages(2000 words)Assignment

..., a viable market economy and the capacity of the Nation to abide by the policies of the European Union. The Commission screens the suitability of the country in the light of 35”chapters” like food safety, agriculture, energy and transport policies, foreign and security policies etc. Before the negotiations begin, the country may be asked to fulfill certain benchmarks, and the procedure varies depending on the merit of the applying country. The country must indicate a time-line for the implementation of the EU policies and processes. “When all negotiations are complete to the unanimous satisfaction of the member countries, a Draft Accession Treaty is compiled and submitted to the Council, Commission, Parliament and member countries...
9 Pages(2250 words)Case Study
sponsored ads
Save Your Time for More Important Things
Let us write or edit the research paper on your topic "Environmental policy and energy in the next 30 years" with a personal 20% discount.
GRAB THE BEST PAPER

Let us find you another Research Paper on topic Environmental policy and energy in the next 30 years for FREE!