Comments (0)
Add to wishlistDelete from wishlist
Cite this document
Summary
Introduction Today businesses and organizations are competing in an extremely competitive environment. Therefore, each is trying to find some competitive advantage to override the rivals. While technology, communications or effective marketing may perform such a role, the importance of human resources cannot be underestimated since success of a business is based on the successes of each separate employee…
Download full paperFile format: .doc, available for editing
HIDE THIS PAPERGRAB THE BEST PAPER97.2% of users find it useful 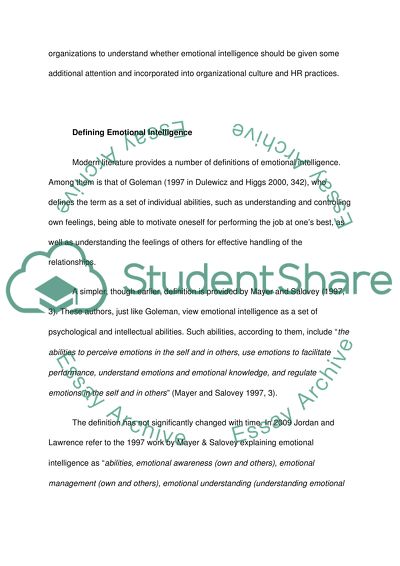 Download file to see previous pages As such, the idea has found much popularity among managers in their attempts to bring up a successful and efficient workforce. The assumption that emotional intelligence directly influences job performance leads, as a result, to the thought that emotional intelligence might become of the keys to improved business performance and, consequently, higher profits. Though there exists a number of studies on the relation of emotional intelligence to employee effectiveness, many of them present different points of view. Therefore, the purpose of the given work is to review and analyze some of the most recent researches on the topic of emotional intelligence’s relation to employee performance with the purpose of determining whether there is, indeed, a positive correlation between the two. The findings will, therefore, help businesses and organizations to understand whether emotional intelligence should be given some additional attention and incorporated into organizational culture and HR practices. Defining Emotional Intelligence Modern literature provides a number of definitions of emotional intelligence. ...
Such abilities, according to them, include “the abilities to perceive emotions in the self and in others, use emotions to facilitate performance, understand emotions and emotional knowledge, and regulate emotions in the self and in others” (Mayer and Salovey 1997, 3). The definition has not significantly changed with time. In 2009 Jordan and Lawrence refer to the 1997 work by Mayer & Salovey explaining emotional intelligence as “abilities, emotional awareness (own and others), emotional management (own and others), emotional understanding (understanding emotional cycles and progressions) and emotional facilitation (generating emotions) (Jordan and Lawrence 2009, 453). Therefore, it can be concluded that the term ‘emotional intelligence’ means human ability to realize and understand feelings (both own and those other people), to effective cope with emotions, as well as express own or evoke emotions of others with the purpose of dealing with specific situation in the most efficient way. Literature Review At the same time Stephane Cote and Christopher Miners (2006) of the University of Toronto point out that though the concept of emotional intelligence has raised much interest of businesses and organizations, there is a relatively low number of studies that prove emotional intelligence is really important for managing an organization effectively or that it is directly related to job performance (Cote and Miners 2006, 1). Furthermore, Barrett et al (2001, 1) even argue that the increase in the topic’s population is based on its being advertised rather than on profound scientific evidence. Nevertheless, some studies exist. In 2005 Brett Anthony Hayward, for instance, conducted a research with the ...Download file to see next pagesRead More
Share:
Tags
Cite this document
(“Organisation business Essay Example | Topics and Well Written Essays - 2000 words”, n.d.)
Retrieved from https://studentshare.org/environmental-studies/1415793-organisation-business

CHECK THESE SAMPLES OF Organisation business

On the other hand, these globalization standards are opposed by some critics and argue that globalization does not have to be a requirement for putting up a business in other countries, thus it is just a choice for entering a foreign market. Accordingly, standardization is applicable specifically to high-end markets and with accord to the market segmentation such as the trends that the young people patronize (Mullman, 2006) Regardless of the idea that globalization is mostly based on how the company standardizes the products, the home country still holds the profitability of the business as the economy affects how the foreign investors and other national sources back up the business (Stiglitz, 2006).
Making the world flat mak...
9 Pages(2250 words)Assignment
sponsored ads
Save Your Time for More Important Things
Let us write or edit the essay on your topic "Organisation business" with a personal 20% discount.
GRAB THE BEST PAPER

Let us find you another Essay on topic Organisation business for FREE!