Comments (0)
Add to wishlist Delete from wishlist
Cite this document
Summary
The paradox is a contradictory statement that makes sense on closer look, for example, ‘I am a compulsive liar’…
Download full paper File format: .doc, available for editing
HIDE THIS PAPERGRAB THE BEST PAPER95% of users find it useful 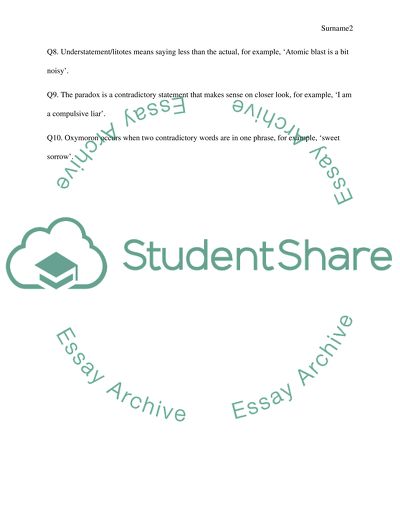 Extract of sample "Figures of Speech"

Figures of Speech Q1. You fit into me like a hook into the eye. Q2. Presentiment is that long Shadow on the lawn.Q3. “Hope is the thing that has got feathers.”
That sits in the soul,
And sings the melodies devoid of words,
And never halts at all.”
Q4. Time flies like a fly, fruits flies like a mango.
Q5. Give me a hand.
The pen is mightier than the sword.
Q6. ‘Oh moon, with sad steps, you climb the skies’.
Q7. Hyperbole means exaggeration, for example, ‘My devotion to church is higher than heavens’.
Q8. Understatement/litotes means saying less than the actual, for example, ‘Atomic blast is a bit noisy’.
Q9. The paradox is a contradictory statement that makes sense on closer look, for example, ‘I am a compulsive liar’.
Q10. Oxymoron occurs when two contradictory words are in one phrase, for example, ‘sweet sorrow’.
Work Cited
Pisano, Falke, and Will Holder. Figures Of Speech. Zürich: JRP/Ringier, 2010. Print. Read More
Share:
Tags
Cite this document
(“Figures of Speech Essay Example | Topics and Well Written Essays - 250 words”, n.d.)
Figures of Speech Essay Example | Topics and Well Written Essays - 250 words. Retrieved from https://studentshare.org/english/1700264-figures-of-speech

CHECK THESE SAMPLES OF Figures of Speech

Why do language users sometimes use figures of speech

... and adequately explained. In the field of psychology, the science that deals with the evaluation of human behaviour, a series of theoretical models and approaches has been developed in regard to the use of figures of speech in daily human activities. These theories are presented in current paper aiming to explain the reasons for which language users prefer the figures of speech. The psychological and conversation analytic research frameworks are used for developing the above task. It is concluded that the use of speech is often unavoidable; however, the circumstances of their use need to be evaluated each time taking into consideration the actual social conditions but also the personal characteristics and perceptions of the language user...
10 Pages (2500 words) Essay

...? of the Religious Figures: Mahavira (Eastern Religions) and Abraham (Western Religions) People follow different religions based on their beliefs and upbringing. There are Buddhism, Islam, Jainism, Judaism, Christianity and many more. In this paper, we will discuss about Mahavira, the preacher of one of eastern religions and Abraham, the preacher of one of western religions. We will highlight the lives and teachings of the two religious figures analyzing their similarities and differences. According to the History, Lord Mahavir was the last Tirthankara of the Jain religion. As per the Jain methodology all Tirthankaras were human beings. They acquired the status of perfection / enlightenment after passing through meditation and self...
6 Pages (1500 words) Term Paper

...POSTHUMAN FIGURES: RETHINKING NOTIONS OF IVITY Introduction This paper aims to explore how posthuman figures of difference help us rethink our subjectivity through a TV programme as a reference. It shall look at how cultural identity is organised around points of difference, the idea of the body as Other, and long history of fascination with bodies that don't conform, which challenge the idea of the Enlightenment subject and exposes our cultural anxieties. It is also important to critically analyse the notion of the posthuman and the notion of the "other" in addressing these points. "The posthuman view privileges informational pattern over material instantiation, so that embodiment in a biological substrate is seen as an accident...
8 Pages (2000 words) Movie Review

... Teacher: William Shakespeare: ‘Shall I Compare Thee to a summer’s Day’ The sonnet is formulated and depicted in the traditional aspect of Shakespeare’s literature. It can be considered as the most popular lyric poem in the dialect of English. The sonnet is an illustration of the true nature of Shakespeare’s artistry and his impeccable use of words. The sonnet provides the reader with an appreciation of beauty and adoration for nature. The speaker beings the poem with a question, which is aimed at his beloved: ‘Shall I compare you to a summer’s day?’ (Art of Europe, ‘William Shakespeare: Sonnet 18’) it is the general nature of the following eleven lines of the poem, which are devoted to depicting similar comparisons... Teacher: William ...
2 Pages (500 words) Essay

...Figures of speech Introduction Special techniques are paramount in the formulation of interesting and memorable speeches. Figures of speech are essential tools that contribute to an outstanding speech. These are rhetorical forms that contribute immense significance to the speech. Profound historical speakers have capitalized on figures of speech. This technique has made their speeches survive antiquity and bear immense significance to the listeners and subsequent generations. Consequently, profound speakers like Martin Luther King Jnr are key references of ideal speeches in the recent generation. Style and outstanding clarity are major features of the profound speakers in the world’s history. The ultimate objective of the figures...
2 Pages (500 words) Essay

... technology available was the television and the radio. Today, the parents are completely closed out of the world their children live in. They are not in control of what they access on the internet. Pornographic materials have become easily accessible to the youths today. In sum, Lapham clearly explains the need to learn from the past since it is from past history that we are able to assess our lives and look for rational solutions to things that negatively our lives. He also emphasizes the need for teachers to focus on writing because it aids in students’ learning. Finally, he explains how technology has both positively and negatively affected life. Work Cited Lapham, Lewis. Figures of Speech....
2 Pages (500 words) Essay

...Human Figures in Landscapes Dr. Shakeel [Pick the The history of landscape painting is as old as the history of painting itself. And even before that, when people first started drawing in caves and through other primitive modes of art, they drew human figures, trying to recreate the creation of God as they saw themselves and the people around them. With the passage of time, both these genres of landscape and portraiture kept flourishing all over the world and a lot of artists worked on these genres in bravura of techniques and styles. Then people started amalgamating these two different genres to create a new magic in which the canvas started taking the shape of a microcosm of life and so the artists started putting human figures active...
10 Pages (2500 words) Article

Let us find you another Essay on topic Figures of Speech for FREE!