Comments (0)
Add to wishlistDelete from wishlist
Cite this document
Summary
Writing well, communicating in meaningful ways always depends on the rhetorical situation and how audience, context and purpose shape what, how and why you are communicating. Key rhetorical…
Download full paperFile format: .doc, available for editing
HIDE THIS PAPERGRAB THE BEST PAPER95.1% of users find it useful 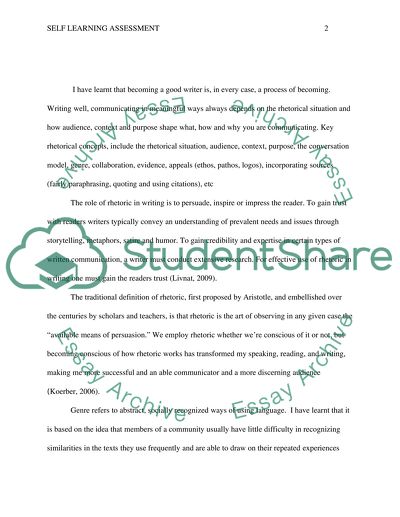 Extract of sample "Self learning assessment"

SELF LEARNING ASSESSMENT I have learnt that becoming a good is, in every case, a process of becoming. Writing well, communicating in meaningful ways always depends on the rhetorical situation and how audience, context and purpose shape what, how and why you are communicating. Key rhetorical concepts, include the rhetorical situation, audience, context, purpose, the conversation model, genre, collaboration, evidence, appeals (ethos, pathos, logos), incorporating sources (fairly paraphrasing, quoting and using citations), etc
The role of rhetoric in writing is to persuade, inspire or impress the reader. To gain trust with readers writers typically convey an understanding of prevalent needs and issues through storytelling, metaphors, satire and humor. To gain credibility and expertise in certain types of written communication, a writer must conduct extensive research. For effective use of rhetoric in writing one must gain the readers trust (Livnat, 2009).
The traditional definition of rhetoric, first proposed by Aristotle, and embellished over the centuries by scholars and teachers, is that rhetoric is the art of observing in any given case the “available means of persuasion.” We employ rhetoric whether we’re conscious of it or not, but becoming conscious of how rhetoric works has transformed my speaking, reading, and writing, making me more successful and an able communicator and a more discerning audience (Koerber, 2006).
Genre refers to abstract, socially recognized ways of using language. I have learnt that it is based on the idea that members of a community usually have little difficulty in recognizing similarities in the texts they use frequently and are able to draw on their repeated experiences with such texts to read, understand, and perhaps write them relatively easily (Judy, 2008). This is, in part, because writing is a practice based on expectations: the reader’s chances of interpreting the writer’s purpose are increased if the writer takes the trouble to anticipate what the reader might be expecting based on previous texts they have read of the same kind. While genres are seen more specifically as related to groups, they are also seen in the wider context of the activities that surround the use of texts. Thus, for Swales (1998, p. 20), genres: ‘Orchestrate verbal life. These genres link the past and the present, and so balance forces for tradition and innovation. They structure the roles of individuals within wider frameworks and further assist those individuals with the actualization of their communicative plans and purposes’.
I have also realized that instead of focusing on the process of composition, the content of texts, or the abstract prescriptions of disembodied grammars, genre has enabled me to write in my target contexts, thereby supporting me to participate effectively in the world outside the classroom (Ceccarelli, 2001).
I have also learnt that when writing any type of paper, it is important to be aware of your audience. Writers who fail to understand who their readers are have the risk of failing to reach the goals they have intended for certain papers. If written for the inappropriate audience, the author’s writing may seem unfocused or inappropriate. Therefore, it is important to provide the proper context, tone, and language suitable to the audience you are addressing. It is also important to know your audience because it will eventually help you determine how and what to write.
References
Ceccarelli, L. (2001). Manufactured Scientific Controversy: Science, Rhetoric, and Public; University of Chicago Press.
Judy, S. (2008). Health and the Rhetoric of Medicine. Carbondale: Southern Illinois University Press.
Koerber, A. (2006). From Folklore to Fact: The Rhetorical History of Breastfeeding and Immunity, 1950–1997.
Livnat, Z. (2009). The Concept of Scientific Fact: Perelman and Beyond Read More
Share:
Tags
Cite this document
(“Self learning assessment Essay Example | Topics and Well Written Essays - 500 words”, n.d.)
Retrieved from https://studentshare.org/english/1691941-self-learning-assessment

CHECK THESE SAMPLES OF Self learning assessment

...?Learning Autobiography: A Self-Assessment Introduction This autobiographical sketch is being undertaken mainly to fulfil the requirements for my application for a degree in General Business. Other than this, I also welcome the opportunity that this exercise provides, to obtain a new perspective on my life. In the course of writing this essay, aspects of my life which are relegated to the background in the course of everyday routine are recalled, and in their recollection new insights are discovered that adds meaning to the daily toil. New significance is derived from childhood events, the circumstances of early adulthood and finally the coming into life’s fullness as a parent. When the events of early life are seen through the eyes...
5 Pages(1250 words)Essay

... and Section # of Self Assessment Self assessment test actually belongs to the individual assessing of thoughts and preferences. The self assessment test shows the results that are assessed by the individual itself and involves different psychological models that help in self assessment. Thesis statement: Do people go into certain professions or occupations according to their "type" I do not agree that all the people go to specific and certain profession but I do agree that each personality chooses his/her type of profession. The test result will be according to my self assessment as I know that my result is based on strong judgement. I am extrovert who mainly depend on thinking not on feeling and thus according to my thoughts each...
2 Pages(500 words)Personal Statement

It also determines individuals about their strengths and limitations in specific areas. It acts as a reflective evaluation for one, which is beneficial in recognition and making respective changes accordingly.
1a. Through the questioner of procrastinator and deliberate decision- maker, I came across with the knowledge that I have a blended style of decision making and I have emotional stability and conscientiousness. I do not rush myself especially in rational decisions. Although, I do rush in personal matters like eating, walking and reaching on time, but I take time for decisions so I can assess the pros and cons of it. Thus, with the help of rational model I can change my habit of occasional rash decision making as well.

... Personality Assessment Who am I? This is one of the most misunderstood questions within the various discussion contexts. Whenever a person is faced with this question, answers begin streaming in from different sources and perspectives. There are numerous self-assessment tests designed to examine closely and provide intrinsic details with regards to this question. Interpersonal interactions present some of the richest grounds through which practical personal analyses are conducted. It is easy and effective to conduct an analysis on a personal motivation, attitude, and other personality traits. There are different tools and mechanisms that have been designed to not only examine a person’s character traits, but also use this information...
4 Pages(1000 words)Assignment

Domain 2 of the NMC (2008) Standards for learning and assessment in practice asks mentors to Facilitate learning for a range of students, within a particular area of practice where appropriate, encouraging self-management of learning opportunities and

... is the most important vehicle for appreciating many disagreements that are necessarily present in our efforts to settle differences. It is an uphill tussle for people to accept that conflict is inevitable and is not in most cases good or bad. Acknowledging conflicts in our lives can lead to many important lessons being learnt that can lead to growth of society and individuals. Being cognizant of this fact; however, individuals are in a dilemma of whether they should avoid or engage in conflict. From my assessment, there are five major guidelines to consider in making such critical decisions. These approaches include history of conflict, the emotions invoked, my values, structure or framework available and my interest in the conflict...
2 Pages(500 words)Admission/Application Essay

... College 09 December Self-assessment Aptitude being Manager My ability to be a manager is average. My score for conceptual and human skills are both 21 while my technical sills score was 14. I therefore need to improve in each of the aspects for better management capacity. The results suggest that I may not be an effective manager and I therefore need to improve in every management aspect before assuming a management role. Guiding Ethical Principle The results show a moderate approach orientation and are consistent with my experience. The scores were nine for justice approach, 10 for moral-rights approach, 11 for individual approach, and eight for utilitarian approach, all being moderate values. This also requires all round improvements...
2 Pages(500 words)Essay

...﻿Name Institution Course Instructor Date Self-assessment My synthesis section contributes immensely to the development of the question at issue. For example, on the first paragraph of page two, I synthesized the views of Robert Frank in his article titled Income Inequality: Too Big to Ignore. I highlighted how Frank does not believe in the achievement of the American dream by saying that “Frank places his blame on the economists for the inflation and argues that the economists have left their work for the philosophers to come up with the solution of income inequality” (Page 2, paragraph 1). The analysis of Frank’s views helped me develop my conclusion. My conclusion sums up the agreement of the three articles that the American tax systems...
1 Pages(250 words)Essay

...A Personal View of Entrepreneurship Table of Contents Table of Contents 2 Introduction 3 Characteristics of an Entrepreneur and How it Relates with Me 4 My Views of What Makes a Highly-Functioning Entrepreneurial Team, And How My Entrepreneurial Skills Fit Into Such a Team 5 How You See the Role and Impact of Entrepreneurial Activities in the Organizations in Which You Have Worked or Observed 6 Areas of Creativity, Innovation and Entrepreneurship You Wish To Develop In Yourself, And How You Plan To Do That 8 Conclusions 9 References 10 Bibliography 13 Introduction In its simplest form, ‘Entrepreneurship’ can be stated as the route of starting a new venture for profit or non-profit seeking purpose. Learning and knowing about...
7 Pages(1750 words)Essay
sponsored ads
Save Your Time for More Important Things
Let us write or edit the essay on your topic "Self learning assessment" with a personal 20% discount.
GRAB THE BEST PAPER

Let us find you another Essay on topic Self learning assessment for FREE!