Can Genetically Modified Organisms Save the World - Essay Example

Comments (0)
Add to wishlistDelete from wishlist
Cite this document
Summary
This is because the food people eat is a personal choice and everyone has their own opinion in regards to GMO foods and their nutritional value. The introduction of foods genetically modified into food…
Download full paperFile format: .doc, available for editing
HIDE THIS PAPERGRAB THE BEST PAPER92.3% of users find it useful 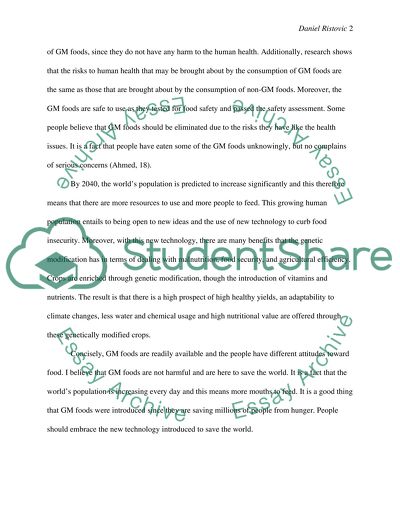 Extract of sample "Can Genetically Modified Organisms Save the World"

Daniel Ristovic Ms. Ashley Hemm English 1158 26 ‘GMO the Necessary Evil’ The discussion of whether GMO’s are a necessary evil can go on andon. This is because the food people eat is a personal choice and everyone has their own opinion in regards to GMO foods and their nutritional value. The introduction of foods genetically modified into food supplies has had varying degrees of being successful from country to country. The genetically modified foods have slowly made their way to the U.S food supply while on the other hand European nations have experienced an incredible backlash as awareness of their use grew. There have been many mixed reactions due to the GM foods due to the rampant debate surrounding the GMO technology. Today, the process of genetic modification is rapidly advancing throughout the planet. In 2004, 8.25 million farmers in 17 nations (Ahmed, 30) grew the crops. The production and marketing of GM foods are due to the superficial benefits they hold either to the producer or to consumption of these genetic foods. In the beginning, GM seeds developers needed their products to be accepted by producers and focus on innovations that have direct benefit to the farmers and the food industry at large. For example, the International Rice Research Institute located in the Philippines manufactured the GM golden rice to help people in the South East Asia that were lacking food.
GMO foods are unavoidable and we cannot live without them. The WHO, the Food, Drug Administration, and other scientific bodies in the world have strongly advocated for the use of GM foods, since they do not have any harm to the human health. Additionally, research shows that the risks to human health that may be brought about by the consumption of GM foods are the same as those that are brought about by the consumption of non-GM foods. Moreover, the GM foods are safe to use as they tested for food safety and passed the safety assessment. Some people believe that GM foods should be eliminated due to the risks they have like the health issues. It is a fact that people have eaten some of the GM foods unknowingly, but no complains of serious concerns (Ahmed, 18).
By 2040, the world’s population is predicted to increase significantly and this therefore means that there are more resources to use and more people to feed. This growing human population entails to being open to new ideas and the use of new technology to curb food insecurity. Moreover, with this new technology, there are many benefits that the genetic modification has in terms of dealing with malnutrition, food security, and agricultural efficiency. Crops are enriched through genetic modification, though the introduction of vitamins and nutrients. The result is that there is a high prospect of high healthy yields, an adaptability to climate changes, less water and chemical usage and high nutritional value are offered through these genetically modified crops.
Concisely, GM foods are readily available and the people have different attitudes toward food. I believe that GM foods are not harmful and are here to save the world. It is a fact that the world’s population is increasing every day and this means more mouths to feed. It is a good thing that GM foods were introduced since they are saving millions of people from hunger. People should embrace the new technology introduced to save the world.

Can Genetically Modified Organisms save the world?
Genetically modified foods derive from genetic materials that do not occur naturally. All GMO foods withstand the direct application of chemicals like herbicides or insecticides. Today, Genetically Modified Organic foods have their way into people’s lives and homes. The Food and Drug Administration approved the GMO seeds in the year 1982. These foods first hit the grocery stores in 1994 and since then GMO foods have rapidly increased worldwide and have a positive impact in the world.
Research shows that GMO foods survive long periods without water, fruits and vegetables stay ripe longer, they grow in a wide range of conditions, and they are disease resistant. With the increased food prices and millions struggling to get food to eat, the food security problem is becoming the world’s agenda. This is because of the increase in population that is the greatest problem in the world. GMO could be the answer to the problem since it could boost food production and prevent famines. On the other hand, many developed countries consider GMO unsafe. Countries like Japan and Australia have significant restrictions on the production and sale of GMOs (Bodiguel, 9). In addition, research shows that GMO is a great threat and can cause environmental disaster as well as violation of consumers and farmers’ rights. In conclusion, all GM foods should undergo strict inspection before getting into the market. If possible, the relevant authorities should make all GMO foods public so that consumers are aware of what they are purchasing.
Works Cited
Bodiguel, Luc. The Regulation of Genetically Modified Organisms: Comparative Approaches.
New York, N.Y.: Oxford UP, 2010. Print.
Ahmed, Farid E. Testing of Genetically Modified Organisms in Foods. New York: Food
Products, 2004. Print. Read More
Share:
Cite this document
(“Can Genetically Modified Organisms Save the World Essay”, n.d.)
Retrieved from https://studentshare.org/english/1676332-can-genetically-modified-organisms-save-the-world

(Can Genetically Modified Organisms Save the World Essay)
https://studentshare.org/english/1676332-can-genetically-modified-organisms-save-the-world.

“Can Genetically Modified Organisms Save the World Essay”, n.d. https://studentshare.org/english/1676332-can-genetically-modified-organisms-save-the-world.
Comments (0)
Click to create a comment or rate a document

CHECK THESE SAMPLES OF Can Genetically Modified Organisms Save the World

... of this research paper, which is set by the thesis statement, is to conduct an exhaustive analysis of controversial foundation and application of genetically modified organisms, thereby evaluating its implications, influences, and potential risks and benefits to society’s culture, moral values, economic, and governance, the wildlife, and environment. I. What is GMO? According to Millis (2006), genetically modified organism refers to the host species involved in DNA technology breeding; in fact, GMO is a species with which breeding cannot occur, but DNA of another species can be introduced into it to acquire a genetically modified organism. Therefore, it receives a small piece of DNA from the species donor, thereby forming a property...
9 Pages(2250 words)Research Paper

Closely related to GMOs are transgenic organisms, a subset of GEOs comprising of organisms to which DNA originating from a different has been inserted. Historical Background to GMOs Production of a GMO generally involves addition of new genetic material to the genome of an organism. This process is known as genetic engineering. Two major discoveries have contributed to the development of genetic engineering; coming up with the first recombinant bacterium in the year 1973, as well as the discovery of the DNA. This first recombinant bacterium was made from an existing bacterium E. coli was had an exogenesis Salmonella gene. The emergence of genetic engineering aroused a lot of concerns about its potential risks. These risks were fi...
6 Pages(1500 words)Essay

... can help eliminate the application of chemical pesticides and reduce the cost of bringing a crop to market.” (Park). Federici (515) validates this point by stating GM foods leads to “decreased pesticide use, increased vitamin content, increased crop yields, and that they have great potential to yield even more impressive benefits in the future.” As the world’s population continues to raise, the need for the food products also increase proportionately. On the positive side, the genetically modified crops can increase the food supply, and ease the hunger as well as malnutrition problem all over the world. “There will be approximately 1.5 billion more people in the world in the next 20 years, and what better way to keep up with agricultural...
4 Pages(1000 words)Essay

Biotechnology plays a major role in meeting human’s daily needs through resource efficiency and food security. Various things including increase in yields characterize biotechnology as well as offering built in protection against insect damage, prevention of soil erosion, and eventually reduce poverty by increasing food security for a growing population. However, biotechnology has had serious effects on both human and enhanced climatic changes. Genetically Modified Organisms are organisms whose genetic materials (DNA) are technologically altered through the process of modern biotechnology or gene technology. GMO are developed because they are perceived to be cheaper, durable and with nutritional value as well as crop protection....
6 Pages(1500 words)Research Paper

... Sub topic Page Introduction: 2 Biological Meddling: 2-3 Diplomatic and Ethical Considerations: 3-4 Prohibitive Trade Laws and Policies: 4-5 Wrong Regulatory Approach: 5-6 Failure to Adhere to Protocols: 6-7 References: 8-9 Transatlantic Dispute over GMO Regulations Introduction There has in the past been a row over the regulations of Genetically Modified Organisms (GMO) or Genetically Engineered Organisms (GEO), where different factors have been quoted by different stakeholders. The most notable of the stake holders have been United States, Canada, and Argentina, which have brought about consultations aimed at straightening the disputes, with the European Community (EU), under the auspices of the World Trade...
6 Pages(1500 words)Essay

An organism that has been subjected to such genetic manipulation is referred to as a genetically modified organism.
Genetic modification involves the altering of the DNA code in a cell that is artificially grown in a laboratory before being reinserted into the same organism or an unrelated organism. The totality of genetic information that is present within the DNA of an organism is called genome, and this information is coded in such a way that it can be understood by all other living species. According to this coding system, four nucleotides are required to provide instructions to a cell on how it is to make any protein. (Steinbrecher, 1998).
Nucleotides are DNA units whose names are listed as letters – A, C, G and T. T...
4 Pages(1000 words)Essay

...GENETICALLY MODIFIED ORGANISMS Genetically Modified Organisms Genetically modified organisms refer to organisms that have genetics whose nature has been altered through genetic engineering methods. The modification is usually done on plants and animals. These medications usually result to organisms that are of completely different nature to the traditional organisms. This paper aims at discussing the production and consumption of products with genetically modified organisms. There are a number of reasons as to why genetic modification is always carried out on plants and animals. For example, in plants genetic modification is always carried out with the aim of increasing their nutritional values and making their yield higher. As the world...
4 Pages(1000 words)Assignment

Humans have long sought to push the boundaries and experiment well outside the zones of comfort and recommendation. Such pushing of the envelope has given us the age of jet travel, space exploration, advanced science, and many other inventions and realities that we would not otherwise have. Yet, the fact remains that pushing the envelope and seeking to engage in something that is unknown is a process which only certain individuals within society have been comfortable at performing. Due to such an understanding, it becomes obvious that expecting all of society to engage in an activity that might be entirely outside of their comfort zone is neither ethical nor advantageous. This is very much the situation with regard to the use of G...
10 Pages(2500 words)Research Paper
sponsored ads
Save Your Time for More Important Things
Let us write or edit the essay on your topic "Can Genetically Modified Organisms Save the World" with a personal 20% discount.
GRAB THE BEST PAPER

Let us find you another Essay on topic Can Genetically Modified Organisms Save the World for FREE!