Engage Gladwell, Olson, and Nathan in a conversation to explain how individuals - Essay Example

Comments (0)
Add to wishlistDelete from wishlist
Cite this document
Summary
Interestingly, modern communication is relatively complex because of social sites, which aid communication. There is wide interaction that brings together people of different ethnic…
Download full paperFile format: .doc, available for editing
HIDE THIS PAPERGRAB THE BEST PAPER95% of users find it useful 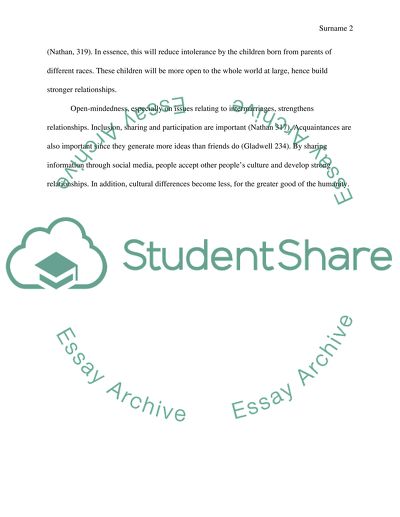 Extract of sample "Engage Gladwell, Olson, and Nathan in a conversation to explain how individuals"

Joanna Kim 356:156:32 Nor.03 Paper 3-3 Dr. Heba Relationships The need for a mature relationship is essential owing to the contemporary diversity of the world. Interestingly, modern communication is relatively complex because of social sites, which aid communication. There is wide interaction that brings together people of different ethnic communities who have different values and beliefs. Building national and international schools, encouraging intermarriages, and promoting open-mindedness are some of the reliable ways of reducing racial discrimination and ethnicity.
Integrated schools give children an opportunity to meet other children from dissimilar family backgrounds and cultures. People spend most part of their childhood, until early adulthood, in learning institutions. For that reason, it is likely that they will grow up with what they learn. This will also increase interaction with other groups and fortify relationships (Olson 339). Gladwell joins Olson through the focus on Freedom schools (Gladwell 233). On the other hand, Nathan points out those students who do not socialize benefit less from integrated schools (Nathan 321).
In the main, intermarriages bring together people of different races. Intercommunity dating is an asset rather than a liability (Olson 343). In Olson view, advantages of intermarriages outweigh disadvantages. Social interactions such as intermarriages should be encouraged (Nathan, 319). In essence, this will reduce intolerance by the children born from parents of different races. These children will be more open to the whole world at large, hence build stronger relationships.
Open-mindedness, especially on issues relating to intermarriages, strengthens relationships. Inclusion, sharing and participation are important (Nathan 317). Acquaintances are also important since they generate more ideas than friends do (Gladwell 234). By sharing information through social media, people accept other people’s culture and develop strong relationships. In addition, cultural differences become less, for the greater good of the humanity.
Works Cited
Gladwell, Malcolm. Small change
Nathan, Rebekah. Community and Diversity
Olson, Steve. The End of the Race. Read More
Share:
Tags
Cite this document
(“Engage Gladwell, Olson, and Nathan in a conversation to explain how Essay - 1”, n.d.)
Retrieved from https://studentshare.org/english/1663888-engage-gladwell-olson-and-nathan-in-a-conversation-to-explain-how-individuals

(Engage Gladwell, Olson, and Nathan in a Conversation to Explain How Essay - 1)
https://studentshare.org/english/1663888-engage-gladwell-olson-and-nathan-in-a-conversation-to-explain-how-individuals.

“Engage Gladwell, Olson, and Nathan in a Conversation to Explain How Essay - 1”, n.d. https://studentshare.org/english/1663888-engage-gladwell-olson-and-nathan-in-a-conversation-to-explain-how-individuals.
Comments (0)
Click to create a comment or rate a document

CHECK THESE SAMPLES OF Engage Gladwell, Olson, and Nathan in a conversation to explain how individuals

...Terrorism: The Unsettled Legacy of Nathan Hale While the actions of our allies may be seen as courageous and bold, the opponent will view them as atrocious acts of terrorism. It has often been said that, "One man's terrorist is another man's freedom fighter". While this is a minimum definition that seems to often fit, it reduces the vital importance and clear understanding of what a terrorist is. It is critical to understand and identify what a terrorist is and what makes up a terrorist organization. There needs to be some level of universal agreement to insure international cooperation when the war against our enemies strays beyond the conventional armies. To be able to identify a terrorist, we must be able to define the terrorist whether...
2 Pages(500 words)Essay

Furthermore, it also is not a disease that all elderly people are vulnerable too. Health research studies have shown that older people who regularly engage in an exercise program at least three times a week are less likely to get this disorder than those who have never been interactive in exercise regimens (Consumer Affairs 2006). Also, certain addictions to consumer products such as "tobacco" or even "alcohol" have been shown to make a person age faster than their actual years. For example someone who is 45 years old and who has smoked since they were 13 can show signs of cognitive break down faster than a person who is 55 years of age (Cross Currents 2004). The point is that some addictions are very bad for your health and...
6 Pages(1500 words)Essay

One of the basic agents of gender socialization is stereotype threat. With regard to influence on gender and race, all groups have got stereotype attributed to them (Rohall, Milkie and Lucas 99). Some have got more consequences. For instance, Americans may be viewed as violent, and women, mostly, may be perceived to have negative influences on mathematics and physical sciences. For such reasons, individuals are believed to be judged according to their group affiliate.
Class race and gender socialization in a family is another basic agent to socialization. Income differences will not only influence how children are brought up but also determines their social nature (Rohall, Milkie and Lucas 170). For instance, high-income earner...
3 Pages(750 words)Essay

The assessment will be undertaken on the basis of Piaget theory, Skinner’s approach to learning and respective educational philosophers credited within the sources.
The chosen scenario for this paper is about Nathan who is a gymnast. It should be noted that Nathan learnt gymnastic since his childhood. Nathan has been observed to excel in almost every exercise that he has been involved in except pommel horse. As a matter of fact, Nathan has been involved in a couple of meets where he has seen other members of the gymnasium receiving medals. Nathan has found this experience as motivating and it is for this reason that he wants to continue his practice. Since he has been having issue with pommel horse, his parents and instructor...
5 Pages(1250 words)Admission/Application Essay

Engage Gladwell, Olson, and Nathan in a conversation to explain how individuals

Consequently, many societies share a common belief, born of experience that diversity in their nationality is important for them to achieve their most important mission. Rebekah Nathan, who authored “Community and Diversity”, describes that the ineffectiveness of weak relations challenges the existence of a strong college community. “The End of Race” by Steve Olson explores the effects of intermarriages on the Hawaiian community and the universe. In “Small Change”, Malcolm Gladwell shows how civil-rights emerged and gained popularity through use of social media that fosters what he calls weak, temporary relationships. Therefore, I will elucidate on how developing integrated schools, encouraging intermarriages, participating and s...
4 Pages(1000 words)Essay

...Conversation School The conversation that I’ve recently took part in happened between me and my close friend and was engaged with discussion around a work of art in a museum. The communicative situation gave me an opportunity to observe different aspects of the speech act and my interlocutor’s behavioral patterns. The conversation started with an analysis of a piece of art. My interlocutor (Mike) was standing in front of the painting and tried to construct a consistent argumentation by pointing on the parts of the painting he was interpreting. His body language seemed constrained, because he crossed his legs and tried to protect his chest zone from time to time by crossing his hands or putting his arm on his chest. At the very beginning...
4 Pages(1000 words)Essay

Outliers by Malcolm Gladwell In his book, Gladwell challenges the common belief about outliers, ly that people called outliers are successful due to intelligence and talents they possess. He states, “It is not the brightest who succeed […] Outliers are those who have been given opportunities – and who have the strength and presence of mind to seize them.” (Gladwell 167) On a range of examples, the author analyzes the factors that actually underlie success.
The book is comprised of two parts, in which Gladwell discusses such factors as opportunity and legacy. The first part of the work is dedicated to opportunity. One of the brightest examples on how opportunities work in favor of those who get them is the one of Canadian junio...
2 Pages(500 words)Essay
sponsored ads
Save Your Time for More Important Things
Let us write or edit the essay on your topic "Engage Gladwell, Olson, and Nathan in a conversation to explain how individuals" with a personal 20% discount.
GRAB THE BEST PAPER

Let us find you another Essay on topic Engage Gladwell, Olson, and Nathan in a conversation to explain how individuals for FREE!