Comments (0)
Add to wishlistDelete from wishlist
Cite this document
Summary
In teamwork, different individuals come forward to work and make plans in order to achieve the desired common organizational goals. Every individual is different from the other with…
Download full paperFile format: .doc, available for editing
HIDE THIS PAPERGRAB THE BEST PAPER93.8% of users find it useful 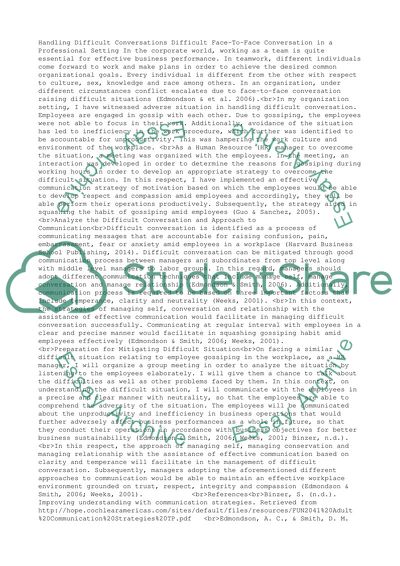 Handling Difficult Conversations Difficult Face-To-Face Conversation in a Professional Setting In the corporate world, working as a team is quite essential for effective business performance. In teamwork, different individuals come forward to work and make plans in order to achieve the desired common organizational goals. Every individual is different from the other with respect to culture, sex, knowledge and race among others. In an organization, under different circumstances conflict escalates due to face-to-face conversation raising difficult situations (Edmondson & et al. 2006).
In my organization setting, I have witnessed adverse situation in handling difficult conversation. Employees are engaged in gossip with each other. Due to gossiping, the employees were not able to focus in their work. Additionally, avoidance of the situation has led to inefficiency in the work procedure, which further was identified to be accountable for unproductivity. This was hampering the work culture and environment of the workplace.
As a Human Resource (HR) manager to overcome the situation, a meeting was organized with the employees. In the meeting, an interaction was developed in order to determine the reasons for gossiping during working hours in order to develop an appropriate strategy to overcome the difficult situation. In this respect, I have implemented an effective communication strategy of motivation based on which the employees would be able to develop respect and compassion amid employees and accordingly, they will be able perform their operations productively. Subsequently, the strategy aided in squashing the habit of gossiping amid employees (Guo & Sanchez, 2005).
Analyze the Difficult Conversation and Approach to Communication
Difficult conversation is identified as a process of communicating messages that are accountable for raising confusion, pain, embarrassment, fear or anxiety amid employees in a workplace (Harvard Business School Publishing, 2014). Difficult conversation can be mitigated through good communication process between managers and subordinates from top level along with middle level managers to labor groups. In this regard, managers should adopt different communication techniques that include manage self, manage conversation and manage relationship (Edmondson & Smith, 2006). Additionally, communication process is required to be based on three important factors that include temperance, clarity and neutrality (Weeks, 2001).
In this context, the strategies of managing self, conversation and relationship with the assistance of effective communication would facilitate in managing difficult conversation successfully. Communicating at regular interval with employees in a clear and precise manner would facilitate in squashing gossiping habit amid employees effectively (Edmondson & Smith, 2006; Weeks, 2001).
Preparation for Mitigating Difficult Situation
On facing a similar difficult situation relating to employee gossiping in the workplace, as a HR manager, I will organize a group meeting in order to analyze the situation by listening to the employees elaborately. I will give them a chance to talk about the difficulties as well as other problems faced by them. In this context, on understanding the difficult situation, I will communicate with the employees in a precise and clear manner with neutrality, so that the employees are able to comprehend the adversity of the situation. The employees will be communicated about the unproductivity and inefficiency in business operations that would further adversely affect business performances as a whole in future, so that they conduct their operations in accordance with business objectives for better business sustainability (Edmondson & Smith, 2006; Weeks, 2001; Binzer, n.d.).
In this respect, the approach of managing self, managing conservation and managing relationship with the assistance of effective communication based on clarity and temperance will facilitate in the management of difficult conversation. Subsequently, managers adopting the aforementioned different approaches to communication would be able to maintain an effective workplace environment grounded on trust, respect, integrity and compassion (Edmondson & Smith, 2006; Weeks, 2001).
References
Binzer, S. (n.d.). Improving understanding with communication strategies. Retrieved from http://hope.cochlearamericas.com/sites/default/files/resources/FUN2041%20Adult%20Communication%20Strategies%20TP.pdf
Edmondson, A. C., & Smith, D. M. (2006). Too hot to handle? How to manage relationship conflict. California Management Review, 49(1), 1-27
Guo, K. L., & Sanchez, Y. (2005). Workplace communication. Chapter 4, 77-110.
Harvard Business School Publishing. (2014). Difficult conversations: Nine common mistakes. Retrieved from http://hbr.org/web/slideshows/difficult-conversations-nine-common-mistakes/10-slide
Weeks, H. (2001). Taking stress out of stressful conversations. Harvard Business Review, 1-9. Read More
Share:
Tags
Cite this document
(“Handling Difficult Conversations Essay Example | Topics and Well Written Essays - 500 words”, n.d.)
Handling Difficult Conversations Essay Example | Topics and Well Written Essays - 500 words. Retrieved from https://studentshare.org/management/1657002-handling-difficult-conversations

...?Handling devices Roller conveyor: One of the materials handling devices found in my organization belongs to the category of transport, i.e. roller conveyor. It is used to shift goods from one place to another. The material may be moved from one workplace to another or from a dock to another. The benefit of using the roller conveyor is that no matter how heavy the load may be, it gets moved with minimal inconvenience and time as it has to be moved mechanically by rollers. No manual work is involved in it. The smallest thing to be transported has to be broad enough to cover the width of at least three rollers in order to be moved (MHE Taxonomy, 1999). I would like to reduce the diameter of the rollers so...
1 Pages(250 words)Essay

...?Conversations with History Follow Remark An interesting remark Michael Scheuer makes in the video ‘Conversations with History’ considers the nature of Osama Bin Laden’s development as a sort of anti-American force. The interviewer asks about the creation of Bin Laden and whether it was an American doing -- as in, had America imbued Bin Laden with the weapons and funding, to which were later turned on the United States – of if Bin Laden was of a Middle Eastern creation. In response, Scheuer indicates that he believes the concept that Bin Laden could be an American creation is a form of extreme American arrogance, and that instead Bin Laden developed out of a number of complex geographical and political...
2 Pages(500 words)Essay

...?Introduction War is the darkest part and saddest moment in the history of any nations. It kills many lives of both parties that participates the warand the worst is the death of civilians whose rights must have been protected against the effects of war. In the event of war between the US and Iraq, issues have to be face on the part of the US whether it is a terrorism act that killed many soldiers and civilians or either a tactic that would free the world from fright from Al Qaeda. This paper tends to let us view, analyze, and eventually react on the interview with Mr. Michael Scheuer, a former CIA official and Head of the Osama bin Laden unit at the University of California-Berkeley. Conversations with History,” A Y-Tube...
2 Pages(500 words)Essay

...? Lansing Community College MGMT 290 – Handling the Difficult Employee CRN Number E-mail Address Telephone Number Define Difficult Situations including Management’s Responsibility and Sources of Difficulties Difficult situations can arise within any organization and engulf the working domains of the people that are employed under its aegis. This happens when there is a great amount of work taking place and when employees hail from varied backgrounds. How these difficult situations are handled and what pre-emptive measures are taken to make sure that these remain at bay is something that will be the basis of this paper, and which shall...
4 Pages(1000 words)Research Paper

...? Introduction From a previous study, there has been an observation that there have been changes to English language as well as diversification over the years. There is the spreading of English language from its original geographical location to the rest of the world thus becoming a widely spoken language. In this study, there will be analysis of linguistics as well as the interpretation of this linguistics (Bolton 2012, 38-47). Conducting a conversation in English Speech and writing by English users In reference to Barbara Mayor, people give a meaning in terms of spoken English through nonverbal expressions that include facial expressions and gestures. These expressions may also include tone variation. Hence people do...
6 Pages(1500 words)Essay

.... Kowalski (2010) presents various points that are pivotal in addressing this subject. More often than not, media relations cut across most difficult, intense, yet emotionally charged conversations occurring in the public. This implies that handling correctly issues can be an opportunity towards changing the situation for the better. It is always important to take control of individual behavior, as well as emotions. This can only be achieved if right skills are used appropriately. Coming up with programs that are designed to improving communication skills and relationships can be very productive in avoiding mismanaging sensitive situations whenever they arise (Kowalski, 2010; 171)....
3 Pages(750 words)Essay

...﻿Information Handling "Management information system is essential for creating competitive firms, managing global corporations, and providing useful products and services to customers." (Laudon, 2002,P1) It provides information figure of reports and displays to managers. For example, sales managers may use their computer workstations to get sales results of their products and to access weekly sales analysis reports, and then evaluate sales made by each salesperson. "Management information systems arose in the 1970s to focus on computer-based information systems aimed at managers." (Laudon, 2002, P15). Because of the growths of the Internet, globalisations of trade, and the rise of information economies, have to improve the role... the tasks...
6 Pages(1500 words)Essay

...Market Conversations in Political Economy “Suppose that the earth yielded spontaneously all that is now produced by cultivation; still without the institution of property it could not be enjoyed; the fruit would be gathered before it was ripe, animals killed before they came to maturity; for who would protect what was not his own; or who would economize when all the stores of nature were open to him?... In this country, for instance, where the only common property consists in hedge-nuts and blackberries, how seldom are they allowed to ripen...” – Mrs. J. H. Marcet, Conversations in Political Economy, 1819 The purpose of this paper is to conduct a critique of the above passage and answer some fundamental questions in regards... of the...
4 Pages(1000 words)Essay

...LEADERSHIP STRATEGY Emotions and moods could have real consequences for getting work done. When the leader shows mild anxiety, this usually acts as a signal that there is need to focus more attention on something. A sudden flood of anger shifts the attention of the leader from the more important things. For example, if a leader hears that one of the senior executive has engaged in sexual harassment, he ends up directing all his energy from the normal concerns such as improving the normal efforts to eliminate harassment (Goleman, Boyatzis, & McKee, 2013). Several discoveries have been made in an attempt to improve leadership strategies. It has been noted that the more optimism on the top management team leads to cooperation among... STRATEGY...
1 Pages(250 words)Essay
sponsored ads
Save Your Time for More Important Things
Let us write or edit the essay on your topic "Handling Difficult Conversations" with a personal 20% discount.
GRAB THE BEST PAPER

Let us find you another Essay on topic Handling Difficult Conversations for FREE!