Comments (0)
Add to wishlistDelete from wishlist
Cite this document
Summary
The paper "People Like Us – David Brook" analyzes David Brooks essay ‘People Like Us. According to his essay, humans associate and interact with others who are similar to them. In most cases, they find it comfortable as compared to otherwise and by so doing a virtual boundary is created…
Download full paperFile format: .doc, available for editing
HIDE THIS PAPERGRAB THE BEST PAPER96.1% of users find it useful 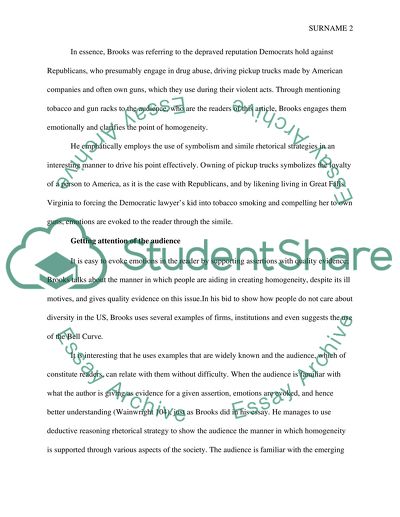 People Like Us – David Brook. Diversity in the United s has different interpretations owing to its melting pot in regards to the distinct lifestyles and cultures. David Brooks, through his essay ‘People Like Us,’ maintains that although the US is termed to be a diversified nation, homogeneity exists in certain aspects, such as the interactions across the populace (Caldwel 2-3). According to his essay, humans normally associate and interact with others who are similar to them. In most cases, they find it comfortable as compared to otherwise, and by so doing, a virtual boundary is created.
Using evidence, such as statistical findings, Brooks contends the segmentation that people create among themselves emerges in various situations on several grounds. Brooks uses various rhetorical strategies to capture the pathos of the situation, homogeneity in the US ethos, and to reinforce his sentiments to the audience that the ethnicity that once existed in the US is far from over, as it is a common belief, only that it is hidden in the present day US.
The importance of imagery in Literature
Associating the people living in a particular area with certain behaviors and practices helps in the understanding of prevailing homogeneity in the US through evoking emotions in the audience (Gohrab 23-4). In his essay, Brooks says, “if you asked a Democratic lawyer to move from her $750,000 house in Bethesda, Maryland, to a $750,000 house in Great Falls, Virginia, shed look at you as if you had just asked her to buy a pickup truck with a gun rack and to shove chewing tobacco in her kids mouth” (Brooks,132).
In essence, Brooks was referring to the depraved reputation Democrats hold against Republicans, who presumably engage in drug abuse, driving pickup trucks made by American companies and often own guns, which they use during their violent acts. Through mentioning tobacco and gun racks to the audience, who are the readers of this article, Brooks engages them emotionally and clarifies the point of homogeneity.
He emphatically employs the use of symbolism and simile rhetorical strategies in an interesting manner to drive his point effectively. Owning of pickup trucks symbolizes the loyalty of a person to America, as it is the case with Republicans, and by likening living in Great Falls, Virginia to forcing the Democratic lawyer’s kid into tobacco smoking and compelling her to own guns, emotions are evoked to the reader through the simile.
Getting attention of the audience
It is easy to evoke emotions in the reader by supporting assertions with quality evidence; Brooks talks about the manner in which people are aiding in creating homogeneity, despite its ill motives, and gives quality evidence on this issue.In his bid to show how people do not care about diversity in the US, Brooks uses several examples of firms, institutions and even suggests the use of the Bell Curve.
It is interesting that he uses examples that are widely known and the audience, which of constitute readers, can relate with them without difficulty. When the audience is familiar with what the author is giving as evidence for a given assertion, emotions are evoked, and hence better understanding (Wainwright 104), just as Brooks did in his essay. He manages to use deductive reasoning rhetorical strategy to show the audience the manner in which homogeneity is supported through various aspects of the society. The audience is familiar with the emerging trend of marketers dividing the population into clusters depending on various factors, and this reinforces the point Brooks is trying to instill.
Conclusion
In conclusion, rhetorical strategies can be useful tools when an author intends to make his narration useful to the audience. Rhetorical strategies evoke emotions in the reader, making the narration more relevant and better understood. Brooks has managed to employ symbolism, deductive reasoning, point of view and simile rhetorical strategies to show the homogeneity present in the US.
In my personal experience, people do not segment themselves due to psychological comfort or racism, given the accommodating nature of my community’s culture. The United Arab Emirates has grown to be the most diverse and multicultural society in the world, Iranians, Indians and the Pakistanis all stay together without any discomfort. For this reason, The US ought to follow suit since it is beneficial and ethical to be diverse, just like Brooks suggests.
Works Cited
Caldwel Amanda. Response to David Brooks’ “People Like Us.” 22 October 2012. Web. 12 September 2012. < http://amandacaldwellgcsu.wordpress.com/2012/10/22/response-to-david-brooks-people-like-us/> Gohrab, Ali. Metaphor and Imagery in Persian Poetry. Leiden: Brill, 2012. Print.
Wainwright, Michael. Faulkners Gambit: Chess and Literature. New York, N.Y.: Palgrave Macmillan, 2011. Print. Read More
Share:
Tags
Cite this document
(“People Like Us David Brook Essay Example | Topics and Well Written Essays - 500 words”, n.d.)
Retrieved from https://studentshare.org/english/1657015-people-like-us-david-brook

CHECK THESE SAMPLES OF People Like Us David Brook

... the ability of female faculty to perform in the sciences and the Duke University lacrosse team incident in 2006.” These sorts of incidents, in conjunction with the increasing occurrences of ethnically themed university, campus, and/or college parties, impart new energy to both the implicit and explicit challenges towards diversity, which an institution must tackle. ISU seeks to imbibe this basic theory of Diversity Crisis Model, and develops a strategic approach to foster multiculturalism through the events like Diversity Research Symposium. Conclusion ISU has identified the most important problem areas in fostering diversity. It practically believes in equal treatment and opportunity for all and supports access and accomplishment...
3 Pages(750 words)Essay

This book does an excellent job making clear something that psychologists and sociologists have likely known all along: that people are not necessarily good at objectively weighing consequences of their actions. Through all this, however, Ehrenreich ignores some of the other major components of a lot of the issues she talks about: the structure of capitalism, for instance, and also does a somewhat middling job convincing her reader that Americans actually are the optimistic people she makes them out to be. Clearly, there are many instances in American history, even recent history, in which important people underestimated the downside of actions (the invasion of Iraq, for instance, comes to mind). Furthermore, it does an excellent...
3 Pages(750 words)Essay

Ethan Watters is an American journalist cum author of many books and articles in various magazines. He has also graced many other media outlets, thus gaining popularity for his works. He is known for his articles that are featured in various magazines and newspapers like the New York Times, Spin, the San Francisco Chronicle, Details, Mother Jones among others. This could probably be attributed to the fact that America as a nation has dominated the world, and thus highly influenced the rest of the nations. This, he points out, is because the rest of the world has homogenized the mental state of everyone in the world. He acknowledges the role of Americans in the generation of therapeutic and...
4 Pages(1000 words)Admission/Application Essay

DAVID SEDARIS Us and them

... DAVID SEDARIS Us and Them The narrative “us and them” by Sedaris revolves around conformist and non-conformist of the norms. To portray this picture, David has explored his neighbors in regards to television. In his neighborhood everyone is watching the television except Mr. Tom keys family. According to him, this family is not normal, since they are behind in technology. Furthermore, Tom key is mean since he has denied his family the aspect of entertainment (Sedaris, page 5). The author seemed amused by the fact that the Tom keys do not watch television yet the other whole of the estate have television. He is also curious to know what this family does during dinner time, only to find that they practice the sense of togetherness through...
1 Pages(250 words)Essay

... like biological robots, devoid of rational thought (BBC Ethics Guide 1). While there should be some regard on their wellbeing, they are still for human usage. Some argue that animals are not conscious, and they exist to serve humans and lack morality in themselves (BBC Ethics Guide 1). It, for that reason, follows that the issue of ethics with relevance to the use of animals for food is a matter of emotion and not ethics. However, whatever the case, what individuals hold for such characters remains debatable. Another concern would be whether people should consider animals as being more intimate than fellow humans are. There are cases when some people consider pets as the most precious belongings, better than their family (Herzog 243...
5 Pages(1250 words)Essay

Despite the global financial crisis, David Jones remains firm in targeting the higher end market (Case Study, p. 381). In line with this, the relationship between market segmentation, market targetin...

...Contaminated Land Case Study: Moston Brook, Manchester and Oldham Introduction The United Kingdom’s Government policy concedes that land contamination hampers the institution of sustainable development projects. The previously industrial land has remained unused for many years, and there is a possibility for contamination to be present. Contamination of land has occurred due to many different kinds of human activity, and it is considered to be a legacy of recent industrial history (Sarsby 2004, p. 331). Contaminants appear in solid, liquid or gaseous form, and they adversely affect human beings, rivers, buildings, aquifers and abstraction wells, and the environment. Contaminated land has been defined as land that, because of its former use...
12 Pages(3000 words)Case Study

... it to fit to be army uniform37. The musicians like Madonna have used it during music festivals and nowadays, the modern singers like Justine Timberlake are still using the jacket. Conclusion The circulation of commodities in social life has justified the significance of possessions like the persons have in their daily social lives. Denim jackets, for instance, have influenced many people and societies in general. It has influenced cultures globally and many have possessed the clothing to act as the symbol of their community. The jacket has undergone fixing and branding and rebranding to suit various markets depending on their needs and curb the upcoming trends. The individual desire for objects like jackets is rewarded it with the value...
14 Pages(3500 words)Essay
sponsored ads
Save Your Time for More Important Things
Let us write or edit the essay on your topic "People Like Us David Brook" with a personal 20% discount.
GRAB THE BEST PAPER

Let us find you another Essay on topic People Like Us David Brook for FREE!