Comments (0)
Add to wishlistDelete from wishlist
Cite this document
Summary
The paper "Jane Eyre " describes that Jane the main character goes through several people and experiences that help to establish her passion. To start with, the devotion and confidence of St. John Rivers intrigue Jane virtually enough to silence the passionate spirit in her…
Download full paperFile format: .doc, available for editing
HIDE THIS PAPERGRAB THE BEST PAPER91% of users find it useful 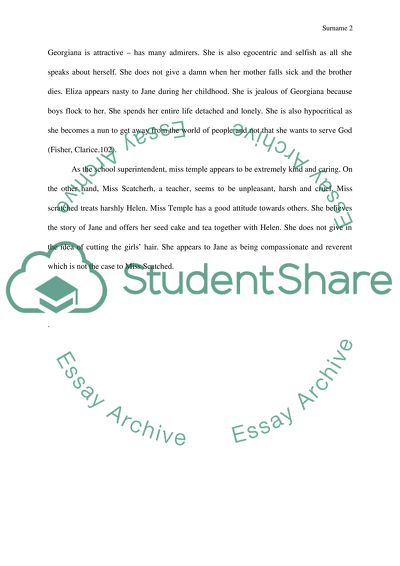 ﻿Jane Eyre
In the novel Jane Eyre, Jane the main character goes through several people and experiences that help to establish her passion. To start with, the devotion and confidence of St. John Rivers intrigue Jane virtually enough to silence the passionate spirit in her. She also adheres to the morality of Victorian woman that was dominated by the church of Anglican. The religion has no faith in passion and emotion. The instinct of Jane to assert herself stifled at her very tender age and could be expressed via defiance. It is Mrs. Reed's defiant announcement of independence that gives the power of freedom to Jane's life. In Lowood, Jane learns how to be thoughtful and patient. Rochester also introduces her to emotions of the spirit and heart. Jane seems to be restless; she is driven by passion as the power that propels her. The forces of nature and destiny hold her inner spirit. She is fond of St. John but their forces are in opposite directions. However, later she realizes that it is her nature to love and decide to follow her passionate heart (Bronte).
Mrs. Reed is a selfish and hard-hearted person. She spoils her horrible children and hates Jane her niece. She is the antagonist of the childhood of Jane and through her Jane develops hatred against injustice. She is also cruel and oppressive. Despite John Reed a child, he is a bully. He reminds Jane of her poverty and pushes her around. He is also spendthrift and extravagant. He gambles, goes to brothels, gets into debts and leaves college. He is stubborn and threatening. He threatens to hurt his mother and commit suicide. Finally, he kills himself. Georgiana is attractive – has many admirers. She is also egocentric and selfish as all she speaks about herself. She does not give a damn when her mother falls sick and the brother dies. Eliza appears nasty to Jane during her childhood. She is jealous of Georgiana because boys flock to her. She spends her entire life detached and lonely. She is also hypocritical as she becomes a nun to get away from the world of people and not that she wants to serve God (Fisher, Clarice.102).
As the school superintendent, miss temple appears to be extremely kind and caring. On the other hand, Miss Scratchers, a teacher, seems to be unpleasant, harsh and cruel. Miss scratched treats harshly Helen. Miss Temple has a good attitude towards others. She believes the story of Jane and offers her seed cake and tea together with Helen. She does not give in the idea of cutting the girls’ hair. She appears to Jane as being compassionate and reverent which is not the case to Miss Scatched.
.
Work cited
Fisher, Clarice. The Narration and Structure of Charlotte Bronte's Novels. , 1980. Print
Bronte, Charlotte. Jane Eyre Summary and Analysis. 1999. 06 05 2014. . Read More
Share:
Tags
Cite this document
(“Jane Eyre Essay Example | Topics and Well Written Essays - 250 words - 1”, n.d.)
Retrieved from https://studentshare.org/english/1644914-jane-eyre

CHECK THESE SAMPLES OF Jane Eyre

...?Is Bertha (Mr Rochester's wife) the only crazy woman in the house? In what way Jane is insane? Besides Bertha, Jane can also be considered as an insane person for reasons that can be well understood from a philosophical point of view. When somebody passionately wants to stay isolated, this is insanity. We see in Jane’s personality that she is most of the time feeling comfortable in solitude. When she comes to know about Bertha, she leaves Rochester even she was madly in love with him. Bertha can be considered as a metaphorical character representing Jane’s rage towards the society that has been controlling her and making her quiet down her emotions. In the start of the...
1 Pages(250 words)Essay

...?Analyse the role of childhood in Jane Eyre. The novel Jane Eyre tells the story of a young woman from the age of about ten until her marriage in adult life to Mr Rochester. There are two contrasting views of childhood in the book, and they are the childhood of orphaned and impoverished Jane herself, along with the children in Lowood school on the one hand and the childhood of her cousins, the Reeds, and of her own pupil, Adele, on the other hand, who all come from an upper class background. The book explores the pros and cons of growing up in both of these social classes and this is one of the main themes of the novel. This paper considers the...
4 Pages(1000 words)Coursework

...? 2 November Jane Eyre: Gender Roles Gender roles can be defined as “shared culturalexpectations that are placed on individuals on the basis of their socially de?ned gender” (Williams et al 702). The history of the world provides innumerable evidences for the undermined gender role of women and subjugation of women’s rights by men (Ifegbesa 29). Jane Eyre is one of many books that speak of violence displayed by men against women. Violence is conventionally understood as a practice that causes physical offence, whereas it actually constitutes several types of offensive behaviors that may not necessarily be physical. The definition of violence according to The UN Declaration on the Elimination of Violence Against Women is “Any act... …that...
6 Pages(1500 words)Research Paper

...? s School Jane Eyre and Social Jane Eyre is a novel written by Charlotte Bronte, which is an effort to portray various issues that an ordinary woman with considerably liberal views has to face. By depicting the story of Jane Eyre, Charlotte has created a lively and rigid character who knows where to take a stand and who sticks to her moral values no matter what. Her life, in this novel, is divided into three sections, each of which unfolds new and unexplored aspects of her life. The most apparent theme which emerges after having thoroughly analyzed the novel relates to the social class and the perils associated with those belonging to...
5 Pages(1250 words)Essay

...Jane Eyre Jane Eyre is one of a kind story about women in that Victorian Period. The main character, Jane Eyre, growing as a humble, polite, orphan girl who was always under oppression from her guardian, Mrs. Reed and school teacher, Mr. Brocklehurst, managed to become an autonomous lady. In a society where women always became oppressed and their voices could not be heard, the author, Jane Eyre, tried to bring out the plight of women by the use of the character, Bertha Mason. Jane Eyre, by using Bertha Mason, present her own plight and other women through anger, feeling...
4 Pages(1000 words)Essay

...English Literature: Jane Eyre There is genre fluidity in Charlotte Bronte’s narrative “Jane Eyre”. As we can see; the author portrayed a number of genres for instance, autobiography, romance, mystery, gothic invention and childhood to adulthood. The title of the narrative itself illustrates the autobiography genre. The narrative is about a woman called Jane Eyre yet at the same time the title is “Jane Eyre.” In my perception, Bronte does this deliberately as in a literary work; it implies some form of heroism or hero in the central narrator. The narrative is not the author’s autobiography but the...
8 Pages(2000 words)Essay

...Jane Eyre Jane Eyre tries to preserve her self-respect, independence and self-sufficiency at every stage of her life, both in struggling with socialpressure and in resisting the temptation of passion. This statement was innovation in the literally world of the 19th century. The novel "Jane Eyre" written by Charlotte Bronte greatly influences the reader and gives another vision of society and world in the whole. The novel was published in 1847. And it is a matter of fact that this novel made the author famous all over the world. The main reason for this is that this novel became an innovation in world literature. It was unusual for that...
3 Pages(750 words)Essay

...Jane Eyre Script for Jane Eyre: S ROLL OVER THE ENGLISH COUNTRYSIDE. MONTAGE OF JANE EYRE’S CHILDHOOD: *JANE as a young girl, sobbing during a funeral ceremony as a priest throws soil over her parents’ graves. She is led away by her aunt. * Jane being scolded by her aunt who seems very cross * Jane arriving at an orphanage, where she is surrounded by other young girls, especially HELEN, a young girl her age * Jane and the other girls being subjected to cruel treatment by the teachers at the orphanage * Jane’s friend Helen dying of consumption in her...
8 Pages(2000 words)Essay

2 Pages(500 words)Book Report/Review
sponsored ads
Save Your Time for More Important Things
Let us write or edit the essay on your topic "Jane Eyre" with a personal 20% discount.
GRAB THE BEST PAPER

Let us find you another Essay on topic Jane Eyre for FREE!