Comments (0)
Add to wishlistDelete from wishlist
Cite this document
Summary
Pinker is a Canadian American psychologist and writer whose initial literature aimed at scrutinizing the problems of language and language acquisition. In his essay, ‘thinking minds’, Pinker delivers one of his…
Download full paperFile format: .doc, available for editing
HIDE THIS PAPERGRAB THE BEST PAPER93.9% of users find it useful 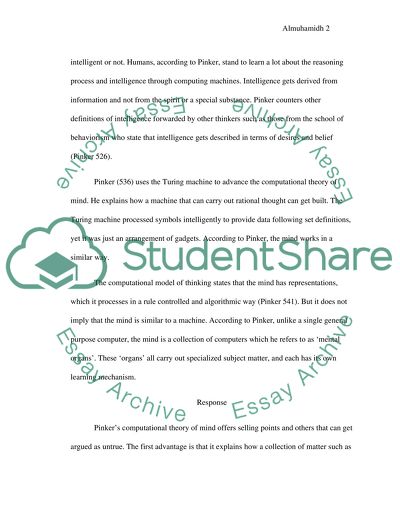 Ali Almuhamidh Chris Pyle Thinking Machine response ‘Thinking machines’ is an essay by Steven Pinker. Pinker is a Canadian American psychologist and writer whose initial literature aimed at scrutinizing the problems of language and language acquisition. In his essay, ‘thinking minds’, Pinker delivers one of his fundamental theories; the computational model of thinking (Pinker 525). In the essay, Pinker states how intelligence and rules go hand in hand. Rules provide a base to judge intelligence. He provides the explanation to the computational theory of mind by drawing comparisons of the human mind to a thinking machine. According to Pinker, the mind works in a computational manner by processing representations in an algorithmic and rule controlled manner.
Summary
Pinker notes that cognitive science has made it possible to study intelligence. It is difficult to define intelligence, but it is seeable. Intelligence is a measure of achieving goals under difficulties by undertaking sound decisions based on set rules. These set of rules provide a base for confirming or proving whether the decisions carried out are intelligent or not. Humans, according to Pinker, stand to learn a lot about the reasoning process and intelligence through computing machines. Intelligence gets derived from information and not from the spirit or a special substance. Pinker counters other definitions of intelligence forwarded by other thinkers such as those from the school of behaviorism who state that intelligence gets described in terms of desires and belief (Pinker 526).
Pinker (536) uses the Turing machine to advance the computational theory of mind. He explains how a machine that can carry out rational thought can get built. The Turing machine processed symbols intelligently to provide data following set definitions, yet it was just an arrangement of gadgets. According to Pinker, the mind works in a similar way.
The computational model of thinking states that the mind has representations, which it processes in a rule controlled and algorithmic way (Pinker 541). But it does not imply that the mind is similar to a machine. According to Pinker, unlike a single general purpose computer, the mind is a collection of computers which he refers to as ‘mental organs’. These ‘organs’ all carry out specialized subject matter, and each has its own learning mechanism.
Response
Pinker’s computational theory of mind offers selling points and others that can get argued as untrue. The first advantage is that it explains how a collection of matter such as the brain or computers can be intelligent. The theory advances the science of cognitive psychology where experimenters get to characterize the mind’s information processes and structures. The theory allows for the characterization of the mind as a biological mechanism, and not simply as a machine.
Pinker (531), defines intelligence as the ability to achieve goals in light of obstacles by undertaking decisions based on rational rules. This is a limited outlook of intelligence. It is difficult to define intelligence when an act of intelligence gets born out of an unconventional rule. For example, an act of bravery does not get based on rational rules but rather an inborn human instinct. In the event of a fire outbreak in a building, extremely few people follow the safety procedures of evacuation. Most people will react to the fire outbreak in an instinctive way to save their lives. This can also represent intelligent decision making in spite of the fact that the survivors did not follow set safety procedures. Intelligence, therefore, cannot only be defined by basing it on rules alone as suggested by Pinker.
Pinker (549) states that the brain transforms information and thinking presents a computation process. It is not right for him to separate the brain and mind processes. He distinguishes the brain from the mind by stating that the mind represents what the brain does. He believes that the mind produces the activity of the brain. This disproves common knowledge, which intimates that the brain and mind is one. The mind forms part of the brain and are not separate.
Works Cited
Pinker, Steven. "Thinking machines." Pinker, Steven. How the mind works. New York: Penguin
Books, 1997. 525-550. Print Read More
Share:
Tags
Cite this document
(“Thinking machine response Essay Example | Topics and Well Written Essays - 500 words - 1”, n.d.)
Retrieved from https://studentshare.org/english/1619331-thinking-machine-response

...? BMW: The Ultimate Driving Machine An analysis of positioning strategy of BMW Introduction The primary reason for purchasing a product is that it satisfies some need of the consumer and, as every student of marketing is aware of, there are basically two types of needs – emotional and functional. There is an upper limit to functional needs – a person cannot ride two cars simultaneously but there is no upper limit to emotional needs – a person can keep as many cars in their garage as they please. If marketers can create a distinct brand image of their offerings they would be able survive the relentless onslaught from rival brands, else they would simply fade away from this intensely competitive niche market (Ries and Trout...
6 Pages(1500 words)Essay

Is Computer a Thinking Machine

...? Is Computer a Thinking Machine? The work by Pinker ultimately claims that computer is a thinking machine. The very first point as put forward b Pinker to consider something as intelligent is to consider if it functions according to a set of rules, though the rules are beyond the understanding of humans. He substantiates his claim by providing the example of aliens. It is claimed that it does not mean that aliens are unintelligent even if humans fail to understand the meaning of their actions because the set of rules they follow may be unknown to humans. So, according to Pinker the measurement of intelligence of something is to check if it is able to function rationally...
3 Pages(750 words)Admission/Application Essay

... Machine Introduction: machine is a device in which the output depends in some systematic way on variables other than the immediate inputs to the device. These other variables are called the state variables for the machine, and depend on the history of the machine. The behavior of a state machine can be completely described by a state table or equivalently by a state diagram. State machines can be used to specify the behaviors of objects in a system by describing the relationships between the states of the object and its ability to respond to events presented to it. Suitable choice of semantics for state machines allows multiple machines to be composed in the description of a single object. State diagram can be used to graphically... ...
3 Pages(750 words)Essay

Reading Response to Thinking of Empire

...Teacher: Response to ‘Thinking about Empires’ The article is an enlightening document, which provides an outlook of how Empires are created and how power consumes individuals. It is an eye opener on the nature of power, and how people are blinded by the hunger for power. This is something that is evident in modern society today. The manner in which people seek to establish empires is self-centered and results in wars between nations and even regions. “Thinking about Empires’ highlights a major factor, greed. Power is considered as the ultimate jewel of society, as it provides control of several factors, other than human kind. The nature of power creates an addiction to rule, resulting in...
1 Pages(250 words)Essay

...machinery administration. It is additionally responsible for moving the institution to awarding two of my models at a keynote address. Machine deliverables included a clickable model, a design description article, and a research outline. Detailed data and a research summary for the scenario machine and its prototype were provided and made confidential (Proctor & Kim-Phuong 327). Functionality Functionality in the high fidelity prototype for my scenarios was closely affiliated with the form of the design by-products. This affiliation will be impartially simple to find out if it has the opportunity of operating as an actual commodity. Objects in interrelation design depend mainly on the...
4 Pages(1000 words)Essay

Response to the Critical Thinking Exercise

...Response to the Critical Thinking Exercise No previous research is available to the nurse regarding specific dressing methods. Thus,the nurse needs to test these methods. The nurse’s approach to testing her dressing technique must be based on deductive reasoning. The starting point would be to design an empirical study, from which it could be deduced whether certain methods indeed produced better results than others, based on objective, quantifiable data (Schmidt & Brown, 2012, p.15). The study would be experimental in that methods would be randomly awarded to patients. Deductive reasoning is necessary in designing the research method. Though no previous research on these specific methods is available, wound management theories... to the...
1 Pages(250 words)Research Paper

... What does it mean to write “hit-or-miss” for YOU? Writing “hit-or-miss” meant the absence of the “guiding instinct” that aveteran writer has in writing their piece. The guiding instinct meant the contemplation and due consideration for the reader as a veteran writer writes her piece. Have you written this way in the past? Why? I think every writer has experienced this stage at varying degree. When we are in the process of learning, it is inevitable that we make mistakes. After all, experience is the best teacher and learning what does not work well through experience can the best instruction that we will ever learn in writing. How do you see yourself fixing this? I took cue from what I read in this article to contemplate... the...
3 Pages(750 words)Essay

...perspective. I always find mistake this way that I missed during my initial write. Describe in your own words the Chess comparison the author uses. It only meant being fascinated without understanding how the process works because the writer did not take time to understand the correct process of good writing. What does this analogy mean to you? It meant that we do not understand the principles or process of how to write effectively. We appreciate good composition but cannot learn it because we do not exert effort to avoid the mistakes and learn the rules of good writing. Trimble explains that a beginning chess player “has no idea how seasoned players think at the board” and that they “can certainly appreciate the...
3 Pages(750 words)Essay

...﻿Machine-to-Machine Communication Disruptive technology is basically a replacement of an old technology by an innovation that creates new market value for products or services. Adoption of disruptive technology can be either risky or profitable venture. By using a technology in its early stage can enable one to establish new markets but can also become vulnerable to unforeseen risks. The key lies in choosing the correct time to enter the market (Evans, 10). Disruptive technology can change the structure of an industry by replacing traditional values with new values. It can encourage corporate planners to embark in new avenues for their organizations (Evans, 8). RFID One example of disruptive technology...
1 Pages(250 words)Essay
sponsored ads
Save Your Time for More Important Things
Let us write or edit the essay on your topic "Thinking machine response" with a personal 20% discount.
GRAB THE BEST PAPER

Let us find you another Essay on topic Thinking machine response for FREE!