Comments (0)
Add to wishlistDelete from wishlist
Cite this document
Summary
Using Bounded Input Bounded Output the system is stable since the output is bounded for every finite inputs; the system will be unable to blow up during its operation. Additionally, the transfer function poles have –ve real parts, making the system stable. The complex s-plane…
Download full paperFile format: .doc, available for editing
HIDE THIS PAPERGRAB THE BEST PAPER92.1% of users find it useful 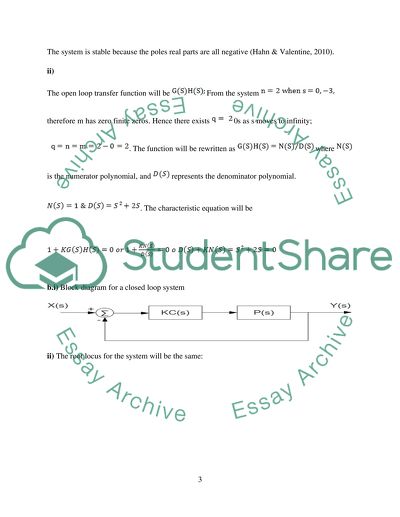 Extract of sample "Questions to solve belongs control and instrumentation"

Download file to see previous pages . The characteristic equation will be 
The critical gain of the system indicates the stability of a closed loop system developed by applying unit feedback to (Klee & Allen, 2011). The gain margin represents the increase or decrease needed to make the loop gain where the frequency is -180 degrees.
Discreet time systems are characterized by difference equations. Examples of these are economic systems where the system behavior is recognized at discrete points of periods (Liu & Wang, 2012). Conversely in the system, some of the signals are continuous while others are discreet. Some discreet time signal arises from the continuous signals via sampling. Digital computers accept signals on discreet points of period so that samplers transforms continuous time signal into discreet time signal.
i) The derivative control increases the damping of the system. The derivative term also increases the present noise which can easily cause instability. Assuming the functions of closed transfer are outlined as shown,
The integral affects the gain of low frequency and alters the frequency where proportional factor becomes more effective. It would be best to raise KI, but when it gets higher a more negative stage is introduces in the range at a place where the servo bandwidth results. This lowers the phase margin of servo, causing ringing and overshoots. As shown below
Ziegler Nichols and Modified Ziegler Nichols are tuning methods for PID. Ziegler Nichols uses the procedures of selecting proportional controls alone, increases the proportional gain until instability is attained. In addition, it measures the oscillation period to come up with critical time constant. For certain control loops the oscillation measure, offered by ¼ decay ratios and their large overshoots for point alterations are not desired therefore, the modified Z-N is used (Olsson, 2002).
The Z-N method does not give the final solution when compared to the ...Download file to see next pagesRead More
Share:
Tags
Cite this document
(“Questions to solve belongs control and instrumentation Coursework”, n.d.)
Questions to solve belongs control and instrumentation Coursework. Retrieved from https://studentshare.org/engineering-and-construction/1626180-questions-to-solve-belongs-control-and-instrumentation

“Questions to Solve Belongs Control and Instrumentation Coursework”, n.d. https://studentshare.org/engineering-and-construction/1626180-questions-to-solve-belongs-control-and-instrumentation.
Comments (0)
Click to create a comment or rate a document

CHECK THESE SAMPLES OF Questions to solve belongs control and instrumentation

...Session hijacking can be mitigated by making changes to the server – client credential process. Describe one of the methods. Session hijacking canbe conducted in means of turning the source-routine off. In this scenario, the attacker is allowed to have access at point A on the network. If source-routing is turned off, the hacker can use "blind" hijacking, where it manipulates two machines in order to guess to take over the control. Hence, the hacker can send a command, but can never see the response. However, setting permanent password from the hacker’s standpoint can be very huge vulnerability. 2) The user is a critical part of phishing prevention. What are two elements that might give away an attempt to pose as a...
3 Pages(750 words)Assignment

...K.S.Preeti, ID 21824 Order Number: 256963 Instrumentation Systems 6th December 2008 Instrumentation Systems & Signal Conditioning Introduction to Instrument Systems: An instrumentation system is an aggregation or assembly of devices united by some form of regular interaction or interdependence. It is a group of diverse units or devices so combined to form an integral whole and to function, operate or move in unison, and often in obedience to some form of control. (Sawhney 1521) The various components of a typical process control instrumentation system include process, sensors or transducers, signal conditioners, transmitters, receivers and display. In recent times, this entire loop has been computerised, initiating the need... of...
4 Pages(1000 words)Essay

...of magnetic field being applied. The distance between the sensor and the magnetic source is the main determinant of the output voltage [3]. Vacuum failure and vacuum bag leaks can be detected with the use of the sensor [3]. This sensor is primarily used in the quality control departments and cure cycle [3] of the factories producing different material which need a reliable sensor. Most of the times, the sensor is paired with a monitoring device to demonstrate the readings. For the purpose of online monitoring and compaction of a curing composite, the sensor is quite successful. This device is being used in the quality control departments and the manufacturing departments of many businesses. They ensure...
6 Pages(1500 words)Lab Report

...Instrumentation and Control Question a) Answer A graph of output at 200C (mV) versus input mass(Kg). Static transfer function refers to the ratio of system output in steady state to system input in steady state and describes the input-output relationship when the input and output are not changing. Therefore taking an input mass of 5Kg with an output of 14.34mV, Therefore static sensitivity = (b) Answer Non-linearity refers to the deviation from the linear relationship between the input and output values. Between 0 to 1 Kg output changes by 3.5mV, Between 1 to 2 Kg output changes by...
8 Pages(2000 words)Speech or Presentation

...INSTRUMENTATION Affiliation INSTRUMENTATION Instruments are the devices that are used in the measurement under study. It provides for the data dispensation, testing and designing of the outcomes (Vogt, 2006). Hence, for our research we decided to use questionnaires that were presented to all the sales consultants selected and the managers. Since the sample size was relatively high, the criterion proved to be more appropriate both in cost and effectiveness. And to make our research more predictive, we had predictive devices that help us to find out other unrestricted responses that the participants were not willing to provide to us. For purposes of accuracy, we carried out reliability and...
1 Pages(250 words)Assignment
sponsored ads
Save Your Time for More Important Things
Let us write or edit the coursework on your topic "Questions to solve belongs control and instrumentation" with a personal 20% discount.
GRAB THE BEST PAPER

Let us find you another Coursework on topic Questions to solve belongs control and instrumentation for FREE!