If I were the president of the United States - Assignment Example

Comments (0)
Add to wishlist Delete from wishlist
Cite this document
Summary
With such high number of units, understaffing becomes the greater challenge for the department. Several options exist in solving the issues with the main problem being the…
Download full paper File format: .doc, available for editing
HIDE THIS PAPERGRAB THE BEST PAPER97.3% of users find it useful 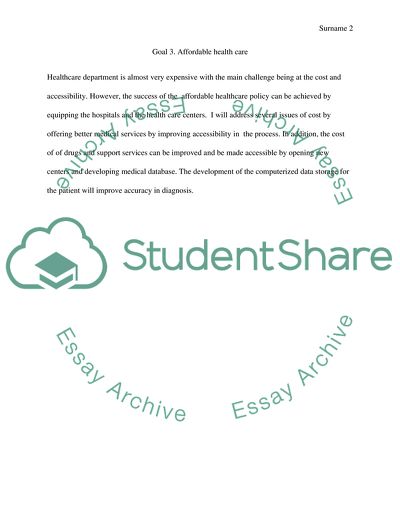 Goal Healthcare staffing policies in veteran department The department of Veteran Affairs manages close to 126 community based outpatient clinic and 152 hospitals. With such high number of units, understaffing becomes the greater challenge for the department. Several options exist in solving the issues with the main problem being the making of the decision on using veterans or volunteers in the solving of the labor deficit. The policy will address staffing issues in the veteran healthcare. The employment of veterans will also be solved in the process through the employing of veterans with health care educational background leading to the bringing in of experience and reducing the number of veterans depending exclusively on the government for support. Additionally, by working together with the volunteers, the veterans will be understood and be better appreciated in the society by eradicating negativity associated with the veterans.
Goal 2. Affordable education
Education has become very expensive especially higher education which is vital in the success of manpower development . The development of policies targeting the less privileged in the society which changes the society and improves the accessibility of education. However, challenges will exist in the funding process because of the increasing demand for educational support.
Goal 3. Affordable health care
Healthcare department is almost very expensive with the main challenge being at the cost and accessibility. However, the success of the affordable healthcare policy can be achieved by equipping the hospitals and the health care centers. I will address several issues of cost by offering better medical services by improving accessibility in the process. In addition, the cost of of drugs and support services can be improved and be made accessible by opening new centers and developing medical database. The development of the computerized data storage for the patient will improve accuracy in diagnosis. Read More
Share:
Tags
Cite this document
(“If I were the president of the United States Assignment”, n.d.)
If I were the president of the United States Assignment. Retrieved from https://studentshare.org/education/1621000-if-i-were-the-president-of-the-united-states

“If I Were the President of the United States Assignment”, n.d. https://studentshare.org/education/1621000-if-i-were-the-president-of-the-united-states.
Comments (0)
Click to create a comment or rate a document

iPhone became one of the most discussed new technology products, surpassing the wider coverage of other very well-known mobile phones that have been playing the best roles in the market. When Apple CEO Steve Jobs stood on the stage at the Macworld Expo in San Francisco and announced “We’re going to make some history together; Today Apple is going to reinvent the phone” (Jobs 2007), it could really influence...
8 Pages (2000 words) Case Study

Liberal Democracy in the United Kingdom

Lest authority tantamount to a tyranny of the majority, liberal democracies safeguard toleration of differing perspectives and the rights of individuals and minorities; in fact, the enterprise of this democratic form rests on liberty and rights. While individual ends are plural, rights are guaranteed through constitutional (or institutional) provisions and if there is a conflict between rights and ends, the former retains preponderance. Liberal democracies emphasise the rule of law – i.e. equality before the law and due process – and individual liberties such the freedom of speech, association, private property and religious practice. These safeguards ensure that tendencies towards despotism can be checked while mainta...
6 Pages (1500 words) Coursework

President Clinton addressed an audience comprising clergymen and ministers. The buildup to this event was much hyped as the earlier statement made by the President before the independent Ken Starr counsel on August 17, 1998, was charged with perjury and deliberate obfuscation of truth. Moreover, the earlier speech did not mention Monica Lewinsky and her family – a form of non-renouncing apology, which is a rhetorical ploy to generalize one’s actions, in a bid to justify one’s wrongdoing in a noncommittal manner. Such an approach diminishes the graveness of the action for which an entire nation was ashamed of, not to mention the tremendous social and psychological damage it did to Monica Lewinsky and her family.
sponsored ads
Save Your Time for More Important Things
Let us write or edit the assignment on your topic "If I were the president of the United States" with a personal 20% discount.
GRAB THE BEST PAPER

Let us find you another Assignment on topic If I were the president of the United States for FREE!