Comments (0)
Add to wishlistDelete from wishlist
Cite this document
Summary
This essay declares that the authors stated that their aim was to evaluate the effects of physical activity through the classroom-based program on the academic performance, physical fitness, classroom behavior and the noted health outcomes of elementary students…
Download full paperFile format: .doc, available for editing
HIDE THIS PAPERGRAB THE BEST PAPER97.5% of users find it useful 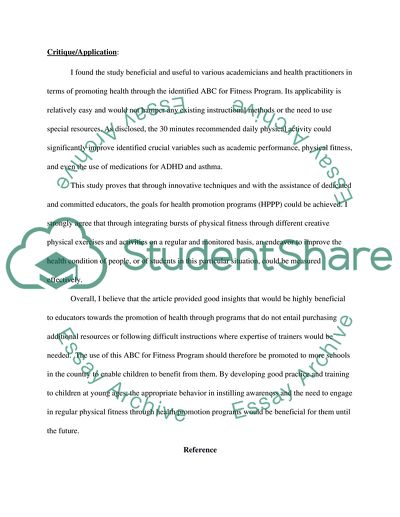 ﻿
Citation:
Katz, D., Cushman, D., Reynolds, J., Valentine, N., Treu, J., Walker, J., et al. (2010). Putting
Physical Activity Where It Fits in the School Day: Preliminary Results of the ABC (Activity Bursts in the Classroom) for Fitness Program. Preventing Chronic Disease: Public Health Research, Practice and Policy, Vol. 7, No. 4, 1-10.
Summary:
The authors stated that their aim was to evaluate the effects of physical activity through classroom-based program on the academic performance, physical fitness, classroom behavior and the noted health outcomes of elementary students from the Independence School District (ISD) located at Independence, Missouri. There were a total of 1,216 students from grades 2 through 4 who were identified to have participated in the study; but two students apparently dropped from the study due to lack of parental consent . The intervention that was applied was the ABC (Activity Bursts in the Classroom) for Fitness, which was reported to incorporated brief bursts of activity in the classroom setting throughout the day at the discretion of the teacher.
The results indicated that the proposed intervention, the ABC for Fitness Program, was effective in improving academic performance, physical fitness, reduce medication use, and even preserve teaching time. As disclosed, there were limitations in terms of the population not being an effective representative of the cross-section of the children; the use of a relatively small sample size; and virtually limited intervention and follow-up periods. Overall, the study provided relevant insights on the feasibility of classroom-based fitness program without impairment of academic instruction.
Critique/Application:
I found the study beneficial and useful to various academicians and health practitioners in terms of promoting health through the identified ABC for Fitness Program. Its applicability is relatively easy and would not hamper any existing instructional methods or the need to use special resources. As disclosed, the 30 minutes recommended daily physical activity could significantly improve identified crucial variables such as academic performance, physical fitness, and even the use of medications for ADHD and asthma.
This study proves that through innovative techniques and with the assistance of dedicated and committed educators, the goals for health promotion programs (HPPP) could be achieved. I strongly agree that through integrating bursts of physical fitness through different creative physical exercises and activities on a regular and monitored basis, an endeavor to improve the health condition of people, or of students in this particular situation, could be measured effectively.
Overall, I believe that the article provided good insights that would be highly beneficial to educators towards the promotion of health through programs that do not entail purchasing additional resources or following difficult instructions where expertise of trainers would be needed. The use of this ABC for Fitness Program should therefore be promoted to more schools in the country to enable children to benefit from them. By developing good practice and training to children at young ages, the appropriate behavior in instilling awareness and the need to engage in regular physical fitness through health promotion programs would be beneficial for them until the future.
Reference Read More
Share:
Tags
Cite this document
(“Putting Physical Activity Where It Fits in the School Day Essay”, n.d.)
Putting Physical Activity Where It Fits in the School Day Essay. Retrieved from https://studentshare.org/education/1601316-journal-2

“Putting Physical Activity Where It Fits in the School Day Essay”, n.d. https://studentshare.org/education/1601316-journal-2.
Comments (0)
Click to create a comment or rate a document

Soon a retail industry was built up and the community began to grow and is considered to be a society with a civic nature (Learning Communities in Education and Training, 2009). The community of Broken Hill can be considered to be highly diverse with a census that was conducted in the area in 1996 showed that out of the then population there were 961 people who came from overseas and a large amount of those was not from an English speaking nation. The large composition of the population in the community at the time was aboriginals or Torres Strait Islanders. Broken Hill thus shows a varying ethnic community and a diverse mindset considering a large proportion of the people are from nations such as Greece, Malta and even Italy (Lea...
6 Pages(1500 words)Case Study
sponsored ads
Save Your Time for More Important Things
Let us write or edit the essay on your topic "Putting Physical Activity Where It Fits in the School Day" with a personal 20% discount.
GRAB THE BEST PAPER

Let us find you another Essay on topic Putting Physical Activity Where It Fits in the School Day for FREE!