Comments (0)
Add to wishlistDelete from wishlist
Cite this document
Summary
Assessment is the act of finding certain information about an infant or a young child in order to make some decisions about her life and or education. There are a number of varieties of evaluation that can be made on children or infants. These measures consist of testing. In…
Download full paperFile format: .doc, available for editing
HIDE THIS PAPERGRAB THE BEST PAPER93.2% of users find it useful 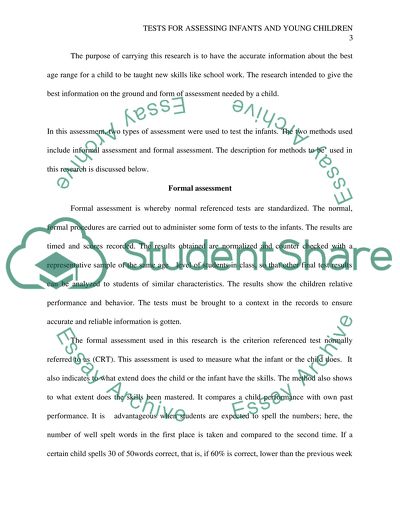 Extract of sample "Tests for assessing infants and young children"

Download file to see previous pages This score is intended to give the person assessing the child the clue about the child behaviors or capacity of knowledge tested.
The assessment of infants can take a wide range of area. This area can be a child reasoning capacity which is mainly depicted, through the child’s ability to answer the aptitude tests. In this research paper, the children were assessed to their capacity on thinking and acting on different situations (intelligence). Their intelligence here is tested to verify their ability to act or behave under different circumstances.
The age group in this research was children between the ages of two to five years (2-5). This Age group was chosen because the children here can be able to think and act accordingly when under some problem or situation. These children also are in the age bracket whereby one expects to see normal behaviors.
The purpose of carrying this research is to have the accurate information about the best age range for a child to be taught new skills like school work. The research intended to give the best information on the ground and form of assessment needed by a child.
In this assessment, two types of assessment were used to test the infants. The two methods used include informal assessment and formal assessment. The description for methods to be’ used in this research is discussed below.
Formal assessment is whereby normal referenced tests are standardized. The normal, formal procedures are carried out to administer some form of tests to the infants. The results are timed and scores recorded. The results obtained are normalized and counter checked with a representative sample of the same age level of students in class, so that other final test results can be analyzed to students of similar characteristics. The results show the children relative performance and behavior. The tests must be brought to a context in the records to ensure accurate and reliable information is gotten.
The formal assessment ...Download file to see next pagesRead More
Share:
Tags
Cite this document
(“Tests for assessing infants and young children Research Paper”, n.d.)
Retrieved from https://studentshare.org/education/1591158-tests-for-assessing-infants-and-young-children

CHECK THESE SAMPLES OF Tests for assessing infants and young children

Bad Habits of Young Teenagers in the UK

Among many families in the United Kingdom, one family over two consumes alcohol, or smoke or even are into drugs which definitely have an impact over the child. However, only parents’ influence does not limit to the contribution of the teenager have such habits, but also to there is peer pressure, television advertisements and they want to try something new that always crop into the mind of the child and managing in persuading him to make use of these products.

Smoking can be classified as a cigarette, seed leaves smoking and many other diverse products that have adverse effects on the health of a person. Cigarette smoking among teens has been on a sharp increase recently and it was initially triggered for reasons...
6 Pages(1500 words)Essay

“Autistic spectrum disorders share a triad of impaired social interaction, communication, and imagination, associated with a rigid, repetitive pattern of behavior” (Wing, 1996). I strongly believe that social interaction skills also get affected due to autism, which creates many problems for children. In my op...
6 Pages(1500 words)Coursework

The decentralized form of the homeschooling populace limits the ability of researchers to outline conclusions on the precise effect of homeschooling on diverse outcome measures like an academic achievement (Ray). Nevertheless, assessments of homeschooled children have claimed that these students do well in that educational environment. In addition, a survey of homeschooled adults implies that homeschooling ushers in positive outcomes such as improved college enrollment and attendance.
Historically, homeschooling has been a key means for parents to offer education to their children. Most of the Founding Fathers of America went through this form of education, including Thomas Jefferson and George Washington (Coulson 120). With...
11 Pages(2750 words)Case Study
sponsored ads
Save Your Time for More Important Things
Let us write or edit the research paper on your topic "Tests for assessing infants and young children" with a personal 20% discount.
GRAB THE BEST PAPER

Let us find you another Research Paper on topic Tests for assessing infants and young children for FREE!