Comments (0)
Add to wishlistDelete from wishlist
Cite this document
Summary
And the decision of the Board of Education of New Hyde Park (New York) to make use of the Regents Prayer and directed to be said this prayer aloud in every classroom before starting…
Download full paperFile format: .doc, available for editing
HIDE THIS PAPERGRAB THE BEST PAPER92.4% of users find it useful 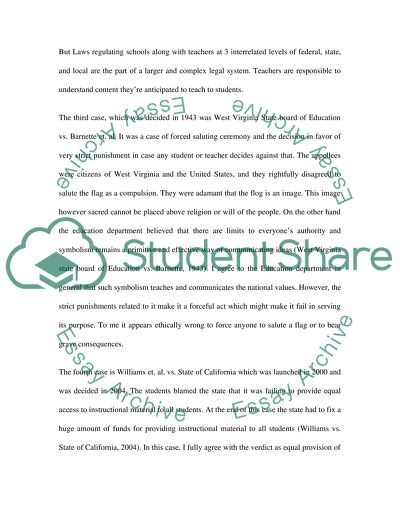 Extract of sample "Governance and Effecting Change in Schools"

Discussion on four cases: First case discussion is based on the official status of short prayer for recitation in schools. And the decision of the Board of Education of New Hyde Park (New York) to make use of the Regents Prayer and directed to be said this prayer aloud in every classroom before starting the studies.
Only Justice Potter Stewart as an opponent of Justice Hugo L. Black and Justice William O. Douglas finish off this discussion by stating the following words that "the Court has misapplied a great constitutional principle." That shows for him, an official religion means "establishment of religion” (Morgan, 1962). But one must know that laws only can regulate the rights as well as responsibilities of teachers. I disagree with this court decision as the constitution and supreme law of this country is not in favor of forced actions.
According to second case, the U.S. Supreme Court in 1963 banned the Lords Prayer plus Bible reading in the public schools.
Teachers ordered their learners to rise and deliver the verses respectfully in unanimity. Moreover, broadcasting class learners in the Abington School District were bound to read the verses over a public-address system. Otherwise, teachers could be fired if they would refuse to participate and pupils occasionally were separated out from others if they did not stick together with others students in the daily reading (Phelps and Lehman, 2005).
But Laws regulating schools along with teachers at 3 interrelated levels of federal, state, and local are the part of a larger and complex legal system. Teachers are responsible to understand content they’re anticipated to teach to students.
The third case, which was decided in 1943 was West Virginia State board of Education vs. Barnette et. al. It was a case of forced saluting ceremony and the decision in favor of very strict punishment in case any student or teacher decides against that. The appellees were citizens of West Virginia and the United States, and they rightfully disagreed to salute the flag as a compulsion. They were adamant that the flog is an image. This image however sacred cannot be placed above religion or will of the people. On the other hand the education department believed that there are limits to everyone’s authority and symbolism remains a primitive and effective way of communicating ideas (West Virginia state board of Education vs. Barnette, 1943). I agree to the Education department in general that such symbolism teaches and communicates the national values. However, the strict punishments related to it make it a forceful act which might make it fail in serving its purpose. To me it appears ethically wrong to force anyone to salute a flag or to bear grave consequences.
The fourth case is Williams et. al. vs. State of California which was launched in 2000 and was decided in 2004. The students blamed the state that it was failing to provide equal access to instructional material to all students. At the end of this case the state had to fix a huge amount of funds for providing instructional material to all students (Williams vs. State of California, 2004). In this case, I fully agree with the verdict as equal provision of instructional material can only ensure similar level or education in all parts of the state and the country.
References:
Morgan, Richard E. "Engel v. Vitale 370 U.S. 421 (1962)." Encyclopedia of the American Constitution. Ed. Leonard W. Levy and Kenneth L. Karst. 2nd ed. Vol. 2. Detroit: Macmillan Reference USA, 2000. 896. Gale Power Search. Web. 3 Aug. 2011.
Document URL http://go.galegroup.com.ezproxy.apollolibrary.com/ps/i.do?
&id=GALE%7CCX3425000844&v=2.1&u=uphoenix⁢=r&p=GPS&sw=w
"Abington School District v. Schempp." Wests Encyclopedia of American Law. Ed. Shirelle Phelps and Jeffrey Lehman. 2nd ed. Vol. 1. Detroit: Gale, 2005. 8-10. Gale Power Search. Web. 3 Aug. 2011.
Document URL http://go.galegroup.com.ezproxy.apollolibrary.com/ps/i.do?
&id=GALE%7CCX3437700026&v=2.1&u=uphoenix⁢=r&p=GPS&sw=w
Eliezer Williams, et al., vs. State of California, et al. (2004) Retrieved from
http://www.cde.ca.gov/eo/ce/wc/wmslawsuit.asp
West Virginia State board of Education vs. Barnette, 319 U.S. 624. (1943) Retrieved from http://caselaw.lp.findlaw.com/scripts/getcase.pl?court=us&vol=319&invol=624 Read More
Share:
Tags
Cite this document
(“Governance and Effecting Change in Schools Essay”, n.d.)
Governance and Effecting Change in Schools Essay. Retrieved from https://studentshare.org/education/1578722-governance-and-effecting-change-in-schools

“Governance and Effecting Change in Schools Essay”, n.d. https://studentshare.org/education/1578722-governance-and-effecting-change-in-schools.
Comments (0)
Click to create a comment or rate a document

CHECK THESE SAMPLES OF Governance and Effecting Change in Schools

But here this paper instead of filling its contents with intentional verbosity, our approach is quite goal-oriented. In addition, many of these research areas are further convoluted with links and interactions to other, nor-related research that need to be considered. Finally, the lack of accurate measurability severely hampers the statistical assessment of suitability of a stated hypothesis. But this paper is rather unconventional and attempts to dig out the actual problems and stumbling blocks that hamper the process of change management in our institutions. While above-mentioned factor pertaining to the lack of accurate measurability is true for the entire field of education, it is particularly acute in researches directly rel...
16 Pages(4000 words)Essay

As a result, there is considerable debate over whether world economies will gravitate toward adopting a common Anglo-American corporate governance structure or will...

84 Pages(21000 words)Dissertation
sponsored ads
Save Your Time for More Important Things
Let us write or edit the essay on your topic "Governance and Effecting Change in Schools" with a personal 20% discount.
GRAB THE BEST PAPER

Let us find you another Essay on topic Governance and Effecting Change in Schools for FREE!