Comments (0)
Add to wishlistDelete from wishlist
Cite this document
Summary
The essay “Human Papillomavirus” discusses the issue wherein the Journal of the American Medical Association, or JAMA, seven colleagues led by Eileen F. Dunne, M.D., M.P.H., came together to publish a study on the subject of Human Papillomavirus or HPV…
Download full paperFile format: .doc, available for editing
HIDE THIS PAPERGRAB THE BEST PAPER92.4% of users find it useful 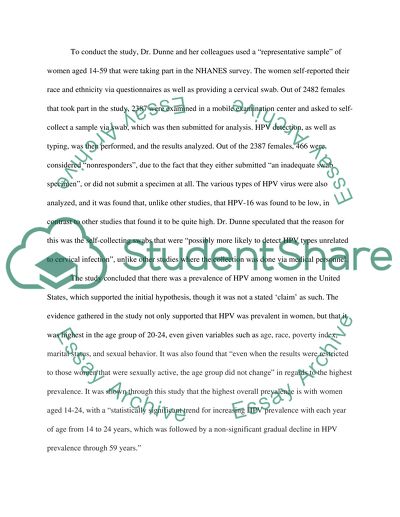 Were these seven colleagues qualified to do so? Indeed they were, by virtue of profession and training. As listed in the article, six out of the seven that conducted the study not only held the title of Ph.D. or M.D., but also were employed by the Centers for Disease Control and Prevention (CDC), which not only supported their work but also conducted the larger survey of which the study was a part of, the National Health and Nutrition Survey (NAHANES). All seven worked together to gather, collate, and sort the data, with Dr. Eileen F. Dunne taking the lead role, as well as responsibility for the data that supported their conclusions.
Dr. Dunne and her colleagues made no claims about the HPV virus, though they did claim that baseline data would be effective in measuring the prevalence of the disease. Their main concern was that such data did not exist, and therefore in the future, there would be nothing to measure the actual reduction of the HPV virus in women against, had they been given the vaccine.
To conduct the study, Dr. Dunne and her colleagues used a “representative sample” of women aged 14-59 that were taking part in the NHANES survey. The women self-reported their race and ethnicity via questionnaires as well as providing a cervical swab. Out of 2482 females that took part in the study, 2387 were examined in a mobile examination center and asked for self-collect a sample via swab, which was then submitted for analysis. HPV detection, as well as typing, was then performed, and the results analyzed. Out of the 2387 females, 466 were considered “non-responders”, due to the fact that they either submitted “an inadequate swab specimen”, or did not submit a specimen at all. The various types of HPV viruses were also analyzed, and it was found that, unlike other studies, that HPV-16 was found to be low, in contrast to other studies that found it to be quite high. Dr. Dunne speculated that the reason for this was the self-collecting swabs that were “possibly more likely to detect HPV types unrelated to cervical infection”, unlike other studies where the collection was done via medical personnel.
The study concluded that there was a prevalence of HPV among women in the United States, which supported the initial hypothesis, though it was not a stated ‘claim’ as such. The evidence gathered in the study not only supported that HPV was prevalent in women, but that it was highest in the age group of 20-24, even given variables such as age, race, poverty index, marital status, and sexual behavior. It was also found that “even when the results were restricted to those women that were sexually active, the age group did not change” in regards to the highest prevalence. It was shown through this study that the highest overall prevalence is with women aged 14-24, with a “statistically significant trend for increasing HPV prevalence with each year of age from 14 to 24 years, which was followed by a non-significant gradual decline in HPV prevalence through 59 years.”
Dr. Dunne performed a groundbreaking study to determine a baseline result that was not previously in evidence. It can be hoped by all that these results will aid in further research of HPV and build upon the methods of prevention in use today. Read More
Share:
Tags
Cite this document
(Human Papillomavirus Essay Example | Topics and Well Written Essays - 736 words, n.d.)
Human Papillomavirus Essay Example | Topics and Well Written Essays - 736 words. Retrieved from https://studentshare.org/education/1568993-hpv-critical-analysis
(Human Papillomavirus Essay Example | Topics and Well Written Essays - 736 Words)
Human Papillomavirus Essay Example | Topics and Well Written Essays - 736 Words. https://studentshare.org/education/1568993-hpv-critical-analysis.
“Human Papillomavirus Essay Example | Topics and Well Written Essays - 736 Words”, n.d. https://studentshare.org/education/1568993-hpv-critical-analysis.
Comments (0)
Click to create a comment or rate a document

CHECK THESE SAMPLES OF Human Papillomavirus

The Optional Protocol and Article 38 of the Convention on the Rights of the Child were necessitated by the fact that children participate in conflicts directly by b...
10 Pages(2500 words)Term Paper
sponsored ads
Save Your Time for More Important Things
Let us write or edit the essay on your topic "Human Papillomavirus" with a personal 20% discount.
GRAB THE BEST PAPER

Let us find you another Essay on topic Human Papillomavirus for FREE!