Comments (0)
Add to wishlistDelete from wishlist
Cite this document
Summary
This paper deems to discuss the statement that many students expand their view of the world during their time in college. Such growth often results from encounters between students who have lived different cultural, economic, or academic experiences…
Download full paperFile format: .doc, available for editing
HIDE THIS PAPERGRAB THE BEST PAPER97.3% of users find it useful 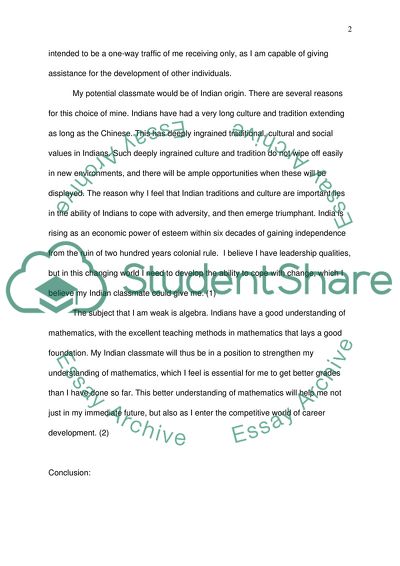 Many expand their view of the world during their time in college. Such growth often results from encounters between who have lived different cultural, economic, or academic experiences. With your future growth in mind, describe a potential classmate that you believe you could learn from either within or outside a formal classroom environment”
Introduction:
From my previous academic experience I find the above statement true. The extent of growth however, depends on the diversity among the students and faculty. I have had the good fortune of studying in an environment that encourages diversity in nationalities of their students and faculty. I believe this good fortune will follow me in future educational plans. This would enable me to continue to expand my view of the world, and would be enhanced by the availability of suitable classmates.
My Potential Classmate:
I was born in Macao, and hail from a Chinese background. This has influenced my viewing of the world with a Chinese perspective. Over the time that I have spent in the United States of America, I have broadened my vision of the world through interaction with students from different cultural and economic backgrounds, and with different academic capabilities. It is this experience that I believe will stand me in good stead in my choice of a good classmate to assist me in the development of myself as a person, and my knowledge and skills. I also believe that this is not intended to be a one-way traffic of me receiving only, as I am capable of giving assistance for the development of other individuals.
My potential classmate would be of Indian origin. There are several reasons for this choice of mine. Indians have had a very long culture and tradition extending as long as the Chinese. This has deeply ingrained traditional, cultural and social values in Indians. Such deeply ingrained culture and tradition do not wipe off easily in new environments, and there will be ample opportunities when these will be displayed. The reason why I feel that Indian traditions and culture are important lies in the ability of Indians to cope with adversity, and then emerge triumphant. India is rising as an economic power of esteem within six decades of gaining independence from the ruin of two hundred years colonial rule. I believe I have leadership qualities, but in this changing world I need to develop the ability to cope with change, which I believe my Indian classmate could give me. (1)
The subject that I am weak is algebra. Indians have a good understanding of mathematics, with the excellent teaching methods in mathematics that lays a good foundation. My Indian classmate will thus be in a position to strengthen my understanding of mathematics, which I feel is essential for me to get better grades than I have done so far. This better understanding of mathematics will help me not just in my immediate future, but also as I enter the competitive world of career development. (2)
Conclusion:
I have chosen a potential classmate that enhances my vision of the different aspects of the world, and also makes it possible for me to develop myself to cope with the challenges that I am likely to face during my academic tenure within the institution, and also the challenges that I will face along the road to fulfill my ambitions.
Works Cited
1. Berden, M. Carla. Contemporary Indian Tradition: Voices on the Culture, Nature, and the Challenge of Change. Washington: Smithsonian Institution Press, 1989.
2. Ferrari, Justine. “Our maths teaching below India’s”. AUSTRALIAN IT. 2007. 5 Feb. 2007. . Read More
Share:
Tags
Cite this document
(“Extent of Growth Depends on the Diversity Among the Students and Essay”, n.d.)
Extent of Growth Depends on the Diversity Among the Students and Essay. Retrieved from https://studentshare.org/education/1539190-admission-essay

“Extent of Growth Depends on the Diversity Among the Students and Essay”, n.d. https://studentshare.org/education/1539190-admission-essay.
Comments (0)
Click to create a comment or rate a document

..., Robert T., 1995) Subsequently, diversity management strategies may emphasize on disparities among communal groups in a business, polarize assemblages and create arguments in the place of work. (GOLEMBIEWSKI, Robert T., 1995) Thirdly, diversity management schemes may perhaps defy organizational ethnicity, which frequently might be supposed to prohibit or restrict occasions for definite sorting of workers for instance, females, racial minorities or the physically challenged to get sophisticated designations. (GOLEMBIEWSKI, Robert T., 1995) Lastly, it may be complicated to attain diversity in the organizations in nations with extensive paucity where the mainstream of the inhabitants not have adequate access to healthcare and education...
6 Pages(1500 words)Case Study

Nutrition is pivotal for growth and progression of normal life and also a disease-free life. It is imperative for everybody and much more important in the case of children and infants because they are in their maximum growth stage. Malnutrition at this stage can have serious repercussions for the...
10 Pages(2500 words)Coursework
sponsored ads
Save Your Time for More Important Things
Let us write or edit the essay on your topic "Extent of Growth Depends on the Diversity Among the Students and Faculty" with a personal 20% discount.
GRAB THE BEST PAPER

Let us find you another Essay on topic Extent of Growth Depends on the Diversity Among the Students and Faculty for FREE!