Comments (0)
Add to wishlistDelete from wishlist
Cite this document
Summary
An author of this essay "Difficulties Children face Transitioning into Post-Secondary Environments" will describe the importance of the post-secondary education along with discussing the factors in the environment which can lead to the necessity of such education…
Download full paperFile format: .doc, available for editing
HIDE THIS PAPERGRAB THE BEST PAPER96.6% of users find it useful 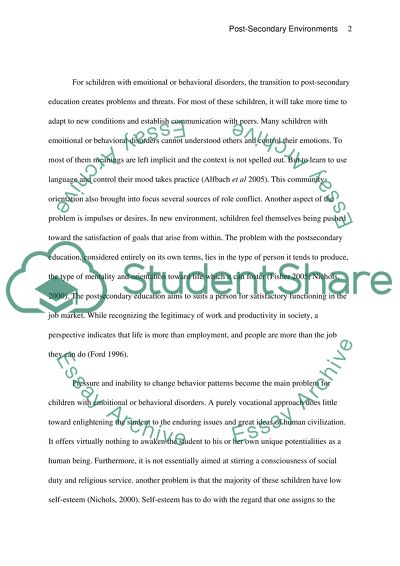 ﻿
Difficulties Children face Transitioning into Post-Secondary Environments
For schildren with emoitional or behavioral disorders, the transition to post-secondary education creates problems and threats. For most of these schildren, it will take more time to adapt to new conditions and establish communication with peers. Many schildren with emoitional or behavioral disorders cannot understood others and control their emotions. To most of them meanings are left implicit and the context is not spelled out. But to learn to use language and control their mood takes practice (Alfbach et al 2005). This community orientation also brought into focus several sources of role conflict. Another aspect of the problem is impulses or desires. In new environment, schildren feel themselves being pushed toward the satisfaction of goals that arise from within. The problem with the postsecondary education, considered entirely on its own terms, lies in the type of person it tends to produce, the type of mentality and orientation toward life which it can foster (Fisher 2005; Nichols, 2000). The postsecondary education aims to suits a person for satisfactory functioning in the job market. While recognizing the legitimacy of work and productivity in society, a perspective indicates that life is more than employment, and people are more than the job they can do (Ford 1996).
Pressure and inability to change behavior patterns become the main problem for children with emoitional or behavioral disorders. A purely vocational approach does little toward enlightening the student to the enduring issues and great ideas of human civilization. It offers virtually nothing to awaken the student to his or her own unique potentialities as a human being. Furthermore, it is not essentially aimed at stirring a consciousness of social duty and religious service. another problem is that the majority of these schildren have low self-esteem (Nichols, 2000). Self-esteem has to do with the regard that one assigns to the attributes that comprise the self-concept. Self-esteem has to do with prizing oneself, and valuing (in the sense of worthiness) oneself. Self-esteem can be high or low: one can have a high or low opinion of himself. High and low self-esteem relates closely to good and bad self-concept (Christian, 2002).
Lack of support and guidance from adults is also a problem for some schildren with emotional and behavior disorders. The focus is on the thing that he interacts with, and not on all that is going on in the world as the evening news defines it. The post-secondary eduenviornment is becoming more and more an experience in alienation (Nichols, 2000). The second added element over simple self-awareness allows the critically aware individual to clearly understand, it is another judgment) both what is "out there"--his world-and "in here"--inside himself--and gives him insight into how these two worlds interrelate (Nichols, 2000). The critically aware individual is "on to" how the external environment influences him, as well as how his existence and activities have an impact on this outer context. Each of the children has a reciprocal relationship with world; they shape it, and it shapes them. To be critically aware, therefore, is to know how that process of exchange operates in their lives (Kyriacon, 1997).
In sum, postsecondary environment puts pressure on children with emotional and behavior distress and makes it difficult to adapt to new social conditions. In many ways this list looks consistent with problem-solving and decision-making strategies that are typically employed.. For one thing, having a clear aim or goal is not enough in this environment. Its appropriateness and moral rightness needs to be assessed. To be a goal in this conception, Also, a goal means more than simply a good idea or something possible to do. the postsecondary environment hides many threats for children with emotional and behavior disorders as they cannot cope with pressure and new communication patterns, find new friends and exist without traditional support from their peers and guardians.
References
Alfbach, Ph. G. Berdahl, R. G. Gumport, P. J. (2005). American Higher Education in
The Twenty-First Century: Social, Political, and Economic Challenges. The Johns Hopkins University Press; 2nd edition.
Christian, K. W. (2002). our Own Worst Enemy: Breaking the Habit of Adult
Underachievement. Harper; 1 edition.
Fisher, R. (2005). Teaching Children to Think Second Edition. Nelson Thornes; 2Rev
Ed edition.
Ford, D. Y. (1996), Reversing Underachievement Among Gifted Black Schildren:
Promising Practices and Programs (Education and Psychology of the Gifted Series). Teachers College Press.
Kyriacon, Ch. (1997), Effective Teaching in Schools - Theory and Practice Second
Edition: Theory and Practice. Nelson Thornes; 2Rev Ed edition.
Nichols, P. (2000). Role of Cognition and Affect in a Functional Behavioral Analysis. Exceptional Children, 66 (1), 43. Read More
Share:
Tags
Cite this document
(“Difficulties Children face Transitioning into Post-Secondary Essay”, n.d.)
Difficulties Children face Transitioning into Post-Secondary Essay. Retrieved from https://studentshare.org/education/1531188-difficulties-children-face-transitioning-into-post-secondary-environments

The decentralized form of the homeschooling populace limits the ability of researchers to outline conclusions on the precise effect of homeschooling on diverse outcome measures like an academic achievement (Ray). Nevertheless, assessments of homeschooled children have claimed that these students do well in that educational environment. In addition, a survey of homeschooled adults implies that homeschooling ushers in positive outcomes such as improved college enrollment and attendance.
Historically, homeschooling has been a key means for parents to offer education to their children. Most of the Founding Fathers of America went through this form of education, including Thomas Jefferson and George Washington (Coulson 120). With...
11 Pages(2750 words)Case Study
sponsored ads
Save Your Time for More Important Things
Let us write or edit the essay on your topic "Difficulties Children face Transitioning into Post-Secondary Environments" with a personal 20% discount.
GRAB THE BEST PAPER

Let us find you another Essay on topic Difficulties Children face Transitioning into Post-Secondary Environments for FREE!