Comments (0)
Add to wishlistDelete from wishlist
Cite this document
Summary
The essay "Texas Is the First State To Approve Modified Test " describes that the letter  stated the approval of the Texas’ alternate assessment based on alternate academic achievement standards (TAKS-Alt) and Texas’ alternate assessment based on modified academic achievement standards (TAKS-M) in reading/language arts, mathematics, and science under Title I…
Download full paperFile format: .doc, available for editing
HIDE THIS PAPERGRAB THE BEST PAPER96.1% of users find it useful 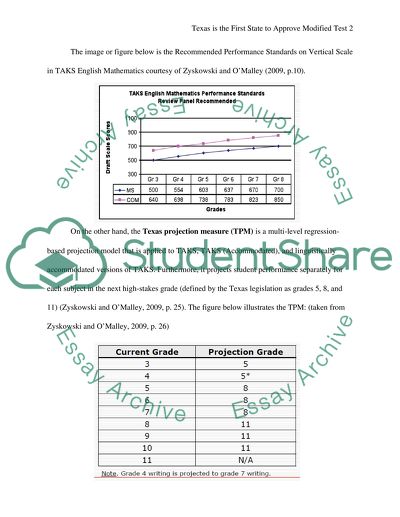 “Texas Is the First State To Approve Modified Test Essay”, n.d. https://studentshare.org/education/1525505-texas-is-the-first-state-to-approve-modified-test.
Comments (0)
Click to create a comment or rate a document

Questions
1. What are the names of the people who represent you in the Texas House and Texas Senate?
The Texas Senate is represented by Senator Rodney Ellis while the Texas House is represented by Representative Alma A. Allen.
2. (a) Select a bill to research that was authored by either your Texas state senator or your Texas state representative in the last legislative session.
(b) What is the number of the bill? Who is its author?
Texas House Representative Alma Allen together with Nash, Torres, Shelton, Patrick and Diane co-authored the House Bill 359 in the previous legislative sessions.
3. Click on the bill number and you will be taken to a page that includes links to detailed information about...

... OF TEXAS ECONOMIC DEVELOPMENT PLAN Teacher’s Today’s Class and Period Assignment State of Texas Economic Development Plan In 1999 Blake and Bradley conducted a study to reveal which states showed overall economic development and also established the factors that were consistent to these states; which included business retention, human skill development and infrastructure building (Blakeley and Green 57). The factors highlighted by Blake and Bradley are evaluated with respect to the economic development in the state of Texas. Business Retention Business success of a state or district reflects upon its economic potential; business retention as compared to setting up new businesses is an economic development strategy...
1 Pages(250 words)Essay

Texas Admission Essay My goal in life has always been to serve those in need and to contribute toward the alleviation of human suffering. This goal has often made me think a lot about what I can do to help people in need. After a lot of research, soul searching, and meditation, I have become convinced that I have a calling toward nursing. My bias toward helping people, especially children, in need by being a nurse has been reinforced by some of the stories that my mother, a registered nurse, has told me about what nurses do and how it feels to save a life. It is because of my calling to be a nurse that I have chosen to major in Pre-Nursing and Pre-Interdisciplinary Studies - Elementary Education.
After completing the pre-nurs...
1 Pages(250 words)Admission/Application Essay

The realistic effect of the test is that a judge will heed substantiation from experts in the suitable speciality and should decide whether the measures of the doctor/midwife/nurse etc. were appropriate. Frequently there are numerous acceptable ways of doing somewhat and conformity with any of these will mean that there was no breach of duty of care. Logically experts frequently disagree over these matters and the judge should decide whose substantiation is to be favored.
Professional men and women are administrated by the standard of care of a normal person of their profession or specialism: the test is the standard of the normal skilled man exercising and admitting to having that special skill. An expansion of this is the s...
10 Pages(2500 words)Coursework

The free market concept is mainly a theoretical concept as every country, even capitalist ones place some restrictions on the ownership and exchange of commodities (Free market economy). Therefore, the term free-market economy primarily means a system where the buyers and sellers are solely responsible for the choices they make. It gives the buyers and sellers the power to do business without being afraid of any regulations and intervention by the state. Hence, a free market gives the absolute power to prices to determine the allocation and distribution of goods and services (Free Market Economy). The pricing mechanism is in turn, driven by the forces of demand and supply of goods and services. Demand and supply of...
9 Pages(2250 words)Case Study
sponsored ads
Save Your Time for More Important Things
Let us write or edit the essay on your topic "Texas Is the First State To Approve Modified Test" with a personal 20% discount.
GRAB THE BEST PAPER

Let us find you another Essay on topic Texas Is the First State To Approve Modified Test for FREE!