Comments (0)
Add to wishlistDelete from wishlist
Cite this document
Summary
Art therapy has for long been a subject of close research as it is now known to be one of the main means of developing communicative skills in children, especially those who have suffered psychological trauma. In this work I am going to analyze how art therapy influences children, and especially drawing…
Download full paperFile format: .doc, available for editing
HIDE THIS PAPERGRAB THE BEST PAPER97.9% of users find it useful 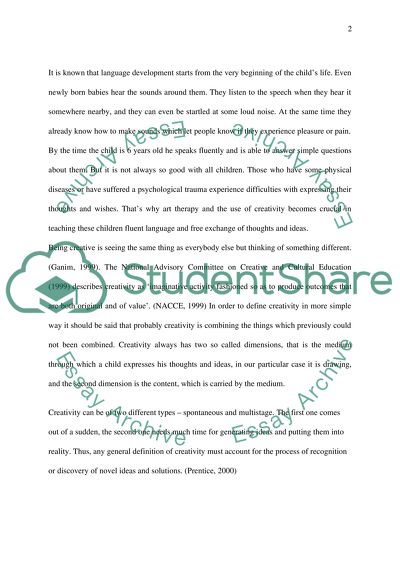 Download file to see previous pages It is known that language development starts from the very beginning of the child's life. Even newly born babies hear the sounds around them. They listen to the speech when they hear it somewhere nearby, and they can even be startled at some loud noise. At the same time they already know how to make sounds which let people know if they experience pleasure or pain.
By the time the child is 6 years old he speaks fluently and is able to answer simple questions about them. But it is not always so good with all children. Those who have some physical diseases or have suffered a psychological trauma experience difficulties with expressing their thoughts and wishes. That's why art therapy and the use of creativity becomes crucial in teaching these children fluent language and free exchange of thoughts and ideas.
Being creative is seeing the same thing as everybody else but thinking of something different. (Ganim, 1999). The National Advisory Committee on Creative and Cultural Education (1999) describes creativity as 'imaginative activity fashioned so as to produce outcomes that are both original and of value'. (NACCE, 1999) In order to define creativity in more simple way it should be said that probably creativity is combining the things which previously could not been combined. Creativity always has two so called dimensions, that is the medium through which a child expresses his thoughts and ideas, in our particular case it is drawing, and the second dimension is the content, which is carried by the medium.
Creativity can be of two different types - spontaneous and multistage. The first one comes out of a sudden, the second one needs much time for generating ideas and putting them into reality. Thus, any general definition of creativity must account for the process of recognition or discovery of novel ideas and solutions. (Prentice, 2000)
Examples of personal traits of individuals, who are considered to be creative, were described by Rhyammar (1999) - openness to experience, independence, and self-confidence.
But there is no one single definition of creativity with which everyone could agree. Any definition must note that creativity is a process of discovery and development of new ideas.
Early psychological studies of children's drawings strived to find some connection between them and the development of children's cognition. Some workers consider that there could be found some parallels between the development of child's drawing and the evolution of art through the history. On the one hand Zierer (1976) states, that there is a clear connection between the evolution of children's cognitive abilities and the evolution of art and the historical development of art was followed by the cognitive development of children. On the other hand Neboschik (1975) does not see such connection and confirms that the changes in art are the consequence of the child's which to follow the culture by which he is surrounded.
One thing remains without any change: children have a very good possibility to express their feelings and thoughts through such a simple meaning as drawing. Children therapists often use such kind of art therapy in order to help children to put ...Download file to see next pagesRead More
Share:
Tags
Cite this document
(“Art Therapy and Childs Communication Essay Example | Topics and Well Written Essays - 3000 words”, n.d.)
Art Therapy and Childs Communication Essay Example | Topics and Well Written Essays - 3000 words. Retrieved from https://studentshare.org/education/1505051-art-therapy-and-childs-communication

CHECK THESE SAMPLES OF Art Therapy and Childs Communication

The etiology of OA is multi factorial, with inflammatory, metabolic, and mechanical causes. A number of environmental risk factors, such as obesity, occupation, and tr...
11 Pages(2750 words)Literature review

Communication is part of everyday life. It is not limited to adults or learned individuals. Babies communicate with their mothers as they cry when they are hungry, the mute use sign language to express what they want to say, while the mentally disabled laugh when they are happy or excited. The forms of communication people use may vary but common elements are usually present. These include the message and the communicators or the participants who play the role of either the sender or receiver of the message. In the communication situation, I had with my friend, these common features were present along with others namely, feedback, noise, context, and mutual agreement/negotiation. These elements affected the outcome of the conversa...
12 Pages(3000 words)Case Study
sponsored ads
Save Your Time for More Important Things
Let us write or edit the essay on your topic "Art Therapy and Childs Communication" with a personal 20% discount.
GRAB THE BEST PAPER

Let us find you another Essay on topic Art Therapy and Childs Communication for FREE!