Comments (1)
Add to wishlistDelete from wishlist
Cite this document
Summary
The following paper investigates the impact of the ADHD on an academic performance. The case study considers Alice, a ten-year-old girl who has ADHD and experiences considerable learning difficulties and problems establishing friendships as the result of this disorder…
Download full paperFile format: .doc, available for editing
HIDE THIS PAPERGRAB THE BEST PAPER96.1% of users find it useful 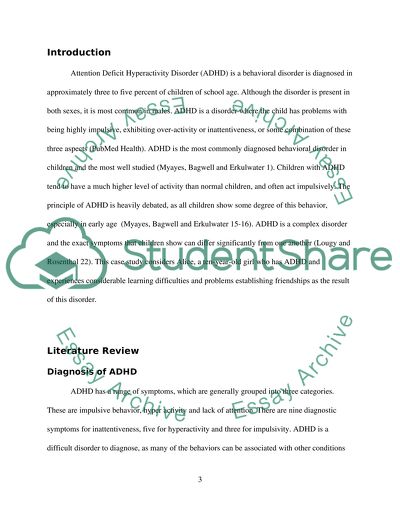 Download file to see previous pages Although the disorder is present in both sexes, it is most common in males. ADHD is a disorder where the child has problems with being highly impulsive, exhibiting over-activity or inattentiveness, or some combination of these three aspects (PubMed Health). ADHD is the most commonly diagnosed behavioral disorder in children and the most well studied (Myayes, Bagwell and Erkulwater 1). Children with ADHD tend to have a much higher level of activity than normal children and often act impulsively. The principle of ADHD is heavily debated, as all children show some degree of this behavior, especially in early age (Myayes, Bagwell and Erkulwater 15-16). ADHD is a complex disorder and the exact symptoms that children show can differ significantly from one another (Lougy and Rosenthal 22). This case study considers Alice, a ten-year-old girl who has ADHD and experiences considerable learning difficulties and problems establishing friendships as the result of this disorder. Literature Review Diagnosis of ADHD ADHD has a range of symptoms, which are generally grouped into three categories. These are impulsive behavior, hyperactivity, and lack of attention. There are nine diagnostic symptoms for inattentiveness, five for hyperactivity and three for impulsivity. ADHD is a difficult disorder to diagnose, as many of the behaviors can be associated with other conditions as well as normal behaviors that occur as part of childhood. The complexity of the symptoms means that there are many children who are incorrectly diagnosed with ADHD, and others who have ADHD but have not been diagnosed. One of the difficulties in diagnosing ADHD is that the symptoms are only evident at some points in time, most commonly during school hours. A child with ADHD generally does not show the symptoms during a physician’s visit, and so other people must be the source of this information (Myayes, Bagwell and Erkulwater 5). In fact, children are often first diagnosed with ADHD when they enter school because many of the behaviors associated with ADHD do not appear to be abnormal without the increased demands on attention, sitting still and following a direction that is present in the school environment (Lougy and Rosenthal 22). In addition, ADHD often co-occurs with other disorders, and some of the behavioral symptoms that are part of ADHD also occur as part of other disorders (Myayes, Bagwell and Erkulwater 20).To assist in diagnosis; the American Academy of Pediatrics recommends the following guidelines. That child has at least six symptoms from either impulsivity and hyperactivity, or six from the attention category, some of which began prior to seven years of age. ...Download file to see next pagesRead More
Share:
Tags
Cite this document
(“Attention Deficit Hyperactivity Disorder and Learning Research Paper”, n.d.)
Attention Deficit Hyperactivity Disorder and Learning Research Paper. Retrieved from https://studentshare.org/education/1400531-adhd
(Attention Deficit Hyperactivity Disorder and Learning Research Paper)
Attention Deficit Hyperactivity Disorder and Learning Research Paper. https://studentshare.org/education/1400531-adhd.
“Attention Deficit Hyperactivity Disorder and Learning Research Paper”, n.d. https://studentshare.org/education/1400531-adhd.
Comments (1)
Click to create a comment or rate a document

br
brookehegmann added comment 7 months ago
Student rated this paper as
The topic of "Attention Deficit Hyperactivity Disorder and Learning" is quite popular among the tasks in high school. Still, this document opens a brand new perspective of seeing the question. I’ll use the manner for my own research.

CHECK THESE SAMPLES OF Attention Deficit Hyperactivity Disorder and Learning

An organization can go through a structural change. This can be due to a takeover or a complete change of management. In this type of change, the way of working and many dimensions of business activity is altered. This move is usually towards modernization and staying up with the pace but is too fast and sudden, and thus hard for the stakeholders to adjust with. Then there is a change brought about by the change in the services or goods produced and provided. This is usually a positive ch...
6 Pages(1500 words)Article
sponsored ads
Save Your Time for More Important Things
Let us write or edit the research paper on your topic "Attention Deficit Hyperactivity Disorder and Learning" with a personal 20% discount.
GRAB THE BEST PAPER

Let us find you another Research Paper on topic Attention Deficit Hyperactivity Disorder and Learning for FREE!