Putting The Bully In His Place. Causes, Consequences and Possible Solutions to Bullying - Term Paper Example

Comments (1)
Add to wishlistDelete from wishlist
Cite this document
Summary
Fitzpatrick and Bussey (2011) explain that bullying is a form of aggression that has become a prevalent problem in society. It affects up to one third of children in school (Due, Holstein & Soc, 2008). …
Download full paperFile format: .doc, available for editing
HIDE THIS PAPERGRAB THE BEST PAPER97.5% of users find it useful 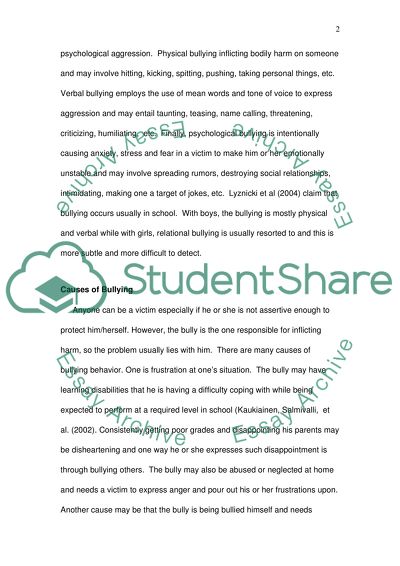 Extract of sample "Putting The Bully In His Place. Causes, Consequences and Possible Solutions to Bullying"

Download file to see previous pages Bullying involves the infliction of harm on a less powerful person by a more powerful individual or group by way of physical, verbal or psychological means. It is a growing problem in schools that threaten to cause long-term negative effects that victims and bullies may be burdened with all their lives (Hawker & Boulton, 2000).
This paper endeavors to study the causes, consequences and possible interventions for bullying behaviors in schools. It is the researcher’s attempt to contribute solutions to this common issue in schools that is shared by many, but not addressed enough, hence the bullying cycle continues.
Definition of Bullying
Olweus (cited in Nansel, Haynie & Simons-Morton, 2003) defines bullying as aggressive peer-to-peer behavior with three conditions, namely: an intention to harm or disturb the victim; the aggression is done repeatedly and there is an imbalance of power between the bully and the victim. Ayenibiowo & Akinbode (2011) identified three forms of bullying as physical, verbal and psychological aggression. Physical bullying inflicting bodily harm on someone and may involve hitting, kicking, spitting, pushing, taking personal things, etc. Verbal bullying employs the use of mean words and tone of voice to express aggression and may entail taunting, teasing, name calling, threatening, criticizing, humiliating, etc.etc. Finally, psychological bullying is intentionally causing anxiety, stress and fear in a victim to make him or her emotionally unstable and may involve spreading rumors, destroying social relationships, intimidating, making one a target of jokes, etc. Lyznicki et al (2004) claim that bullying occurs usually in school. With boys, the bullying is mostly physical and verbal while with girls, relational bullying is usually resorted to and this is more subtle and more difficult to detect. Causes of Bullying Anyone can be a victim especially if he or she is not assertive enough to protect him/herself. However, the bully is the one responsible for inflicting harm, so the problem usually lies with him. There are many causes of bullying behavior. One is frustration at one’s situation. The bully may have learning disabilities that he is having a difficulty coping with while being expected to perform at a required level in school (Kaukiainen, Salmivalli, et al. (2002). Consistently getting poor grades and disappointing his parents may be disheartening and one way he or she expresses such disappointment is through bullying others. The bully may also be abused or neglected at home and needs a victim to express anger and pour out his or her frustrations upon. Another cause may be that the bully is being bullied himself and needs someone to bully around just to maintain the status quo (Esplage, Holt & Henkel, 2003). This way, he or she may feel that power has been regained even though in reality, he or she still feels powerless with the person who bullies him or her. The child may also have a poor or no role model who can guide him to appropriate behavior (Fekkes, Pijpers & Verloove-Vanhorick, 2005). The bullying behavior may also have been learnt from someone who has been a bad influence to him (Turner, 1991). Although in theory, hurting others is known to be an inappropriate but in practice he or she sees people of authority practicing bullying, he or she then imitates it in his or her own life. Finally, the bully may have a conduct disorder which is the precursor to antisocial, psychopathic or personality disorder (Bullying in Schools, n.d.). Ayenibiowo & Akinbode (2011) explain one theory that stimulates ...Download file to see next pagesRead More
Share:
Tags
Cite this document
(“Putting The Bully In His Place. Causes, Consequences and Possible Term Paper”, n.d.)
Retrieved de https://studentshare.org/education/1395007-putting-the-bully-in-his-place-causes-consequences-and-possible-solutions-to-bullying

(Putting The Bully In His Place. Causes, Consequences and Possible Term Paper)
https://studentshare.org/education/1395007-putting-the-bully-in-his-place-causes-consequences-and-possible-solutions-to-bullying.

“Putting The Bully In His Place. Causes, Consequences and Possible Term Paper”, n.d. https://studentshare.org/education/1395007-putting-the-bully-in-his-place-causes-consequences-and-possible-solutions-to-bullying.
Comments (1)
Click to create a comment or rate a document

le
leopoldmayer added comment 1 year ago
Student rated this paper as
The topic of "Putting The Bully In His Place. Causes, Consequences and Possible Solutions to Bullying." was hard to find. I spent countless hours to find it. Here at StudentShare, I got the finest example. Many thanks!

CHECK THESE SAMPLES OF Putting The Bully In His Place. Causes, Consequences and Possible Solutions to Bullying

Napoleon’s strategic styles and unique approach of governance have been used in different ways by rulers across the world not only to keep the civilians of their respective nations under their control but at the same time, his strategic approaches proved to be sources of great inspiration for all those leaders who wished to receive an upper hand over the existing governing systems of other nations. It has always been a matter of great surprise for diplomats, politicians and strategy makers across the world to date that how within such a short period of time and at such a small age he has been able to receive such a huge rate of success. The same note of surprise and respect has explicitly been reflected Georges Lefebvre&rsqu...
11 Pages(2750 words)Article
sponsored ads
Save Your Time for More Important Things
Let us write or edit the term paper on your topic "Putting The Bully In His Place. Causes, Consequences and Possible Solutions to Bullying" with a personal 20% discount.
GRAB THE BEST PAPER

Let us find you another Term Paper on topic Putting The Bully In His Place. Causes, Consequences and Possible Solutions to Bullying for FREE!