Comments (0)
Add to wishlist Delete from wishlist
Cite this document
Summary
The paper "Cultural Awareness of Israel" describes that Israel has progressed towards peace reconciliation in the last few years but severe conflicts in the region make the process difficult. There seems to be no apparent solution to the problem in the near future…
Download full paper File format: .doc, available for editing
HIDE THIS PAPERGRAB THE BEST PAPER94.7% of users find it useful 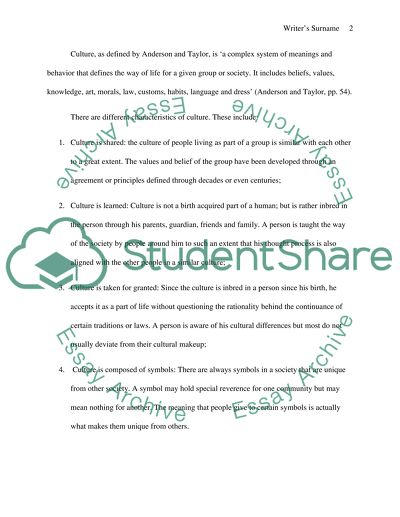 Download file to see previous pages The culture of Israel is unique in the sense that it is the only country in the world with a majority of the Jewish community.
Culture, as defined by Anderson and Taylor, is ‘a complex system of meanings and behavior that defines the way of life for a given group or society. It includes beliefs, values, knowledge, art, morals, law, customs, habits, language and dress’ (Anderson and Taylor, pp. 54).
1. Culture is shared: the culture of people living as part of a group is similar to each other to a great extent. The values and belief of the group have been developed through an agreement or principles defined through decades or even centuries;
2. Culture is learned: Culture is not a birth acquired part of a human; but is rather inbred in the person through his parents, guardian, friends and family. A person is taught the way of the society by people around him to such an extent that his thought process is also aligned with the other people in a similar culture;
3. Culture is taken for granted: Since the culture is inbred in a person since his birth, he accepts it as a part of life without questioning the rationality behind the continuance of certain traditions or laws. A person is aware of his cultural differences but most do not usually deviate from their cultural makeup;
4. Culture is composed of symbols: There are always symbols in a society that is unique from other society. A symbol may hold a special reverence for one community but may mean nothing for another. The meaning that people give to certain symbols is actually what makes them unique from others.
5. Culture is dynamic: As people migrate from one area to another, they take their cultural belongings with them. Their thoughts, ideas and opinions travel with them and infuse in the thoughts, ideas and opinions of the people they meet. In this manner, cultures continue evolving and are dynamic in nature (Anderson and Taylor, pp. 54-48). ...Download file to see next pages Read More
Share:
Tags
Cite this document
(Cultural Awareness of Israel Coursework Example | Topics and Well Written Essays - 1750 words, n.d.)
Cultural Awareness of Israel Coursework Example | Topics and Well Written Essays - 1750 words. https://studentshare.org/culture/1613126-cultural-awareness-of-israel

CHECK THESE SAMPLES OF Cultural Awareness of Israel

6 Pages (1500 words) Coursework
sponsored ads
Save Your Time for More Important Things
Let us write or edit the coursework on your topic "Cultural Awareness of Israel" with a personal 20% discount.
GRAB THE BEST PAPER

Let us find you another Coursework on topic Cultural Awareness of Israel for FREE!