Comments (0)
Add to wishlist Delete from wishlist
Cite this document
Summary
The purpose of this literature review is to develop a thorough understanding of a contemporary issue of increasing importance in Institutional Human Resource Management. The topic basically focuses on cross-cultural training emphasizing on the role of human resources in globalisation…
Download full paper File format: .doc, available for editing
HIDE THIS PAPERGRAB THE BEST PAPER93.6% of users find it useful 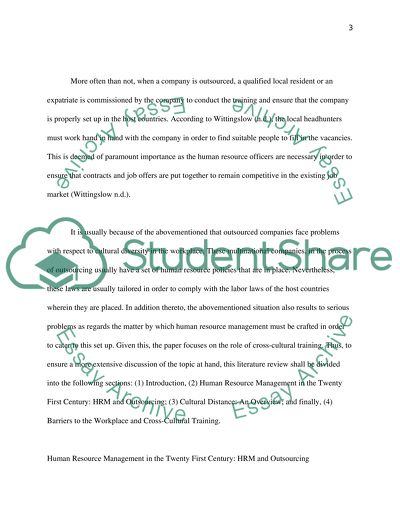 Download file to see previous pages Outsourcing poses a number of advantages to so-called host countries as this provides job opportunities for the local residents. In addition thereto, the local governments also earn revenues because of taxes and trade. Consequently, outsourcing is also poses a number of advantages for the company in question, because of this process, a new structure is provided for these organisations which enable them to cut down their productivity costs. To ensure maximum benefits related thereto, human resources employed by these multinational countries must be trained appropriately in order to conform to the business needs, Doye (2002) discusses.
More often than not, when a company is outsourced, a qualified local resident or an expatriate is commissioned by the company to conduct the training and ensure that the company is properly set up in the host countries. According to Wittingslow (n.d.), the local headhunters must work hand in hand with the company in order to find suitable people to fill in the vacancies. This is deemed of paramount importance as the human resource officers are necessary in order to ensure that contracts and job offers are put together to remain competitive in the existing job market (Wittingslow n.d.).
It is usually because of the abovementioned that outsourced companies face problems with respect to cultural diversity in the workplace. These multinational companies, in the process of outsourcing usually have a set of human resource policies that are in place. Nevertheless, these laws are usually tailored in order to comply with the labor laws of the host countries wherein they are placed. In addition thereto, the abovementioned situation also results to serious problems as regards the matter by which human resource management must be crafted in order to cater to this set up. Given this, the paper focuses on the role of cross-cultural training. Thus, to ensure a more extensive discussion of the topic at hand, this literature review shall be divided into the following sections: (1) Introduction, (2) Human Resource Management in the Twenty First Century: HRM and Outsourcing; (3) Cultural Distance: An Overview; and finally, (4) Barriers to the Workplace and Cross-Cultural Training. Human Resource Management in the Twenty First Century: HRM and Outsourcing Human Resource Management is often defined as the manner by which human talent is effectively and efficiently used in order to achieve the goals of the organisation (Mathis and Jackson 2007). It is the essential art of the process by which the organisation focuses on the people who belong to the latter. Tayeb (2005) mentions that whilst the aforementioned is usually the accepted definition of human resource management, the manner by which the same is carried out differs from one country to another. The traditional concept of human resource management has however, evolved. With the outsourcing of labor Tayeb (2005) believes that the human resource department plays a much bigger role. Generally, there are two cases by which the human resourc ...Download file to see next pages Read More
Share:
Tags
Cite this document
(“Cross-cultural Training Essay Example | Topics and Well Written Essays - 3250 words”, n.d.)
Retrieved from https://studentshare.org/culture/1415936-cross-cultural-training

CHECK THESE SAMPLES OF Cross-cultural Training

...CHANGE MANAGEMENT IMPROVING TRAINING & DEVELOPMENT TABLE OF CONTENTS Page 3 2 Diagnosis 4 3 Need for Change 5 4 Criteria for Change 5 4.1 Motivation 5 4.2 Creating a Vision 6 4.3 Developing Political Support 6 4.4 Managing Transition 7 4.5 Sustaining Momentum 7 5 Organisational Leadership 8 6 Human Relation Management 9 7 Recommendations 10 8 Bibliography 11 1 Abstract A diagnosis has been made of the situation at CF&F where there is a crisis due to high scale changes in both the top and middle management set-up. This has caused disruption and dissatisfaction both at the supervisory and worker levels. Strategic changes are necessary for retaining competitive advantage...
7 Pages (1750 words) Case Study

As a function of this, this book proved to be a pivotal and seminal work within the genre of cross-cultural understanding as, even though it was a novel, it helped to open the eyes of many in and around the country as to the unique set of situations that individuals experienced as a function of not only being bi-racial and living in a juxtaposition of two alternate societies but attempting to draw a sense of personal identity between the two and forging a third as a result. Furthermore, although not the express intent of the book, the issues of assimilation and the firm choice that the second generation immigrant must make between the culture of their parents and the unique aspects of the culture that they have been raised into.
sponsored ads
Save Your Time for More Important Things
Let us write or edit the essay on your topic "Cross-cultural Training" with a personal 20% discount.
GRAB THE BEST PAPER

Let us find you another Essay on topic Cross-cultural Training for FREE!