Effects on the Federal Workforce and Other Sectors - Essay Example

Comments (0)
Add to wishlist Delete from wishlist
Cite this document
Summary
This essay "Effects on the Federal Workforce and Other Sectors" analyzes the understanding of how the government shutdown occurs, as well as its adverse effects on the federal employees, public, and business institutions that are involved in providing goods and services to the federal government…
Download full paper File format: .doc, available for editing
HIDE THIS PAPERGRAB THE BEST PAPER97.4% of users find it useful 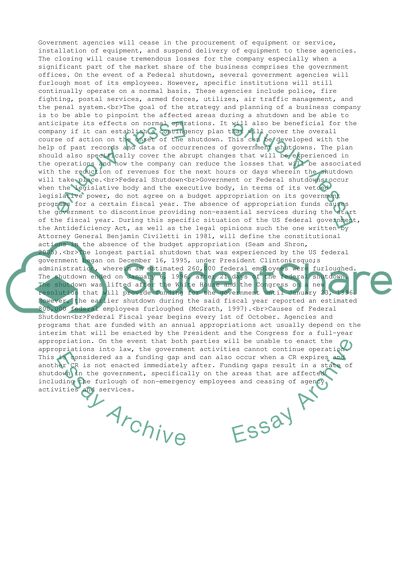 Extract of sample "Effects on the Federal Workforce and Other Sectors"

Download file to see previous pages Government agencies will cease in the procurement of equipment or service, installation of equipment, and suspend delivery of equipment to these agencies. The closing will cause tremendous losses for the company especially when a significant part of the market share of the business comprises the government offices. On the event of a Federal shutdown, several government agencies will furlough most of its employees. However, specific institutions will still continually operate on a normal basis. These agencies include police, fire fighting, postal services, armed forces, utilizes, air traffic management, and the penal system.
The goal of the strategy and planning of a business company is to be able to pinpoint the affected areas during a shutdown and be able to anticipate its effects on normal operations. It will also be beneficial for the company if it can establish a contingency plan that will cover the overall course of action on the onset of the shutdown. This can be developed with the help of past records and data of occurrences of government shutdowns. The plan should also specifically cover the abrupt changes that will be experienced in the operations and how the company can reduce the losses that will be associated with the reduction of revenues for the next hours or days wherein the shutdown will take place.
Federal Shutdown
Government or Federal shutdowns occur when the legislative body and the executive body, in terms of its vetoed legislative power, do not agree on a budget appropriation on its government programs for a certain fiscal year. The absence of appropriation funds causes the government to discontinue providing non-essential services during the start of the fiscal year. During this specific situation of the US federal government, the Antideficiency Act, as well as the legal opinions such the one written by Attorney General Benjamin Civiletti in 1981, will define the constitutional actions in the absence of the budget appropriation (Seam and Shron, 2005).
The longest partial shutdown that was experienced by the US federal government began on December 16, 1995, under President Clinton’s administration, wherein an estimated 260,000 federal employees were furloughed. The shutdown ended on January 6, 1996, after 21 days of the federal shutdown. The shutdown was lifted after the White House and the Congress on a new resolution that will provide funding for the government until January 23, 1996. However, the earlier shutdown during the said fiscal year reported an estimated 800,000 federal employees furloughed (McGrath, 1997).
Causes of Federal Shutdown
Federal Fiscal year begins every 1st of October. Agencies and programs that are funded with an annual appropriations act usually depend on the interim that will be enacted by the President and the Congress for a full-year appropriation. On the event that both parties will be unable to enact the appropriations into law, the government activities cannot continue operation. This is considered as a funding gap and can also occur when a CR expires and another CR is not enacted immediately after. Funding gaps result in a state of shutdown in the government, specifically on the areas that are affected including the furlough of non-emergency employees and ceasing of agency activities and services. ...Download file to see next pages Read More
Share:
Tags
Cite this document
(“Strategy and Plans of Operation on the Event of a Government Shutdown Essay”, n.d.)
Strategy and Plans of Operation on the Event of a Government Shutdown Essay. Retrieved from https://studentshare.org/business/1450818-week

“Strategy and Plans of Operation on the Event of a Government Shutdown Essay”, n.d. https://studentshare.org/business/1450818-week.
Comments (0)
Click to create a comment or rate a document

Nearly twenty percent of the hospitals in 2001 had registered nurse vacancy rates in excess of twenty percent. The survey conducted on behalf of the American Hospital Association in 2001 showed that 126,000 full-time registered nurse positions were not filled. The following year in 2002 the U.S. Department of Health and Human Services that the number of states in the United States of America experiencing registered nurse shortages had gone up to thirty. The consequences of the shortage of nurses on the nursing professionals as evaluated by studies showing that the nursing professionals were experiencing burnouts, stress, and lack of job satisfaction, which was likely to compound the issue of shortage of nursing professionals. The...
10 Pages (2500 words) Case Study

It is observed that electroplating and chemical industries are responsible for the generation of a considerable portion of emissions that contain heavy metals, and may affect adversely on human lives and environment. On the other hand, sugar, pharmaceuticals, and textile industries are responsible for the generation of organic pollutants in the atmosphere. Refineries, fertilizers, stone mines, and thermal power units are mainly the causing sectors of contributing a substantial amount of air pollution in the Turkish atmosphere. In specific, sulfur, nitrogen, and hydrogen sulfide are some of the main pollutants that are generated from the burning of fuels in the abovementioned industries in Turkey. Though vehicular sources also cont...
7 Pages (1750 words) Case Study

Despite the few negative incidences of crime committed by the United States of America’s security troops that were deployed in the country on a peacekeeping mission.
Since the war in Korea began in the early nineteen fifties, the United States has stationed tens of thousands of soldiers, mostly the United States’ army personnel, in South Korea. Through the assistance of the South Korean troops and other neighboring governments, the American troops have been able to guard and offer maximum security to South Korean people. In line with the argument of James (2003), ‘most of the military bases in South Korea are relatively isolated’ thus the need for much attention from the troops so as to ensure maximum...
10 Pages (2500 words) Assignment
sponsored ads
Save Your Time for More Important Things
Let us write or edit the essay on your topic "Effects on the Federal Workforce and Other Sectors" with a personal 20% discount.
GRAB THE BEST PAPER

Let us find you another Essay on topic Effects on the Federal Workforce and Other Sectors for FREE!