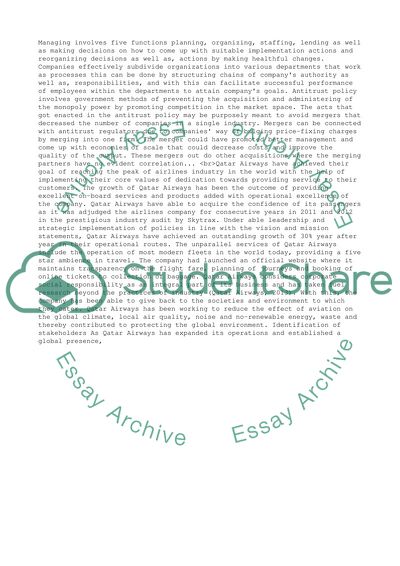 Download file to see previous pages Managing involves five functions planning, organizing, staffing, lending as well as making decisions on how to come up with suitable implementation actions and reorganizing decisions as well as, actions by making healthful changes. Companies effectively subdivide organizations into various departments that work as processes this can be done by structuring chains of company’s authority as well as, responsibilities, and with this can facilitate successful performance of employees within the departments to attain company’s goals. Antitrust policy involves government methods of preventing the acquisition and administering of the monopoly power by promoting competition in the market space. The acts that got enacted in the antitrust policy may be purposely meant to avoid mergers that decreased the number of companies in a single industry. Mergers can be connected with antitrust regulators due to companies’ way of bulging price-fixing charges by merging into one firm. The merger could have promoted better management and come up with economies of scale that could decrease costs and improve the quality of the output. These mergers out do other acquisitions where the merging partners have no evident correlation...
Qatar Airways have achieved their goal of reaching the peak of airlines industry in the world with the help of implementing their core values of dedication towards providing service to their customers. The growth of Qatar Airways has been the outcome of providing excellent on-board services and products added with operational excellence of the company. Qatar Airways have able to acquire the confidence of its passengers as it was adjudged the airlines company for consecutive years in 2011 and 2012 in the prestigious industry audit by Skytrax. Under able leadership and strategic implementation of policies in line with the vision and mission statements, Qatar Airways have achieved an outstanding growth of 30% year after year in their operational routes. The unparallel services of Qatar Airways include the operation of most modern fleets in the world today, providing a five star ambience in travel. The company had launched an official website where it maintains transparency on the flight fare, planning of journeys and booking of online tickets to collection of baggage. Qatar Airways considers corporate social responsibility as an integral part of its business and has taken fuel research beyond the practices of industry (Qatar Airways, 2013). With this, the company has been able to give back to the societies and environment to which they cater. Qatar Airways has been working to reduce the effect of aviation on the global climate, local air quality, noise and no-renewable energy, waste and thereby contributed to protecting the global environment. Identification of stakeholders As Qatar Airways has expanded its operations and established a global presence, ...Download file to see next pagesRead More
Share:
Tags
Cite this document
(“Company analysis of Qatar Airways Research Paper”, n.d.)
Retrieved from https://studentshare.org/business/1404238-company-analysis-of-qatar-airways-through-their

CHECK THESE SAMPLES OF Company analysis of Qatar Airways

In th...
8 Pages(2000 words)Case Study
sponsored ads
Save Your Time for More Important Things
Let us write or edit the research paper on your topic "Company analysis of Qatar Airways" with a personal 20% discount.
GRAB THE BEST PAPER

Let us find you another Research Paper on topic Company analysis of Qatar Airways for FREE!