Comments (1)
Add to wishlist Delete from wishlist
Cite this document
Summary
With progressive needs for ethical considerations for business development, several issues emerge that largely point to capitalism in business spheres. In a more concise and Elaborative manner, this paper discusses the capitalist business perceptions and ethical issues that dominate the business sector. …
Download full paper File format: .doc, available for editing
HIDE THIS PAPERGRAB THE BEST PAPER92.3% of users find it useful 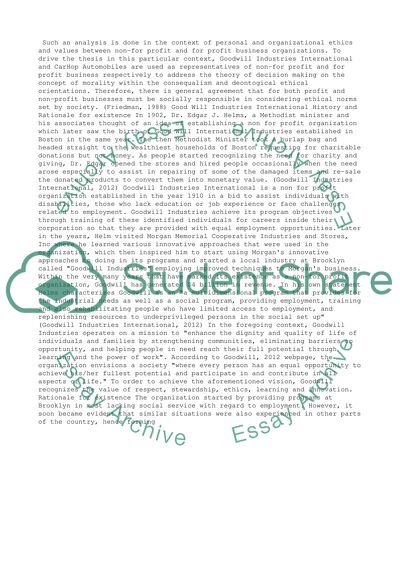 Extract of sample "Analysis of Personal and Organizational Ethics"

Download file to see previous pages Such an analysis is done in the context of personal and organizational ethics and values between non-for profit and for profit business organizations. To drive the thesis in this particular context, Goodwill Industries International and CarHop Automobiles are used as representatives of non-for profit and for profit business respectively to address the theory of decision making on the concept of morality within the consequalism and deontogical ethical orientations. Therefore, there is general agreement that for both profit and non-profit businesses must be socially responsible in considering ethical norms set by society. (Friedman, 1988) Good Will Industries International History and Rationale for existence In 1902, Dr. Edgar J. Helms, a Methodist minister and his associates thought of an idea of establishing a non for profit organization which later saw the birth of Good Will International Industries established in Boston in the same year. The then Methodist Minister took a burlap bag and headed straight to the wealthiest households of Boston requesting for charitable donations but not money. As people started recognizing the need for charity and giving, Dr. Edgar opened the stores and hired people occasionally when the need arose especially to assist in repairing of some of the damaged items and re-sale the donated products to convert them into monetary value. (Goodwill Industries International, 2012) Goodwill Industries International is a non for profit organization established in the year 1910 in a bid to assist individuals with disabilities, those who lack education or job experience or face challenges related to employment. Goodwill Industries achieve its program objectives through training of these identified individuals for careers inside their corporation so that they are provided with equal employment opportunities. Later in the years, Helm visited Morgan Memorial Cooperative Industries and Stores, Inc where he learned various innovative approaches that were used in the organization, which then inspired him to start using Morgan’s innovative approaches to doing in its programs and started a local industry at Brooklyn called “Goodwill Industries” employing improved techniques to Morgan’s business. Within the very many years that have marked its existence as a non-for profit organization, Goodwill has generated $4 billion in revenue. In his own statement Helms characterizes Goodwill as an “a multidimensional program that provides for the industrial needs as well as a social program, providing employment, training and also rehabilitating people who have limited access to employment, and replenishing resources to underprivileged persons in the social set up” (Goodwill Industries International, 2012) In the foregoing context, Goodwill Industries operates on a mission to “enhance the dignity and quality of life of individuals and families by strengthening communities, eliminating barriers to opportunity, and helping people in need reach their full potential through learning and the power of work”. According to Goodwill, 2012 webpage, the organization envisions a society “where every person has an equal opportunity to achieve his/her fullest potential and participate in and contribute in all aspects of life.” To order to achieve the aforementioned vision, Goodwill recognizes the value of respect, stewardship, ethics, learning and innovation. Rationale for existence The organization started by providing programs at Brooklyn in most lacking social service with regard to employment. However, it soon became evident that similar situations were also experienced in other parts of the country, hence forming ...Download file to see next pages Read More
Share:
Tags
Cite this document
(“Analysis of Personal and Organizational Ethics Research Paper”, n.d.)
Analysis of Personal and Organizational Ethics Research Paper. Retrieved from https://studentshare.org/business/1401971-buy-here-pay-here-carlots-and-good-will-industries

“Analysis of Personal and Organizational Ethics Research Paper”, n.d. https://studentshare.org/business/1401971-buy-here-pay-here-carlots-and-good-will-industries.
Comments (1)
Click to create a comment or rate a document

da
daphneoconner added comment 1 year ago
Student rated this paper as
This paper saved me today. I liked the style. It was very useful for my business course.

CHECK THESE SAMPLES OF Analysis of Personal and Organizational Ethics

Advantages: The primary advantage of this scheme is the inducement and motivation of workers for higher efficiency and great output. It is better th...
6 Pages (1500 words) Assignment

An ethical scenario arose during my first six months in this management role involving a 21-year-old employee who I witnessed smoking pot in the parking lot over lunch break. This scenario demanded that I consider the needs of the employee, as well as satisfying my obligations for enforcing the strict drug use policy administered at the senior levels of the company. This project describes the ethical scenario in detail, offering personal reflections on the incident as well as suggesting an ethical framework for handling situations like this in the future.
The situation which occurred had a young worker smoking pot on his lunch break on the company grounds. This, according to policy, is a termination offense and it is expected...
7 Pages (1750 words) Case Study
sponsored ads
Save Your Time for More Important Things
Let us write or edit the research paper on your topic "Analysis of Personal and Organizational Ethics" with a personal 20% discount.
GRAB THE BEST PAPER

Let us find you another Research Paper on topic Analysis of Personal and Organizational Ethics for FREE!