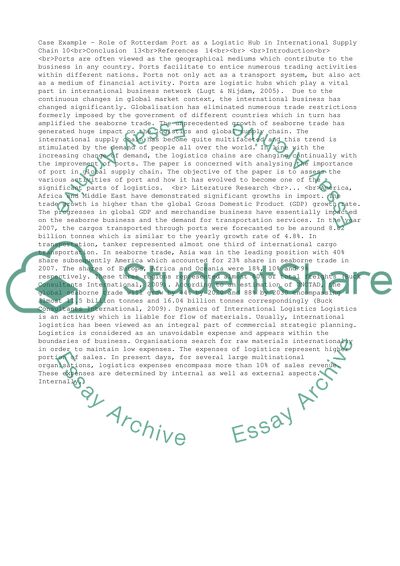 Ports are often viewed as the geographical mediums which contribute to the business in any country. Ports facilitate to entice numerous trading activities within different nations. Ports not only act as a transport system, but also act as a medium of financial activity. Ports are logistic hubs which play a vital part in international business network (Lugt & Nijdam, 2005). Due to the continuous changes in global market context, the international business has changed significantly. Globalisation has eliminated numerous trade restrictions formerly imposed by the government of different countries which in turn has amplified the seaborne trade. The unprecedented growth of seaborne trade has generated huge impact on the logistics and global supply chain. The international supply chain has become quite multifaceted and this trend is stimulated by the demand of people all over the world. In line with the increasing change of demand, the logistics chains are changing continually with the improvement of ports. The paper is concerned with analysing the importance of port in global supply chain. The objective of the paper is to assess the various activities of port and how it has evolved to become one of the significant parts of logistics.
Literature Research
...
America, Africa and Middle East have demonstrated significant growths in import. The trade growth is higher than the global Gross Domestic Product (GDP) growth rate. The progresses in global GDP and merchandise business have essentially impacted on the seaborne business and the demand for transportation services. In the year 2007, the cargos transported through ports were forecasted to be around 8.02 billion tonnes which is similar to the yearly growth rate of 4.8%. In transportation, tanker represented almost one third of international cargo transportation. In seaborne trade, Asia was in the leading position with 40% share subsequently America which accounted for 23% share in seaborne trade in 2007. The shares of Europe, Africa and Oceania were 18%, 10% and 9% respectively. These three regions represented almost 80% of total freights (Buck Consultants International, 2009). According to an estimation of UNCTAD, the global seaborne trade will grow by 44% by 2020 and 88% by 2030 encompassing almost 11.5 billion tonnes and 16.04 billion tonnes correspondingly (Buck Consultants International, 2009). Dynamics of International Logistics Logistics is an activity which is liable for flow of materials. Usually, international logistics has been viewed as an integral part of commercial strategic planning. Logistics is considered as an unavoidable expense and appears within the boundaries of business. Organisations search for raw materials internationally in order to maintain low expenses. The expenses of logistics represent higher portion of sales. In present days, for several large multinational organisations, logistics expenses encompass more than 10% of sales revenue. These expenses are determined by internal as well as external aspects. Internally, ...Download file to see next pagesRead More
Share:
Tags
Cite this document
(“Critically Analyse the Evolving Role of Ports as Logistics Hubs in Essay”, n.d.)
Retrieved from https://studentshare.org/business/1398733-critically-analyse-the-evolving-role-of-ports-as

(Critically Analyse the Evolving Role of Ports As Logistics Hubs in Essay)
https://studentshare.org/business/1398733-critically-analyse-the-evolving-role-of-ports-as.

“Critically Analyse the Evolving Role of Ports As Logistics Hubs in Essay”, n.d. https://studentshare.org/business/1398733-critically-analyse-the-evolving-role-of-ports-as.
Comments (0)
Click to create a comment or rate a document

..., which celebrated man’s relationship with nature and the wilderness it encompasses within. He helped to define an American sensibility about the land, setting it apart from European traditions. Durand’s influence hastened the decline of history painting in the mid 19th century and the rise in popularity of landscape paintings, which were increasingly considered great works of art. Durand was influenced by the British critic John Ruskin and advocated a naturalistic approach to landscape. At the age of 16, in the year 1817, Durand became a trainee to Peter Maverick, a well established artist of those times. In the middle decade of the 19th Century, landscape painting dominated the American art. Beginning with Thomas Cole, an English born...
7 Pages(1750 words)Essay

As a matter of fact, Hoffman’s statement that “international affairs is the nemesis of liberalism” has a grain of truth in it and this is especially so after the 9/11 incident.
There are two schools of thought or perspectives that are used to view international affairs: liberalism and realism. The study of these two perspectives is significant to the idea posed by Stanley Hoffman because they determine the reasons why international affairs, according to him, does not only see eye-to-eye with liberalism but seems to stand on the opposing side of it.
Liberalism can be defined as having four elements: citizens; the legislature; property rights, and; a market-driven economy (Dunne 186). Realism, on the othe...
6 Pages(1500 words)Assignment
sponsored ads
Save Your Time for More Important Things
Let us write or edit the essay on your topic "Critically Analyse the Evolving Role of Ports as Logistics Hubs in International Supply Chains" with a personal 20% discount.
GRAB THE BEST PAPER

Let us find you another Essay on topic Critically Analyse the Evolving Role of Ports as Logistics Hubs in International Supply Chains for FREE!