Comments (0)
Add to wishlistDelete from wishlist
Cite this document
Summary
THE NERVOUS SYSTEM NAME INSTITUTION DATE From the practical conducted, it is clear that blowflies lay their eggs on decaying material, such as the carcasses of dead animals. Larvae hatch from eggs and this is a temperature dependent process. Larvae – the maggots - have an outer cuticle and an inner epithelia basement membrane (Sawin, Harris, Campos, & Sokolowski, 1994, p…
Download full paperFile format: .doc, available for editing
HIDE THIS PAPERGRAB THE BEST PAPER94.4% of users find it useful 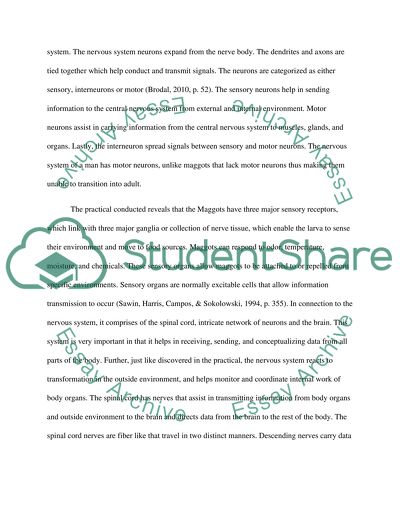 Download file to see previous pages In connection to the practical with the central nervous system of maggots, it is significant to note that Maggots have one unique feature: that is they keep on recycling especially when it comes to their neurons. Equipped with a nervous system that helps them to crawl and feed, they change into intricate animals with sophisticated behaviors and sensory system such as flying and walking. Maggots lack motor neurons that can make the transition into adult. During metamorphosis, the neurons start to spread and seek out adult links. In order to understand the central nervous system of a maggot, it is significant to look at the role that hormones play in initiating these intricate behaviors required to molt. Eclosion hormone is an insect neurohormone that makes the larvae to initiate the intricate behaviors required to molt in that it assists in removing an exoskeleton in order to mobilize the needed changes in the entire central nervous system. The nervous system neurons expand from the nerve body. The dendrites and axons are tied together which help conduct and transmit signals. The neurons are categorized as either sensory, interneurons or motor (Brodal, 2010, p. 52). The sensory neurons help in sending information to the central nervous system from external and internal environment. Motor neurons assist in carrying information from the central nervous system to muscles, glands, and organs. Lastly, the interneuron spread signals between sensory and motor neurons. The nervous system of a man has motor neurons, unlike maggots that lack motor neurons thus making them unable to transition into adult. The practical conducted reveals that the Maggots have three major sensory receptors, which link with three major ganglia or collection of nerve tissue, which enable the larva to sense their environment and move to food sources. Maggots can respond to odor, temperature, moisture, and chemicals. These sensory organs allow maggots to be attached to or repelled from specific environments. Sensory organs are normally excitable cells that allow information transmission to occur (Sawin, Harris, Campos, & Sokolowski, 1994, p. 355). In connection to the nervous system, it comprises of the spinal cord, intricate network of neurons and the brain. This system is very important in that it helps in receiving, sending, and conceptualizing data from all parts of the body. Further, just like discovered in the practical, the nervous system reacts to transformation in the outside environment, and helps monitor and coordinate internal work of body organs. The spinal cord has nerves that assist in transmitting information from body organs and outside environment to the brain and directs data from the brain to the rest of the body. The spinal cord nerves are fiber like that travel in two distinct manners. Descending nerves carry data concerning the motor function from the brain to other body parts. The ascending nerves transmit data from the body to the brain (Brodal, 2010, p. 89). In order to aid their movement, the maggot can respond to light since they have photoreceptors on their heads and can move towards light, known as positive photo taxis. First instar animals have negative photaxic responses and third instars are positive phototaxic in nature. The rate of ...Download file to see next pagesRead More
Share:
Tags
Cite this document
(“Nervous system Essay Example | Topics and Well Written Essays - 750 words”, n.d.)
Nervous system Essay Example | Topics and Well Written Essays - 750 words. Retrieved from https://studentshare.org/biology/1468077-nervous-system
(Nervous System Essay Example | Topics and Well Written Essays - 750 Words)
Nervous System Essay Example | Topics and Well Written Essays - 750 Words. https://studentshare.org/biology/1468077-nervous-system.
“Nervous System Essay Example | Topics and Well Written Essays - 750 Words”, n.d. https://studentshare.org/biology/1468077-nervous-system.
Comments (0)
Click to create a comment or rate a document

CHECK THESE SAMPLES OF Nervous system

In order to compare the welfare system of the three proposed countries, it is important to first develop a comparative method that would guide in comparing the three states. For the purpose of this paper, a binary comparison would be conducted. The implicit comparison would deal with Britain while the explicit comparison would explore the USA and Canada. Thereby a small N’ study would be used, that is, of three countries.
The three countries selected to share a similarity in the form that these countries are a welfare state. This is when welfare is mainly funded by the state. While the USA and Canada focus on the liberal welfare state, the welfare state of the UK is not quite defined.
The comparison of the welfare...
8 Pages(2000 words)Term Paper
sponsored ads
Save Your Time for More Important Things
Let us write or edit the essay on your topic "Nervous system" with a personal 20% discount.
GRAB THE BEST PAPER

Let us find you another Essay on topic Nervous system for FREE!