Comments (1)
Add to wishlistDelete from wishlist
Cite this document
Summary
This paper aims to analyze the plot segmentation of the movies "Pulp Fiction". Doing the plot segmentation was important towards understanding the structure and narrative of the film. The film begins with where it will end. …
Download full paperFile format: .doc, available for editing
HIDE THIS PAPERGRAB THE BEST PAPER91% of users find it useful 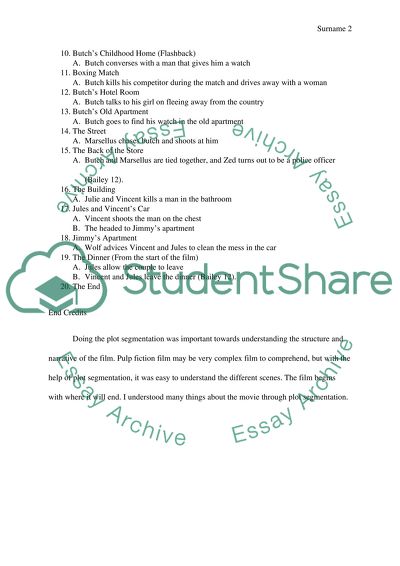 Plot Segmentation of Pulp Fiction The Dinner A. A couple is just sitting at the dinner talking B. They talk about robberies
C. The begun to rob the dinner and at the same time the scene is interrupted
C. Credits
2. The Car
A. The men in suits are sitting in a car talking about drugs
B. The two men get out of the vehicle with guns
C. They converse regarding entering a room and start shooting (Bailey 5).
3. The Building
A. The two men still talk as they walk towards the building
B. They stop by the room, and they make the decision, it was the time to enter
C. The men’s names are disclosed as Vincent and Jules
4. The Bar
A. Butch is sitting in the bar talking to somebody
B. Vincent and Jules enter the bar
C. Butch and Vincent ran into each other (Bailey 6)
5. Lance’s Apartment
A. Two men are talking about piercings and Vincent shows up
B. Vincent was here to purchase drugs
6. Marsellu’s House
A. Vincent arrives to take Mia and Vincent makes some drink
7. Jack Rabbit Slim’s
A. Mia and Vincent arrive at Jack Rabbit Slim restaurant
B. They both dance for a competition
8. Marsellu’s House (Part 2)
A. Mia is driven by Vincent to Lance’s apartment
9. Lance’s Apartment (Part 2)
A. Mia is taken to apartment by Vincent and Lance and was given a shot of adrenaline (Bailey 11)
10. Butch’s Childhood Home (Flashback)
A. Butch converses with a man that gives him a watch
11. Boxing Match
A. Butch kills his competitor during the match and drives away with a woman
12. Butch’s Hotel Room
A. Butch talks to his girl on fleeing away from the country
13. Butch’s Old Apartment
A. Butch goes to find his watch in the old apartment
14. The Street
A. Marsellus chases butch and shoots at him
15. The Back of the Store
A. Butch and Marsellus are tied together, and Zed turns out to be a police officer (Bailey 12).
16. The Building
A. Julie and Vincent kills a man in the bathroom
17. Jules and Vincent’s Car
A. Vincent shoots the man on the chest
B. The headed to Jimmy’s apartment
18. Jimmy’s Apartment
A. Wolf advices Vincent and Jules to clean the mess in the car
19. The Dinner (From the start of the film)
A. Jules allow the couple to leave
B. Vincent and Jules leave the dinner (Bailey 12).
20. The End
End Credits
Doing the plot segmentation was important towards understanding the structure and narrative of the film. Pulp fiction film may be very complex film to comprehend, but with the help of plot segmentation, it was easy to understand the different scenes. The film begins with where it will end. I understood many things about the movie through plot segmentation.
Work Cited
Bailey, Jason. Pulp Fiction: The Complete Story of Quentin Tarantinos Masterpiece. , 2013. Print. Read More
Share:
Tags
Cite this document
(“Plot Segmentation of Pulp Fiction Movie Review Example | Topics and Well Written Essays - 250 words”, n.d.)
Retrieved from https://studentshare.org/visual-arts-film-studies/1701705-plot-segmentation-of-pulp-fiction

ru
ruben91 added comment 4 months ago
Student rated this paper as
The topic of "Plot Segmentation of Pulp Fiction" was hard to find. I spent ages to find it. Here at StudentShare, I got the best example. Many thanks!

CHECK THESE SAMPLES OF Plot Segmentation of Pulp Fiction

How Pulp Fiction can be read as postmodern

...?With reference to Frederic Jameson’s “Postmodernism, or The Cultural Logic of Late Capitalism,” write an analysis of how Pulp Fiction (film, 1994, by Tarantino) can be read as postmodern. The film Pulp Fiction was an immediate box office success when it was released in 1994 and it was also well received by the critics, and celebrated for the way it appeared to capture exactly a certain pre-millennial angst and dislocation in Western capitalist societies. The term post-modernist, often used to refer to art and architecture, was applied to this film, and there was even a new word made specially to reflect this, namely “pulpmodernist.”1 The phrase pulp fiction refers to popular novels which are bought in large numbers by less well educated...
6 Pages(1500 words)Essay

...? Quentin Taratino’s Pulp Fiction is movie about time and violence and redemption. In its use of nonlinear narrative and through its excellent characterizations and dialogue, the film succeeds on many levels, not the least of which is through its ability to entertain throughout with visceral and often violent images, only to turn those very themes into food for thought as the film ends. Tarantino directs the movie with the famously fan-boy film gusto he is known for. Although he has never made a director audio commentary on his films, one suspects that it is almost unnecessary. His film’s techniques are fairly simple: place skilled and well-cast actors in funky cool scenarios and give them great dialogue to speak. However...
3 Pages(750 words)Essay

... Marketing Segmentation With the current growth of technology, marketing has taken a different perspective in respect to technology. Many organizations have failed to realize effective marketing due to lack of technology and proper research. One of the strategies through which effective marketing has been realized is through segmentation. Market segmentation is the dividing of a market into customer brackets which binding factors are their identical needs. Each bracket in the division would be the market’s base target attainable through a unique marketing outfit. Segments are the portions attained after considering the various variables that include age, gender, and societal class in terms of income generation, attitudes, and opinions...
8 Pages(2000 words)Term Paper

... Pulp Fiction Review The Film Pulp Fiction by Quentin Tarantino is regarded by a significant number of contemporary critics as well as audiences as one of the most iconic and influential films of all time. It is regarded to have impeccable cinematography, unconventional structure , direction, camera shots and self reflexivity of the pictures. The fact that it is a progressive narrative, its application of heavy violence, and dialogues, enables it to surpass conventional films, and make an impression. Tarantino manages to efficiently stage manage cinematography, editing, mise-en-scence, in addition to sound to generate unique effects, shadow traits of the characters, maintain the suspense of events, and most importantly entertain (Jewers...
5 Pages(1250 words)Research Paper

Pulp Fiction and the Rejection of Film Noir Pessimism

...Ron Sagi Pulp Fiction and the Rejection of Film Noir Pessimism Pulp Fiction has been compared to film noir due to its populace of low-lifes, gangsters, and boxers. While the film does play around the edges of the traditional of film noir, it cannot accurately be claimed as a traditional example of film noir due to several liberties it takes with some of the most foundational aspects of the genre. In addition to liberties with such visual and narrative devices as having been shot in color and upending the expectations of the femme fatale, the most conspicuous and prominent departure from the framework of film noir is the insistence on rejecting the ovearching pessimism expected from film noir. The most obvious break from traditional film...
3 Pages(750 words)Movie Review

...Check out the big brain on Brett Macro analysis of a 14 minute sequence from Quentin Tarantinos Pulp Fiction (1994) The narrative structure of thisfilm sequence from Quentin Tarantinos "Pulp Fiction" (1994) seems to be a pretty straightforward example of the Crime & Gangster genre in film noir style: the scene starts with a promise of danger and murderous action. Two tough and cool modern gangsters ("Jules" played by a Samuel L. Jackson sporting a hairstyle that looks menacingly like pubic hair and "Vincent" played by John Travolta with a Prince Valiant haircut) arrive at some seedy city destination. They take handguns out from the cars boot and talk about maybe needing shotguns. Thus the movie viewer knows something is about to happen...
4 Pages(1000 words)Essay

... College: Plot Summary Based on Aristotle’s idealistic analysis of tragic plays, the plot should be single with complications and not double, with opposing endings like in comedies where there is good and bad. The tragedy must follow the main action, which refers to the protagonist’s main goal. Further, according to the philosopher, all plots usually have some form of suffering or pathos, but complex ones incorporate elements like recognition and reversal. The plot represents the core of the play and it can be split into three elements. The first element is the reversal, also referred to as the peripeteia. This occurs when an action by the protagonist produces an effect that contravenes the expected effect. For instance, in Oedipus Rex...
1 Pages(250 words)Essay

..., the cinematography is excellent, at least to a layman like me. The angle is perfect and the shots are amazing. Third, the plot may be a complex and intertwined but it is certainly a good plot. Another strength of the movie is that it is clearly a reflection of the meaningless, senseless pattern of events in our present society nowadays. Without the occasional, what is revealed Among the weaknesses of this movie, perhaps the most unpopular is the one where there is a tendency of people to look for a good ending but Pulp Fiction simply does not have one. The movie is a combination of scenes that do not particularly revolve around one topic. Another weakness of the movie is the strange flashbacks, where everything goes back to the scene...
8 Pages(2000 words)Essay

...Market Segmentation of Shipping Station Marketing Plan: Shipping Station The market segmentation of the shipping industry is based on the service purchase behavior of the shippers. Taking into consideration the type of service required, the Shipping Station customers can be segmented into three primary customer groups: shipping customers, fax customers, and mailbox customers. Shipping Customers This shipping customers segment can further be subdivided into clients who are in need of a packaging service, and clients whose packages are ready for shipment. The conventional customer that requires shipment of a package is one who cannot access shipping services at their place of work and are inconvenienced by the Post Office, or require to ship...
1 Pages(250 words)Essay
sponsored ads
Save Your Time for More Important Things
Let us write or edit the movie review on your topic "Plot Segmentation of Pulp Fiction" with a personal 20% discount.
GRAB THE BEST PAPER

Let us find you another Movie Review on topic Plot Segmentation of Pulp Fiction for FREE!