Comments (0)
Add to wishlistDelete from wishlist
Cite this document
Summary
This research will explain how the travel and tourism sector in the UK today has developed in response to changes in the industry and society. The essay aims to pay special attention to the factors behind the increase in demand for and supply of tourism in the UK…
Download full paperFile format: .doc, available for editing
HIDE THIS PAPERGRAB THE BEST PAPER96.4% of users find it useful 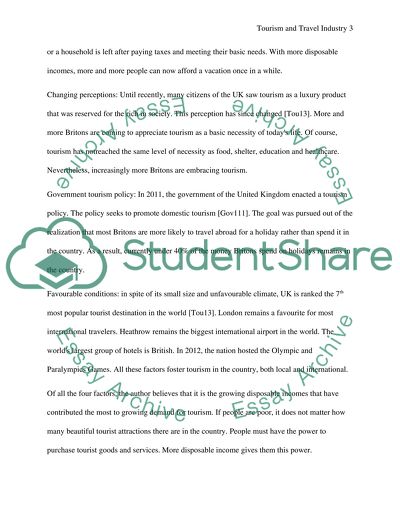 Download file to see previous pages The paper tells that in 2012, the United Nations World Tourism Organization reported that 1.035 billion international visits were made in 2011, resulting in expenditure in excess of $1 trillion.In the UK, 134 billion Sterling pounds were spent on tourism. This figure represented an increase of 6.9% in 2011. Demand for tourist goods and services in the UK has increased substantially during the past few decades. The growth has been so steady that even in the aftermath of the worldwide economic downturn of 2008, tourism earning grew by 6.9% to reach 134 billion Sterling pounds in 2012, compared to 2011 earnings. In absolute terms, the sector earned 9 billion pounds more than it did in 2011. This amount of money is enough to create 180,000 new jobs in the UK. The following paragraphs explain the factors behind this growth. Growing disposable incomes: The disposable of the average British worker has grown tremendously since the Second World War. Disposable income is the income that an individual or a household is left after paying taxes and meeting their basic needs. With more disposable incomes, more and more people can now afford a vacation once in a while. Changing perceptions: Until recently, many citizens of the UK saw tourism as a luxury product that was reserved for the rich in society. This perception has since changed. More and more Britons are coming to appreciate tourism as a basic necessity of today's life. Of course, tourism has not reached the same level of necessity as food, shelter, education, and healthcare. Nevertheless, increasingly more Britons are embracing tourism. Government tourism policy: In 2011, the government of the United Kingdom enacted a tourism policy. The policy seeks to promote domestic tourism. The goal was pursued out of the realization that most Britons are more likely to travel abroad for a holiday rather than spend it in the country. ...Download file to see next pagesRead More
Share:
Tags
Cite this document
(“The Travel and Tourism Sector in the UK in Response to Changes in the Assignment”, n.d.)
Retrieved from https://studentshare.org/tourism/1662245-the-travel-and-tourism-industry
(The Travel and Tourism Sector in the UK in Response to Changes in the Assignment)
https://studentshare.org/tourism/1662245-the-travel-and-tourism-industry.
“The Travel and Tourism Sector in the UK in Response to Changes in the Assignment”, n.d. https://studentshare.org/tourism/1662245-the-travel-and-tourism-industry.
Comments (0)
Click to create a comment or rate a document

...? Travel In Canada: Canada's Tourism Industry Travel In Canada: Canada's Tourism Industry Introduction The tourism industry in Canada has had many developments in the 21st century. This is due to the many features that categorize the country and the proximity to the United States. The government of the country makes a lot of effort to put it on the grid to receive many visitors every year. This effort has seen it rise in ranks in tourist levels over the years. One of the activities that the country has carried out is the promotion in terms of their media activities. To carry out effective media coordination, there is the involvement through magazines and newspaper articles Summary The article, Discover Canada with the Help of Canadians...
5 Pages(1250 words)Book Report/Review

Changes in the Travel and Tourism Market

...?PORTFOLIO Investigate the change of one market: product or service over the last 5 years. You are expected to analyse how Economic and Technological factors contribute to these changes [eg sport clothes, butter, travelling, and delivery]. Travel and tourism is a major industry worldwide and contributes immensely to both, the local economy and global economy has a whole. The last five years has been roller coaster ride in travel and tourism markets. The pendulum has consistently swung both ways with respect to boom and decline in the tourism trends worldwide. The trends are very indifferent when compared to different parts of the world. It is a market that is very important for any economy and is capable of creating more jobs per million...
8 Pages(2000 words)Assignment

The travel and tourism sector

...?The Travel and Tourism Sector Examine the historic developments in the field of travel and tourism with reference to the contribution of technological and economic developments, including the industrial revolution over the last two years Leisure tourism was a common thing even in the Egyptian and Babylonian empires. Most of the travelling had to do with visiting religious temples. In those days most people travelled by foot, with only the wealthy being borne in litters from place to place. Many centuries later, in the fourth century, even had advertisements posted on city walls which informed people travelling to religious festivals about the available inns in the towns of Sparta, Athens and Troy. During the era of the Roman Empire, Roman...
10 Pages(2500 words)Coursework

... over the past half century (Yasumura, 2002). Thus, tourism has indeed emerged as an "industry" which, according to the World Tourism Organization, in 1989 generated approximately 74 million jobs in its direct and service-related industries, such as airlines, hotels, travel services, and publications (WTO, 2002). But recently tourism is recognized as a social phenomenon with a variety of social-cultural impacts at both the individual level and the global level, and it is a pronounced and significant reality that all social sciences undertake. The study of tourism and its changes reflect the advent of new approaches and ways of thinking in modern society. The changes in tourism mirror the changes from modern society to post-modern society...
32 Pages(8000 words)Coursework

The travel, tourism and hospitality industry has been growing steadily at a rapid pace. Technology has accelerated growth in entirely different ways in the travel industry. With the Internet explosion, globalization and more people willing to travel, this industry has been evolving rapidly to cater to the customers. Information Communication Technologies and the Internet continue to revolutionize the industry. They are now being touted as major distribution agent for the entire sector. Companies are now utilizing this tool to expand their market and increase their market share by trying to better their relationship with the customer and manage it effectively.
With the increasing competitiveness in the industry, mergers and ac...
15 Pages(3750 words)Essay

Importance of the UK travel and tourism industry

...Importance of the UK travel and tourism industry After three years of downturn for the tourism industry, it robustly rebounded in 2004 with more than 760 million arrivals globally - an increase of around ten per cent over 2003. This was indeed a welcome change after three years of stagnation following the September 11 attacks, the SARS crisis and the Iraq war, almost all destination markets recorded substantial growth. Tourism is one of the largest industries of the world, and has recorded spectacular growth, aided by the global economies showing optimistic turnarounds. Its importance to the economy and employment cannot be emphasized enough. Tourism is one of the largest industries in the UK, accounting for 3.5% of the UK economy...
4 Pages(1000 words)Essay

Travel and Tourism Industry of London

Appendices 36
ALL THE TABLES AND FIGURES
Tables and figures
1.0 Introduction
The travel and tourism industry is among the oldest and largest industry in the world, and the industry has been growing significantly faster than most other industries. Globalisation has led to...
18 Pages(4500 words)Assignment

Employment in the Travel and Tourism Industry

Travel and Tourism is one of the world's largest industries when taken as a whole, and provides employment directly and indirectly to millions of people worldwide through many associated service industries (Buckinghamshire Chilterns). A very wide industry, it includes government tourism departments, immigration and customs services, travel agencies, airlines, tour operators, hotels etc and many associated service industries such as airline catering or laundry services, guides, interpreters, tourism promotion and sales etc. Travel and Tourism enterprises include major internationals with a workforce of thousands, to the small private travel agent with a handful of employees.
Employment in the travel and tourism industry...
6 Pages(1500 words)Essay

The development of travel and tourism industry

This paper outlines also the current developments of tourism. Low cost airlines
“Evidence in the Europe and the U.S. indicates that the leading LFAs [low-fare airlines] fared significantly better than their full-fare rivals in the wake of the terrorist attacks on the U.S.,” wrote Thomas Lawton, author of Cleared for Take-Off: Structure and Strategy in the Low-Fare Airline Business, in the November 2003 Irish Journal of Management. “While established rivals cut staff, grounded aircraft and even collapsed into bankruptcy, the LFAs continue to open new routes and order new aircraft. LFAs are more resilient than traditional airlines to market downturns.”
Europe deregulated its skies in 1997 and there has been no looking back...
8 Pages(2000 words)Dissertation

...Travel and Tourism PERSONAL MENT Introduction My is Eva PLEASE WRITE YOUR SUR HERE, and I belong to PLEASE WRITE THE OF YOUR COUNTRY HERE. Having qualified as a PLEASE WRITE YOUR EDUCATIONAL QUALIFICATIONS HERE, I wish to fulfill my dream of joining the airlines as a member of the cabin crew. It is of prime importance to me to connect with my unique purpose in life, and I look forward to deriving profound satisfaction from achieving my career goals. I believe in the words of the famous philosopher Thoreau (1854: xl) who stated that “If one advances confidently in the direction of his dreams, and endeavours to live the life which he has imagined, he will meet with a success unexpected in common hours”. The following personal statement...
3 Pages(750 words)Essay
sponsored ads
Save Your Time for More Important Things
Let us write or edit the assignment on your topic "The Travel and Tourism Sector in the UK in Response to Changes in the Industry and Society" with a personal 20% discount.
GRAB THE BEST PAPER

Let us find you another Assignment on topic The Travel and Tourism Sector in the UK in Response to Changes in the Industry and Society for FREE!